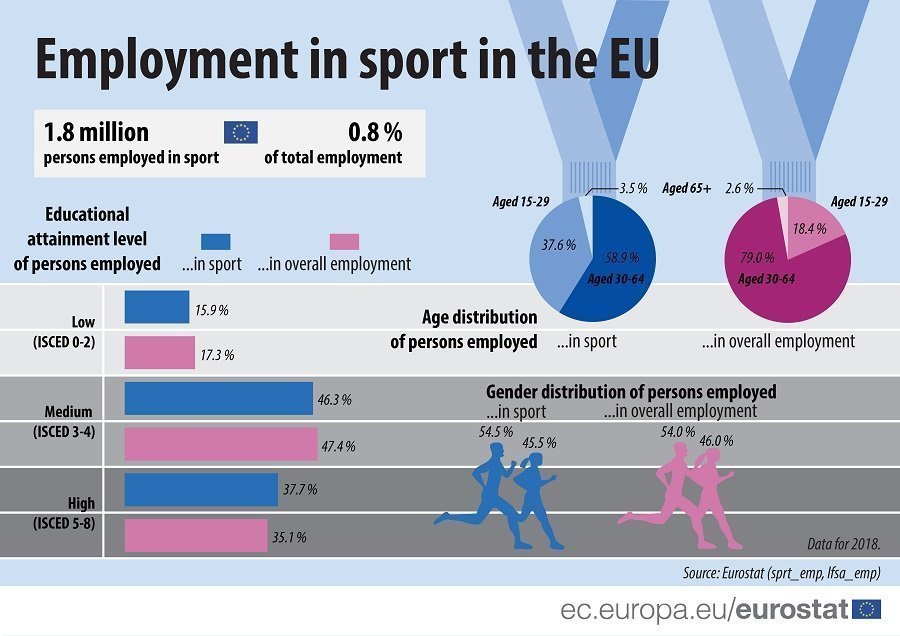 In 2018, employment in sport represented 0.8 % of total EU employment, ranging from 0.1% in Romania to 1.7% in Sweden  For the majority of EU Member States, sport employment shares reached 1% at maximum; in addition to Sweden, only in the United Kingdom, Finland, Ireland  and Spain, did this share exceeded 1%.

Around 46% of persons employed in sport have a medium educational attainment level, 38% have a high level  and 16% have a low level.

Between 2013 and 2018, employment in sport rose by 3.2% in terms of annual average growth rate (AAGR), in comparison to 1.4% observed for total employment.

In 2018, women accounted for 45% of employment in sport in the EU, reflecting the structure of the total employed population (46% female). A large part of EU Member States recorded women as a minority of people employed in sport, with the highest differences (with over two-thirds of men in sport employment) in Slovenia (68%) and Slovakia (72%). On the other side, more women than men worked in sport in Latvia and Finland (55% for women), Sweden (54%), Germany and Hungary (52%) and Denmark (51%). Two EU Member States had a 50% tie for both sexes: the Netherlands and Poland. In Cyprus this rate is around 38%.

Finally, between 2013 and 2018 , the percentage of tertiary education graduates employed in sport rose in the EU as a whole from 33% in 2013 to 38% in 2018, as well as in all Member States for which data are sufficiently reliable for both years, except Greece, Lithuania and Germany.