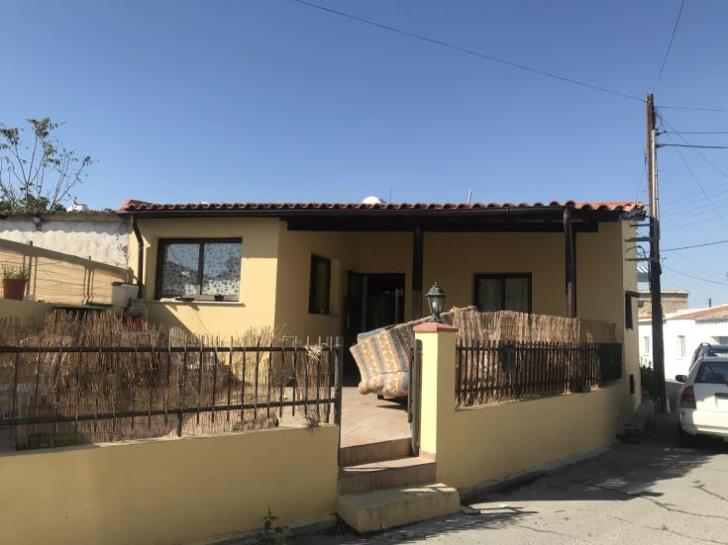 An insignificant reason was the motive behind the crime a 13-year-old committed, killing his nine-year-old sister as a result; an appalling act which has shocked the entire Cypriot community. The 13-year-old confessed to his actions yesterday morning along with the reason why he acted so and is now in the hands of the Mental Health Services, as he has been judged to be criminally irresponsible.

According to the autopsy carried out yesterday by coroners Nicolas Charalambous and Sophocles Sophocleous, four injuries that injured vital organs of the girl’s body were detected along with another 11 traumas on various parts of her body.

The nine-year-old, however, according to testimonies provided by the police, despite her traumas, managed to walk a few steps from the inside of the house and exit the main entrance. She then walked 3-4 steps, and called for help with all her strength. “I saw her trying to grab the railings of the veranda. She was calling for help. Then I saw her fall. I’m almost incompetent to walk. I went home,” an elderly woman whose home is opposite the home where the tragedy took place told Phileleftheros Newspaper. And she added: “About half an hour – 40 minutes passed. I heard voices again, namely someone calling out ‘Maria, Maria’. To be precise she was screaming. I took my walking stick and peered from my door. I saw the child’s father holding her in his arms and running from the veranda into the street. Soon after the ambulance came and took the child. Then we heard she had been stabbed.”

According to police sources, when the ambulance somehow managed to approach the area where the family home is located (the roads are closed due to Larnaca sewerage works), the child had no pulse and had begun to turn blue. Chronologically, the crime is said to have been committed 30 to 40 minutes before 5pm on Tuesday afternoon, where her father found his child in a pool of blood. When the Police arrived on the scene, according to information, the 13-year-old was present and looked as if he had not realised what he had done, although he verbally said that he had caused his sister’s injury, something he had confessed just before and to his 44-year-old father.

“Last night, I lost both of my children. How will I live now? How can I live?” These where the few words the 44-year-old man was able to say when we arrived at his home yesterday. He went back to his house shortly before noon yesterday, after police investigations were completed and fingerprints taken. According to police sources, the 13-year-old was born in Romania from where his father originated and came to Cyprus with his family at the age of one when they immigrated to Cyprus. He was in a high school in Larnaca. The nine-year-old was born in Cyprus, while their mother, who was also foreign, did not live with the family. According to residents, the mother regularly visited the children at home and saw her talking to them.

The state allowance the family was receiving was the only income that the father and both children had to live with. As the 44-year-old said, he has been unemployed for some time. In the past, he worked in construction or occasional handy work to attain a wage. Responding to a relevant question, he also said that on Tuesday afternoon, for some reason, had to be absent from the house for a while and unfortunately, in the little time the children where left alone, the tragedy took place.

“A quiet child who did not seem capable of ever carrying out such an act,” was the general opinion of the inhabitants of the surrounding area, who even yesterday, had difficulty believing what had happened. With open eyes and chattering, they gazed at the nine-year-old’s veranda, at the point where she had stretched out her hands and called for help before she died. There, all day yesterday morning, neighbours and parents of her Elementary School classmates came and lit candles and prayed for a while.

According to Police Deputy Press Officer, Stelios Stylianou, the 13-year-old boy is in special care, in cooperation with the Social Welfare Services.

13-year-old was in Special Unit School

Larnaca provincial school inspector, Michalis Loizidis, described the 13-year-old as a child who did not show any excessive aggression or delinquency. As he said to Phileleftheros Newspaper, the child sometimes bothered his classmates or sought attention in the wrong way, without however giving any clues towards the happenings of the tragic event.

“There was no serious incident that could have been a warning for his action,” he said. He even said that on Tuesday morning he did not give any sign that he was upset or that something else was happening. “On that same day, he had a trip with his school and there was no clue as to what was to follow.”

The teacher of the Special Unit the 13-year-old was attending approached him at the end of the day and put him in a taxi, like every other day, telling him that she would see him the next day. “We are all overwhelmed,” she said.

As Loizidis mentioned, the 13-year-old was attending a Special Unit in a primary school, after being monitored and evaluated by the Provincial Special Education Committee. The child, due to his age, changed grade and started attending a high school class. “Following a decision by the committee, he was put in a normal class for a trial period. However, after reassessing his needs and progress, it was decided he join the High School Special Unit once again. ”

As he explained, in order to do so, the 13-year-old had to be transferred to another school, as the high school he attended at that time did not have a Special Unit. Regarding the 13-year-old, Loizidis hastened to deny rumours that the child had been expelled due to his delinquency.

“I categorically deny that the child was forcibly kicked out of school,” he underlined and stressed that the 13-year-old was attending school regularly and on a daily basis, which is also contrary to other rumors that said he was walking about the streets.

As regards his attendance in the special unit, he noted that he had been examined by a competent committee. He also said that this decision was taken last year, but that the child was being followed and that they were in co-operation with the Office of Social Welfare.

By In Cyprus
Previous articleUS reaffirms policy on Cyprus’ EEZ and supports efforts for Cyprus settlement
Next article€1.164.086 in MP travel expenses