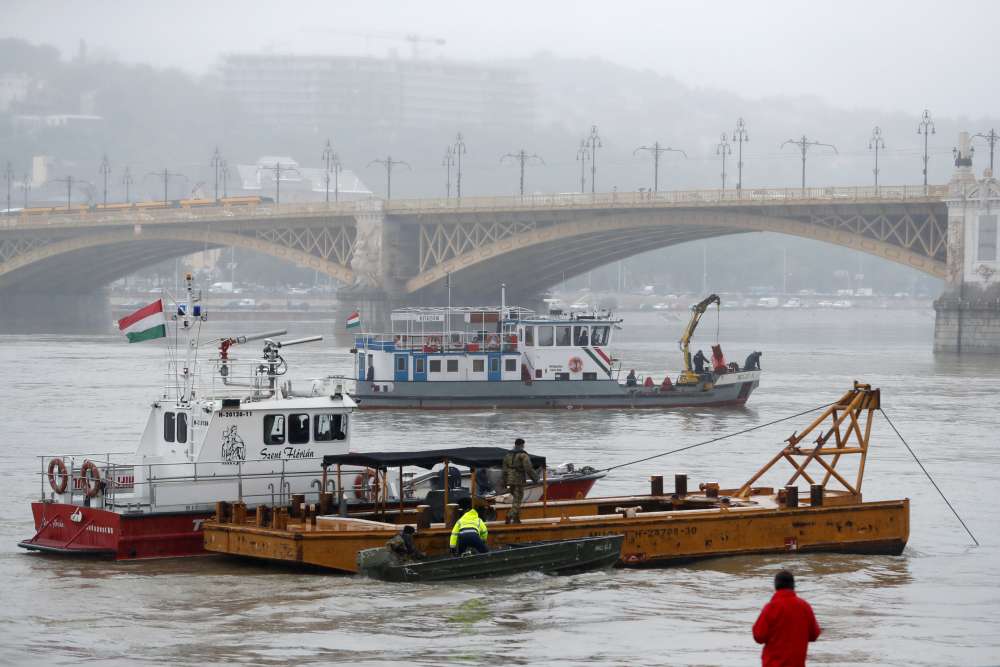 Prospects were minimal on Thursday for finding 20 people missing from a group of South Korean visitors aboard a pleasure boat that capsized on the flooding Danube in the Hungarian capital, killing at least eight, authorities said.

The boat reportedly collided with another tourist vessel near the Hungarian parliament on Wednesday, before turning over on the river, which has been flooding, with very strong currents, while a rainstorm enveloped Budapest.

“I am not inclined to say there is no hope, so I would rather say there is a minimal chance (to find more survivors),” Pal Gyorfi, a spokesman of the Hungarian national ambulance service, told state television.

“This is not just because of the water temperature, but the strong currents in the river, the vapour above the water surface, as well as the clothes worn by the people who fell in,” he said in reply to a question about the search for the missing.

“The search is underway and we are still on the banks of the Danube river, but chances are minimal.”

In Seoul, President Moon Jae-in said South Korea would work with the Hungarian government to investigate the cause of the accident.

“What’s most important is speed,” Moon told an emergency meeting, at which he urged the use of all diplomatic channels to ensure speedy search and rescue operations.

The foreign ministry said the South Koreans aboard the vessel when it sank were 30 tourists and three tour guides, in addition to a crew of two Hungarians.

South Korea planned to send 33 officials to Budapest, including a emergency rescuers and military specialists, presidential spokeswoman Ko Min-jung said, and the government would provide counselling to victims’ families.

A massive rescue effort deployed boats, divers, spotlights, and radar scanning to scour the river for several kilometres downstream from the site of the accident, which took place soon after 9 p.m. (1900 GMT).

Journalists at the scene said they saw children’s ambulances on the riverbank.

There was a six-year-old on board, said Lee Sang-moo, an official of the South Korean travel agency that booked the group tour. But the child did not figure on the list of survivors, the agency added.

The National Ambulance Service mounted searches along a stretch of the river downstream from Budapest and was on alert along a section further south in Hungary, where all boat traffic was halted.

Television images showed the bank of the Danube closed off by police on the Pest side, across from the World Heritage site of Buda Castle.

The Danube’s flooding and currents made rescue efforts extremely difficult, a rescue diver told the state broadcaster, with water temperatures ranging between 10 and 12 degrees Celsius (50 and 54 degrees F).

The boat, the Mermaid, was a 27-m (89-ft) double-decker river cruise boat with a 150-horsepower engine and could hold up to 60 people, its owner, Panorama Deck Ltd., told state media.

“We are mobilising every resource we have to protect human lives,” it said, adding that the Mermaid had been in its fleet since 2003, with regular maintenance.

Boat registry Hajoregiszter.hu showed the ship, originally built in the Soviet Union in 1949, received a Hungarian-made new engine in the 1980s.

Neither the registry nor the operator could be immediately reached for comment on the boat’s age.

A shipping expert told state television it was likely the pleasure boat had collided with a very large vessel that had sunk it very quickly.

The hull was found on the riverbed just a few hundred metres from its usual mooring point.

By In Cyprus
Previous articleThird invitation for Cyprus Startup Visa scheme in the works, with state funding
Next articleIsrael faces fresh poll as Netanyahu fails to form government