EIB survey: Uncertainty and energy costs the major barriers for investments in Cyprus 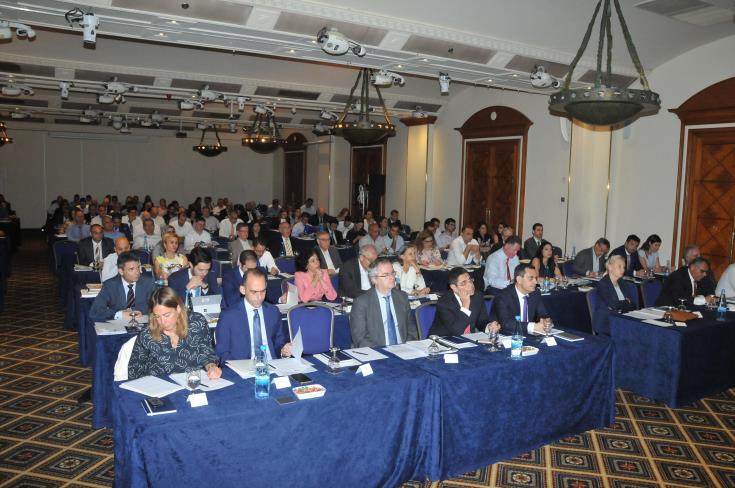 Uncertainty, energy costs, regulations, skills and access to finance are the major impediments for future investments in Cyprus according to European Investment Bank (EIB) Survey on Investment and Investment Finance for Cyprus in 2017.

The Survey was presented on Thursday by EIB Director of  Economics Department, Debora Revoltella, during an economic conference in Nicosia, organised by the EIB in cooperation with the Nicosia Chamber of Commerce and Industry.

Regarding the areas of public investment that are a necessary priority over the next three years, four in ten firms in Cyprus (38%) cited hospital/health care infrastructure. That figure was above the levels reported in any other EU country, and more than four times higher than the EU average of 8%.

According to the findings, the highest proportion of firms expecting to increase their investment in the current financial year are in the services sector. Investment outlook is still positive with no investment contraction expected in 2017. Yet, the outlook was less positive in 2017 relative to 2016.

From the six investment areas asked about, most investment in Cyprus is in machinery and equipment (39%), followed by land, business buildings and infrastructure (22%) and software, data and IT (16%). This pattern is broadly similar to the last survey’s wave as well as to the EU-wide findings.

Similar to the findings of the previous survey, the services sector has by far the highest share of firms investing in land, business buildings and infrastructure (34%).

Among all firms, almost four in ten (39%) developed or introduced new products, processes or services as part of their investment activities. The innovation in Cyprus is mostly at the local level with less than 1% of the companies innovating globally.

Firms in the services sector were more likely than others to exhibit high levels of innovation with 65% of these firms indicated that the products, processes or services were new to the firm or country, while a further 2% provided innovative solutions at the world level.

In Cyprus, 28% of the firms reported too little investments over the last three years. The particular “investment gap” is above the EU average of 15%. It is also the third largest figure across the EU.

Four in ten firms in Cyprus (42%) report operating at or above maximum capacity in the last financial year. The particular figure is below the EU average (53%).

Around nine in ten firms in Cyprus consider uncertainty about the future (90%) and energy costs (89%) as obstacles to investment activities.
Business regulations and availability of skilled staff were mentioned as barriers to investment by around seven in ten firms on average, and specifically by around 9 in 10 firms in the services sector.

While the overall pattern of results is similar to the EU, some of the investment obstacles are reported more often by firms in Cyprus. These include energy costs, availability of finance and uncertainty about the future.

In Cyprus, the 2017 EIB Investment Survey examined investment by 150 firms and identified a marked improvement in access to external financing. Only 6% of firms surveyed were “financially constrained”, which is slightly under the EU average.

Firms in Cyprus are more likely to have funded investment through internal funds (80%) than external (20%), compared to the EU average figures of 62% and 35% respectively. The particular figure of internal finance is the second largest in the EU.

Bank loans account for the highest share of external finance (81%) in Cyprus. The particular figure, is the second highest in the EU, and together with the share of other bank finance (17%), it confirms the dominant role of the banking sector in providing external finance to firms in Cyprus.

“While investment slowly recovers, there is still evidence of 20% of firms having no investment plans for the next three years, as a sign of some remaining legacy and need of transformation”, said Revoltella.

Vice President, European Investment Bank Jonathan Taylor, said that the EIB will continue to support investment both under the investment plan for Europe and with its traditional lending products, to help bring back growth and development and further improve Cyprus’ economic situation.

He also said he was pleased to say that they had a significant pipeline of EFSI related projects, up to 260 million euro, in supporting private sector investment by small and medium size enterprises for energy efficiency.

Addressing the conference the President of Nicosia Chamber of Commerce and Industry Stelios Anastasiades said that for the last six years, the European Investment Bank has been supporting Cyprus’ efforts for economic recovery and growth by promoting key investments exceeding 1 .7 billion euro with funding spread across all sectors of the Cyprus economy, including SMEs, energy, education, transport, environment, urban regeneration and many more. As he said, in 2017, EIB’s investment to the public and private sector of the island has reached over 333 million euro which amounts to 1.8% of the country’s GDP.