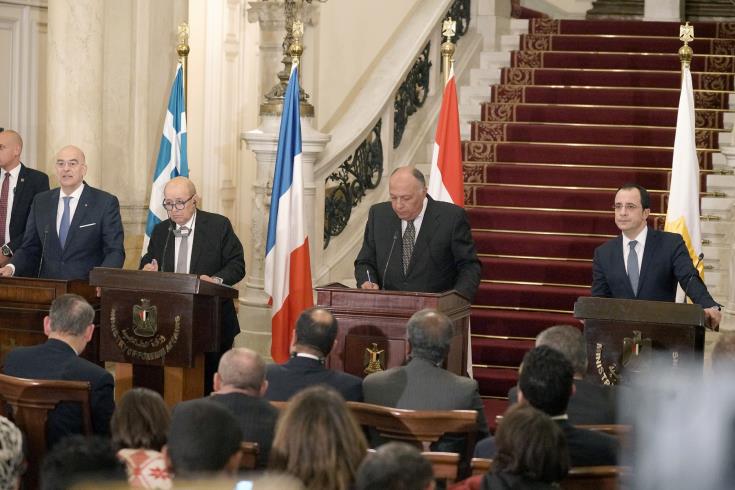 Egypt, France, Cyprus and Greece have strongly condemned continued Turkish actions in the exclusive economic zone of Cyprus and its territorial waters, have deemed that recent memoranda of understanding between Turkey and Libya to be in violation of international law and any decision to send troops to Libya to be a serious violation of UN resolutions and have called on Turkey “to act responsibly.”

The four countries’ Foreign Affairs Ministers met in Cairo on Wednesday, within the context of continued consultations and coordination, “to discuss the recent developments in the Eastern Mediterranean region in light of increased tensions that threaten peace and stability in this region,” a joint communique says, adding that they “were joined by the Italian Foreign Minister in a consultative framework.”

The Ministers, the communique reads, “stressed the strategic nature of their respective States’ relationship due to geographic, historic and cultural bonds, in full accordance with and respect of international law and the United Nations Charter.”

This relationship, it continues, “constitutes a strong basis for cooperation in multiple fields.”

The Ministers reiterated “their determination to undertake additional joint efforts in order to face increasing challenges in the Eastern Mediterranean region, at the foremost of which are armed conflict, terrorism and irregular migration.”

Furthermore, they “deemed the signing of the memorandums of understanding in November between Turkey and Mr. Fayez Sarraj the President of the Presidency Council of Libya to be a violation of relevant United Nations Security Council resolutions and international law.”

The Ministers underlined “that these memorandums have further undermined regional stability, and are both considered null and void.”

In addition, the communique adds, “the Turkey-Libya Memorandum of Understanding purporting to delimit maritime jurisdictions in the Mediterranean Sea infringes upon the sovereign rights of third States, does not comply with the Law of the Sea and cannot produce any legal consequences.”

Additionally, they reiterated “the necessity of full respect of the sovereignty and the sovereign rights of all States in their maritime zones in the Mediterranean.”

In this regard, it notes, “the Ministers strongly condemned continued Turkish actions in the exclusive economic zone of Cyprus and its territorial waters.”

“The Ministers call upon Turkey to immediately cease all illegal exploration activities,” it says.

The communique continues noting that the Ministers “deemed the security memorandum and any decision to send troops to Libya to be a serious violation of the United Nations Security Council resolution 2259 and other relevant United Nations Security Council resolutions, and a threat to regional security and stability, and called for an immediate de-escalation.”

In that context, it reads, “the four Ministers, have underlined their deep concern regarding Turkey’s recent violations of international law in the Eastern Mediterranean.”

The Ministers “affirmed that a comprehensive political solution is the only way to resolve the Libyan crisis and regain stability in Libya.”

They further “stressed their total commitment to work towards a political solution to the crisis in Libya.”

They also expressed “their keenness to avoid escalation there.”

In that context, the Ministers of the four States expressed “their support for SRSG Ghassan Salame’s efforts, to UN initiatives, and to the Berlin Process.”

They also stressed “their intent to continue mutual coordination of their positions and measures aimed to achieve the security and stability of their States and of the Eastern Mediterranean, including through fighting terrorism.”

They “affirmed that priority should be given to regional cooperation and to the comprehensive economic development that all States of the region aspire to, in full conformity with international law.”

They also “affirmed that achieving development will contribute to regional stability and prosperity, and that this objective is currently being hindered by the ongoing crises that should be earnestly resolved as soon as possible.”

Finally, they agreed “to continue their consultations and to convene their next meeting in Crete, Greece, at a date to be agreed.”

By In Cyprus
Previous articleIran both appear to signal desire to avoid further conflict
Next articleGovernment guarantees for EIB loans, tax incentives for innovation