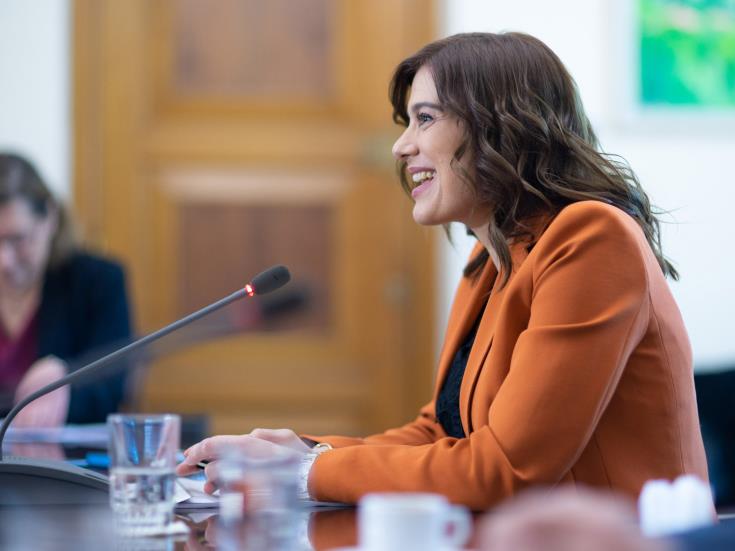 The founding members of the forum are Cyprus, Egypt, Greece, Israel, Italy, Jordan and the Palestinian Authority.

Cyprus was represented by Energy, Commerce and Industry Minister Natasa Pilides, who in her speech noted that any country or organisation in the region who share the same principles could apply to join the Forum as long as all the founding members agree unanimously for their participation.

Pilides spoke to Media after the online signing ceremony establishing the EMGF which in Cyprus took place at the Presidential Palace and said that this is a particularly important day for the seven founding members who have signed the statute and expressed hope that this day marks “a long, strong and fruitful collaboration”.

She noted that in addition to the founding countries, companies from these countries also participate in committees, where they also have an ongoing dialogue on trade issues.

“We hope that this effort will allow our region to make the best possible use of natural gas, always taking into account the environmental objectives and the responsible exploitation”, she said.

She stressed that the statute is open to all countries that have an interest in the region and which share the same principles and therefore any country interested can apply and become a member as long as all the founding members agree unanimously.

Pilides reiterated that various countries can become observers, adding that there is already interest and that there has been significant support from both the US and France as well as the EU, which was present at the ceremony, in these efforts.

The goal, the Minister noted, is to jointly exploit the natural resources that initially concern natural gas, while there is also the intention to consider whether other discussion points can be added in the second stage within the organisation, such as electricity, and renewable energy.

Concluding, she said that there is a great range of cooperation and expressed belief that soon they will promote cooperation for other means of energy as well.

Meanwhile, Egypt’s Ambassador to Cyprus Mai Taha Khalil, whose country had the initiative for the Forum, was present at the Presidential Palace on Tuesday where the ceremony took place.

Speaking to the media after the ceremony, the Ambassador said that these countries chose to have gas as a unifying catalyst for cooperation in the region instead of fighting over it.

She noted that the speed by which this agreement was signed is exceptional, saying that it was done in about a year and this shows the will and insistence of the leaders of this region to cooperate and develop for the prosperity of the people of the East Med.

Asked if this alliance is also a political one, she said that everything is political in this region, adding that you always need political will to push things forward and then you leave it to the people, to the bureaucrats, to finalise and move things forward on the ground.

Asked if she believes that Turkey can join this group given the tensions it causes in the region, she said that we are not excluding anyone to join this group as long as they abide by the values and principles of the founders of the group.

This group, she said, was not established to have a coalition against anyone, it is a group for coalition, so anyone who is willing to cooperate and not cause problems, is most welcome.