Dutch FM hopes for resumption of Cyprus talks, is convinced a settlement can be reached 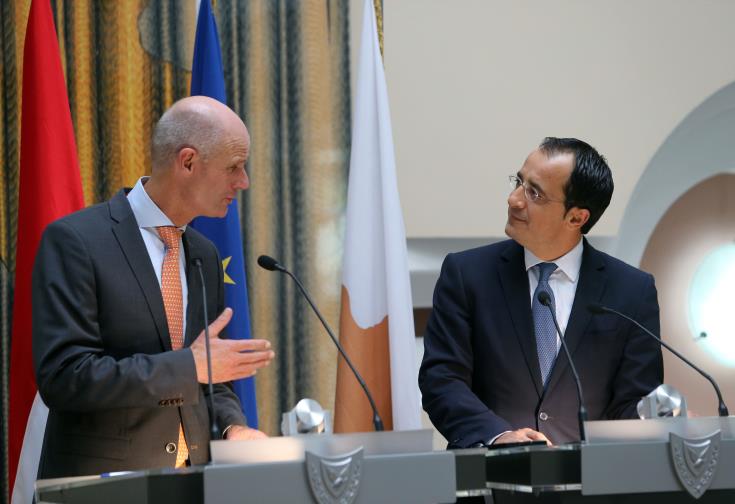 Dutch Foreign Minister Stef Blok has expressed the hope that UN Secretary General’s temporary envoy Jane Holl Lute’s consultations will lead to the resumption of Cyprus talks and said he is convinced that with the right political will and flexibility among all involved parties a settlement can be reached.

Blok who paid Cyprus a visit on Thursday was speaking during a joint press conference with his Cypriot counterpart Nicos Christodoulides at the Ministry of Foreign Affairs. On his part Christodoulides said he shared with Blok the government’s desire “for negotiations to resume soon, from the point where they were suspended in Crans-Montana and reiterated our commitment to that end.”

The Dutch FM, paid the Committee on Missing Persons (CMP) premises a visit, had a meeting with UNFICYPs head Elizabeth Spehar and was received by Cyprus President Nicos Anastasiades before having consultations with Christodoulides at the ministry.

He continued adding that “I also met with Elizabeth Spehar of the United Nations to be informed about the challenges UNFICYP faces and to listen to her perspective on the Cyprus issue.” “Very useful”, he said, “in view of our membership of the UN Security Council.”

“The Cyprus issue was also discussed during my meeting with President Anastasiades,” Blok continued, adding that the negotiations of last year already achieved important results and I sincerely hope that the temporary UN envoy, Ms Jane Holl Lute, will conclude her round of consultations with the prospect of resuming negotiations with the goal of reaching a sustainable settlement.”

“This would be of interest to all of us in the EU and I am convinced that with the right political will and flexibility among all involved parties a settlement can be reached,” he stressed.

On Brexit, he pointed out that, the impact on Cyprus and the Netherlands “will most likely be larger than in many other EU countries because of both our strong links with the UK.”

Referring to the EU budget he noted that it is a topic that is very important to the Netherlands, expressing his country’s view “that a smaller EU means a smaller EU budget.”

“Within the smaller budget it is only logical that wealthy states should pay more but not disproportionately so,” he said. According to the Dutch FM the Netherlands sees that the new EU budget as a chance to show that the EU is serious about reform, by directing funds to tomorrow’s priorities. “We can’t solve today’s problems with yesterday’s solutions,” he said.

According to Blok “we must pay more attention to priorities such as climate change, collective security, joint control of our external borders, common migration policy and research and innovation.”

On his part Christodoulides said that of the bilateral relations between the two countries that “we share common values and aspirations in a number of areas from foreign and security policy, to human rights and the protection of vulnerable groups to cooperation within the multilateral system.”

As always, the Foreign Minister added, “there is a room for further improvement and we therefore looked at ways in which we could strengthen our cooperation in fields such as trade, commerce, investment and education.”

In this regard, he pointed out, “we believe that the institutionalisation of a bilateral consultation mechanism between the two foreign ministries will provide a solid platform for discussion on how this could be achieved.”

Christodoulides continued saying that “we also had the opportunity to exchange views on issues such as the situation in Syria and the Middle East Peace process.”

“We exchanged information and ideas on how the EU and its member states can contribute more effectively to the promotion of peace and the strengthening of stability in the wider region,” he noted.

“As the Netherlands is also actively involved in the efforts to facilitate and strengthen the prospect of peace and stability in the Middle East, we have agreed to explore potential cooperation and joint action in this area,” he added.

The Minister of Foreign Affairs further said that they also discussed “a number of current issues on our common European agenda with a focus on EU relations with candidate countries, including off course Turkey, as well as Brexit as both Cyprus and the Netherlands seek to minimise the impact from the UK’s exit.”

With regard to migration, he pointed out, “I conveyed our deep concern about the latest surge in numbers of migrants and asylum seekers arriving in Cyprus.”

“We are in agreement with our Dutch counterparts that responsibility needs to be shared in the context of the Dublin regulation through a binding relocation mechanism which takes into consideration the integration capacities of each member state,” he said.

Christodoulides also said that he briefed his Dutch counterpart “on the exploration programme in Cyprus’ EEZ.” “This issue is an important component of energy security in Europe and it is particularly relevant in the context of our discussions today due to the active role that a Dutch company, Shell, has in this process,” he added.

He further expressed the government’s “deep appreciation” for the Netherlands` generous financial support of the work of CMP.

Cyprus has been divided since 1974 when Turkey invaded and occupied its northern third. Numerous UN-backed negotiations, aiming at reuniting the island under a federal roof, have failed to yield results. The latest talks under UN aegis took place in the summer of 2017 at the Swiss resort of Crans-Montana.