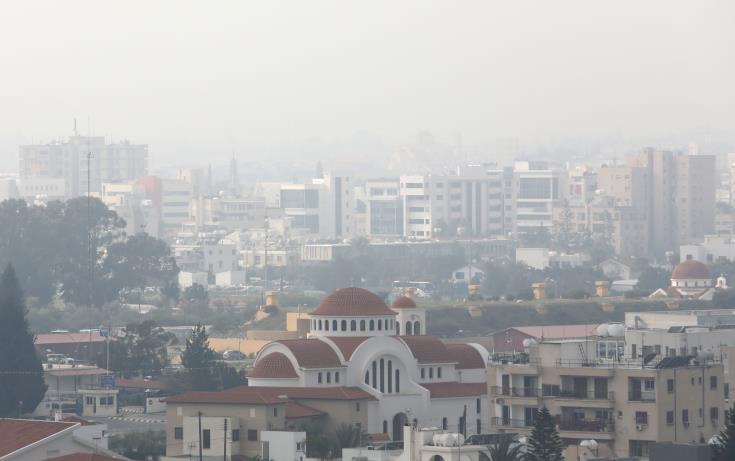 The Labour Ministry has warned vulnerable groups of increased dust in the atmosphere on Wednesday, while the met office is forecasting scattered showers and possible thunderstorms in the afternoon and evening.

In a statement on its website, the Department of Labour Inspection said that at 9 am on Wednesday, the hourly concentration of respirable particles in ambient air with diameter less than 10 micrometers (PM10), were between the maximum value of 135 μg/m3 and minimum value of 60 μg/m3 (micrograms per cubic meter).

“Consequently it is expected that the average 24 hour concentration will exceed the corresponding limit value of 50 μg/m3 as defined by the relative legislation,” it said.

Yesterday, the average 24hour concentration of respirable particles was between 57 and 81 g/m3  depending on the location.

Because of the small size of the respirable particles and their negative effect on human health, the public and especially the vulnerable groups of population (children, older people, and patients) are advised to avoid outdoor activities and exercising in open spaces during this event, the ministry said.

Meanwhile, according to the met office low pressure is affecting the region with Wednesday forecast as partly cloudy with scattered showers and possible storms expected in the afternoon, particularly in the west, the mountains and in some areas inland.

Temperatures will be 29 C inland and on the south and east coasts, 27 C on remaining coasts and 18 C in the mountains.

Scattered showers and isolated thunderstorms are forecast for tonight, initially in the west and later affecting other areas.

On Thursday, the weather will be mainly cloudy with scattered showers and isolated thunderstorms with an improvement expected later in the afternoon.

Friday and Saturday will be mainly fine with clouds at intervals. Temperatures will drop on Thursday and Friday to below average for the time of year, rising again to average on Saturday.