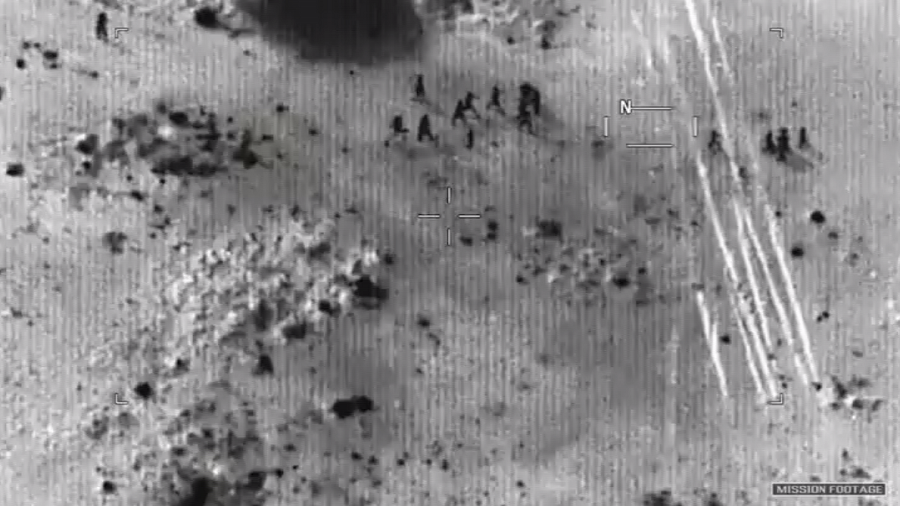 Newly released footage from the Pentagon shows how US troops ambushed in Niger prepared for their last stand, the aborted French airstrike on Islamic State militants, and friendly fire by Nigerien rescuers.
The US Department of Defense has put together a 23-minute video showing the October 4, 2017 ambush of US special forces operatives and their Nigerien hosts outside the village of Tongo-Tongo, near Niger’s border with Mali in sub-Saharan Africa.

Only 11 minutes of the video were shown to Congress last week, however. The rest, made public late Thursday, shows the surviving troops bracing for what they thought would be their last stand, and includes the footage from two unarmed US drones that arrived on the scene of the battle.

A total of 46 US and Nigerien troops were returning from a failed hunt for an Islamic State (IS, formerly ISIS) commander. They were ambushed by more than 100 IS fighters just south of Tongo-Tongo. Four Nigerien troops and four US special forces operatives were killed in the ensuing firefight.

The new video shows seven Americans and four Nigeriens fleeing on foot through a swamp, before arriving at the edge of a forest around 12:50pm local time on October 4. There, they “wrote short messages to loved ones on personal devices,”

Shortly afterward, two US drones arrive at their location. Seven minutes after that, at 13:18, two French Mirage fighters arrive to provide close air support. They can’t bomb the militants, however, because they are “unable to determine friend from foe.” They fly low over the battlefield, scattering the IS fighters.

“At this time, the enemy ceased pursuit, but remained in the area,” the video says.

Some time later, a Nigerien rescue force arrived in several trucks. However, they “mistook the team for enemy forces” and opened fire. According to the Pentagon, the shooting lasted for about 48 seconds, but did not further injure any team members. French rescue helicopters arrived at 16:55 and the team was airlifted out 30 minutes later.

The footage released last week showed the ambush as it unfolded, ending with the US and Nigerien forces escaping into the swamp.

Militants had stripped Johnson of his boots and gear, but he was killed from a distance, the Pentagon said. His body had been shot more than 20 times.

“He made his last stand, and he fought to the end,” said Major General Roger Cloutier, the US Africa Command (AFRICOM) chief of staff who led the inquiry into the ambush, according to Stars and Stripes.

AFRICOM’s probe found a number of problems with the mission. The soldiers did not spend enough time training together beforehand, did not properly prepare for the mission with Nigerien troops, and were not properly equipped to fight a well-trained enemy, the inquiry found.

The team found itself outnumbered and outgunned by the ambushing IS militants. One of the soldiers’ helmet cameras was captured by IS, which published the footage in March as part of a propaganda video.