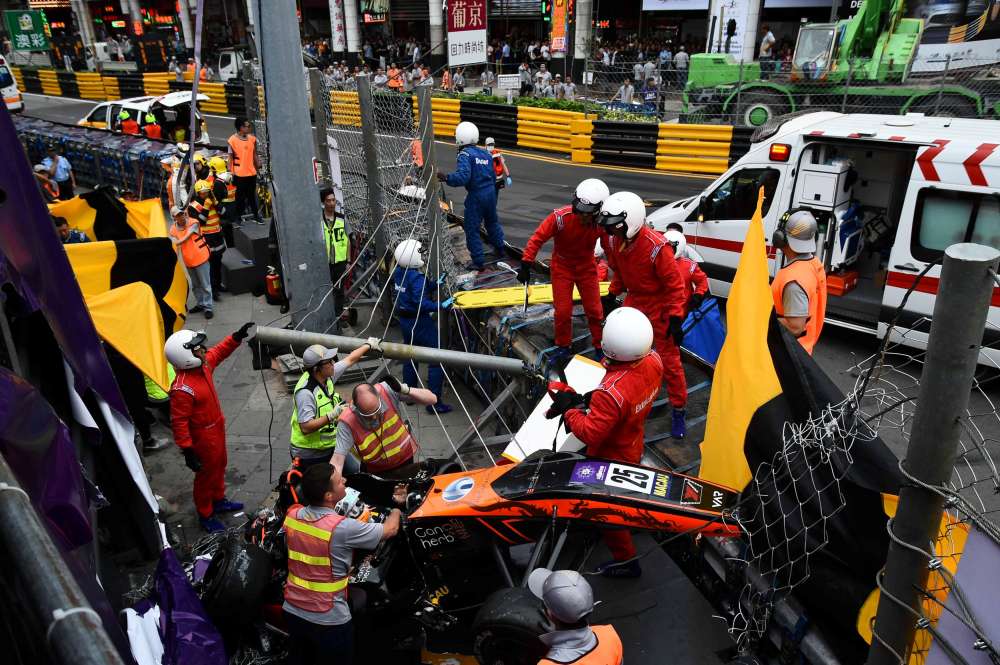 A teenage German driver has fractured her spine after suffering a horrifying airborne crash at Macau Grand Prix’s Formula Three final on Sunday.

In dramatic video footage which has been shared on social media, Sophia Floersch — who is only 17 years old — can be seen losing control of her Van Amersfoort Racing car and flying over her competitors before slamming into the track fence.

A crash in the Formula 3 Macau Grand Prix has to be seen to be believed. Early reports suggest everyone involved survived. pic.twitter.com/jc4TXOdNn0

On Twitter, Floersch thanked everyone for the messages of support.

“Just wanted to let everybody know that I am fine but will be going into Surgery tomorrow morning,” she wrote, adding that there will be an update soon.

Just wanted to let everybody know that I am fine but will be going into Surgery tomorow morning. Thanks to the @fia and @hwaag_official @MercedesAMGF1 who are taking great care of me.
Thanks to everybody for the Supporting messages.
Update soon.

In a medical report published by Van Amersfoort Racing, it says Floersch is conscious and suffered a spinal fracture as a result of the terrifying accident in the Chinese territory.

The medical report added that Floersch is “not fit to race.”

The collision with Sho Tsuboi’s TOM car, which was during the opening lap of the race, caused her to lose her wheels with the car going through the debris fencing and striking a photographers’ bunker and landing back on its wheels.

As well as Florsch’s injuries, a medical report confirmed photographer Chan Weng Wang had suffered a laceration of the liver while journalist Minami Hiroyuki had a concussion. Race marshal Chan Cha was left with a broken jaw with the driver Florsch collided with Tsuboi was complaining of back pain.

The race was eventually restarted following a delay of more than one hour as the individuals involved were attended to and the fencing was repaired.