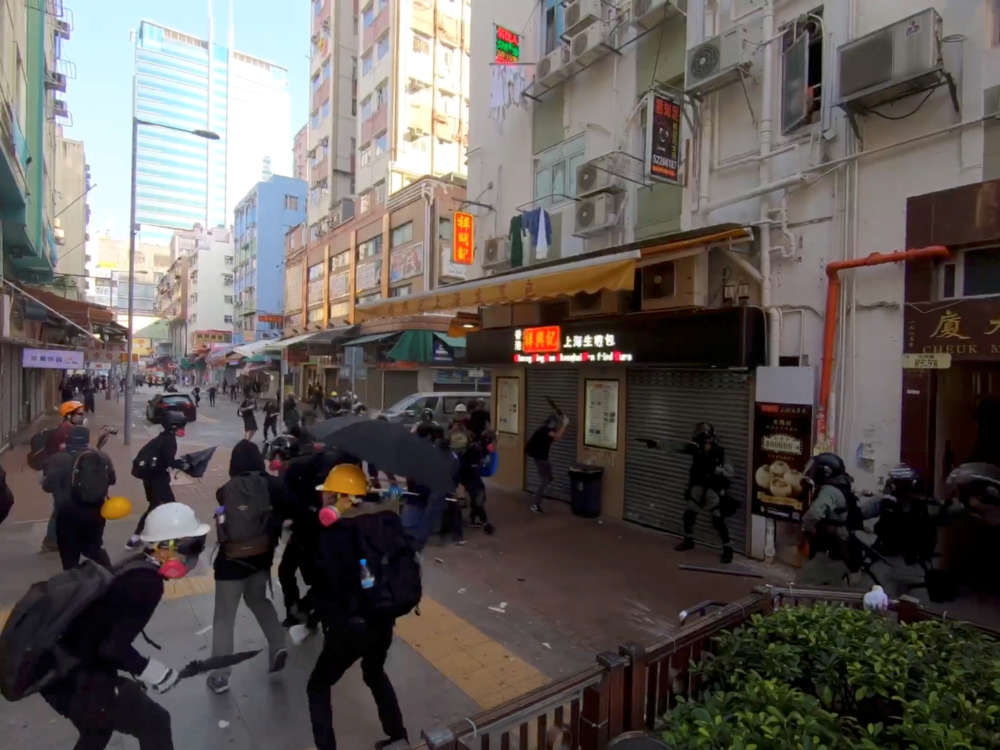 Amateur video of violent demonstrations in Hong Kong on Tuesday captures the moment when a policeman points a pistol at a black-clad protester and fires a round, after which the young man falls to the floor.

The footage, taken by students during a chaotic melee in the Tsuen Wan area of the city, is the first known instance of a protester being shot with live ammunition during weeks of clashes between police and pro-democracy campaigners.

Police confirmed that an officer opened fire at a protester, saying he was acting in self-defence.

“A large group of rioters was attacking police officers in Tsuen Wan,” police said in a statement.

“Police officers warned them, but they were still attacking police. A police officer’s life was seriously endangered. In order to save his and other officers’ lives, they fired at the attacker.”

One clip posted on social media and verified by Reuters shows the protester, an as yet unnamed 18-year-old man, swing a baton at a policeman, brushing his right arm.

When the footage is slowed down, a white flash appears at the end of the pistol barrel pointing at the protester’s chest from around a metre away. The protester stumbles over another policeman and falls on his back.

A second protester wearing a yellow construction hat rushes to the wounded man’s aid before being tackled to the ground by police.

After lying motionless for several moments, the wounded protester removes his gas mask and calls weakly for help, giving his name and saying his chest hurts and that he needs to go to hospital. A policeman then kneels beside him and begins to tend to his wound.

Protesters have been hit before with bean bags and rubber bullets and officers have fired live rounds in the air.

The incident came as thousands of protesters, some wearing Guy Fawkes masks, took to the streets to defy the city’s Chinese rulers on the 70th anniversary of the founding of the People’s Republic.