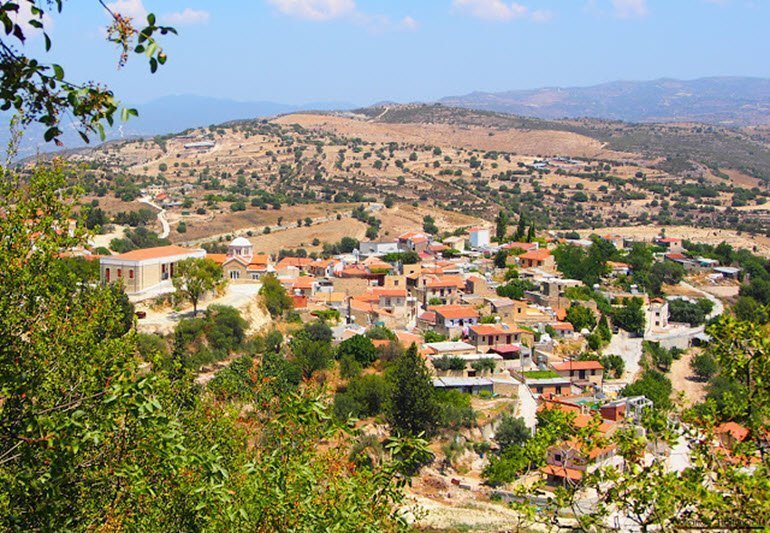 The village Dora is located 40 kilometres north-west of the city of Limassol, in the area of the wine-producing villages.

There are several interpretations regarding the etymology of the village’s name:

A. From the word “δορά” (dora) that means “derma” (skin, leather). During previous times they took the skin off the wild animals that lived in the region.
B. From the word “δωρά” or “δορά”, which means “wooded area”.
C. From the names: “Δώρος” and “Δωρίς” (Doros, Doris). During old times there were two regions in the area of Greece under the name “Doris”. One was located in mainland Greece between the areas of Fokida, Lokrida of Aitolia, and Thessalia, where the Doric tribes lived before they invaded the Peloponnese along with the Herakleidae, the other one is at the coast of Karia in Asia Minor where Doric colonists inhabited.
According to mythology, Doros, the patriarch of the Doric tribes, was the son of Ellinas and the nymph Oropida and the grandson of Defkalionas.

The Pamphyloi were one of the three Doric tribes that invaded the Peloponnese in 1100 – 1000 BC. (Dymanes and Hylleis were the other two). In the area of Dora -toward Malia and Pachna -there are ruins of a certain settlement and a temple under the name “Ais Pamfilis”.

The ancient Kares tribes used to wear some sort of cap on their heads. A similar cap with a swathe was also used by ancient Cypriots, which they named “kittaris” or “kordyli”. Dora is built at the foot of a mountain that resembles a cap and is named “Kordylas”.

From the details above we may accept that the first inhabitants of Dora were members of the Doric tribes that came to Cyprus via the Karia region of Asia Minor.

Country churches and chapels used to exist outside the village in Ais Pamfilis, Agios Andronikos, Ais Thomas (inside the cemetery), and within the village of Ais Savvas (in Tromithos).

Dora was known since the era of the franks. Georgios Voustronios reports that it was a royal estate that the King granted to whoever he wanted. In 1473 King Jacob II had granted it to the physician Zintilis who was murdered and that Queen Catherine Cornaro had granted it that same year -along with other estates of the physician -to the nobleman Philippos Apodochatoros, which she had sent to Venice as her emissary.

During the years of the Turkish rule, some Turks also inhabited Dora (at its centre, west of Agia Marina) but they were forced to move to Malia after the murder of some inhabitants of Dora -in the middle of the previous century -because of their indecent behaviour.

The rocks (terrain) of the village’s region are limestone ones.

Cereals and mainly vines of wine-making varieties are cultivated. There also are several olive-trees and many carob-trees. Close to the rivers Cha-potami in the east and Diarizos in the north-west, there are some crofts with citrus- trees and apple-trees.

A school operated for the first time in 1860, having the priest Hadjipaiannis Oikonomos from Mesogi as its first teacher and Theodoros Moditis Genas from Omodos as its second. During 1878 the folklore scientist Georgios Louka from Omodos was the teacher, while in 1907 it was Xenofon Farmakidis who had gathered plenty of folklore material -mainly from Koutsotheoris. Later on the school acquired two teachers, having three teachers from 1962 until 1967 and then four teachers. Today only one teacher works in the school and the pupils barely exceed 10.

At the village’s entrance the statue of Ntinos Pavlou , who fell while defending democracy in 1974, welcomes the visitors coming to Dora, a place that falls into decline year by year. The ruined and uninhabited houses are more than the ones that are inhabited. No motion in the streets and the plaza during the weekdays and very little during weekends. Th Association of Emigrants of Dora, in collaboration with the community council, has scheduled and has performed various projects but the state’s care and aid is necessary for the solution of various problems and for the revitalisation of the village.

Courtesy of the Community Council of Dora