Donald Trump confirms US will withdraw from Iran nuclear deal 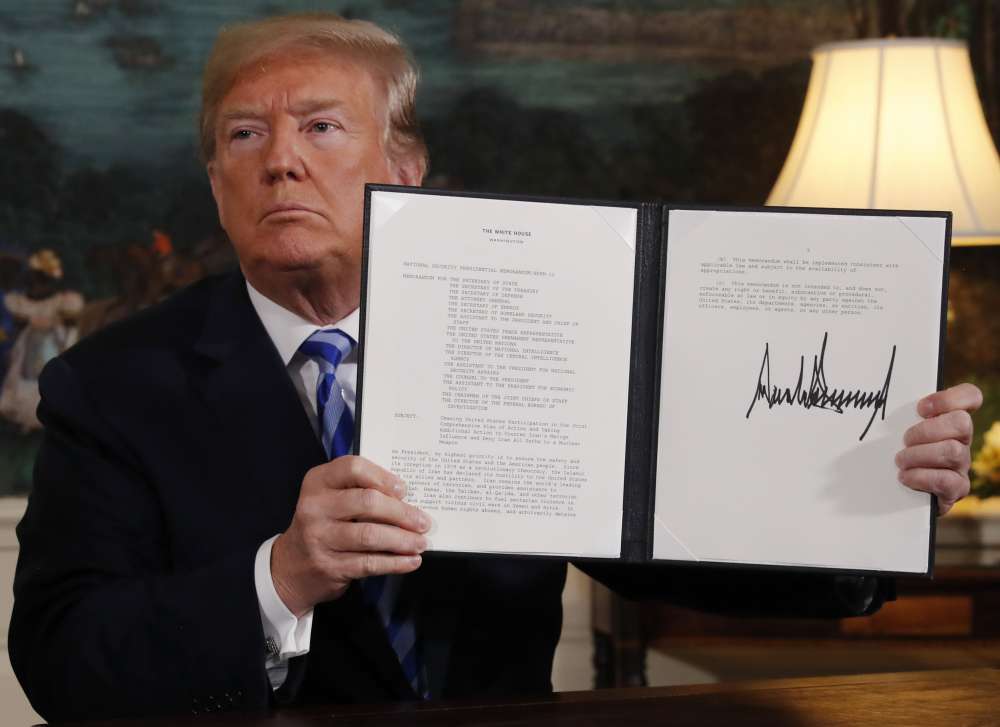 President Donald Trump has announced the US is pulling out of the landmark international nuclear accord with Iran. “The United States does not make empty threats,” he said in a televised address from the White House. Mr Trump said the 2015 agreement, which included Germany, France and Britain, was a “horrible one-sided deal that should never ever have been made”. He added that the United States “will be instituting the highest level of economic sanction”.

Mr Trump’s decision means Iran’s government must now decide whether to follow the US and withdraw or try to salvage what remains of the deal.

Iranian President Hassan Rouhani said he was sending his foreign minister to the countries remaining in the accord but warned there was only a short time to negotiate with them and his country could soon “start enriching uranium more than before”.

The leaders of Britain, Germany and France immediately urged the US not to take any actions that could prevent them and Iran from continuing to implement the agreement. The statement from Prime Minister Theresa May, Chancellor Angela Merkel and President Emmanuel Macron also urged Iran to “show restraint” and continue fulfilling its own obligations such as cooperating with inspections.

There are few issues more important to the security of the US than the potential spread of nuclear weapons or the potential for even more destructive war in the Middle East. Today’s decision to put the JCPOA at risk is a serious mistake. My full statement: https://t.co/4oTdXESbxe

In Washington, the Trump administration said it would re-impose sanctions on Iran immediately but allow grace periods for businesses to wind down activity.

The Treasury Department said there will be “certain 90-day and 180-day wind-down periods” but did not specify which sanctions would fall under which timelines. The Treasury said at the end of those periods, the sanctions will be in “full effect”.

Former US president Barack Obama called the US pullout a “serious mistake,” and warned it will erode America’s global credibility.

In his remarks, Mr Trump blasted the deal as “defective at its core”.

As evidence, he cited documents recently released by Israeli Prime Minister Benjamin Netanyahu, a leading critic of the deal.

The JCPOA was a flawed agreement which @POTUS determined is not in America’s nat’l security interests. I share his commitment that Iran must never acquire/develop a nuclear weapon. My statement –> https://t.co/qtRdxzgygC

Mr Netanyahu unveiled documents seized by Israeli intelligence showing Iran had attempted to develop a nuclear bomb in the previous decade, especially before 2003. Although he gave no explicit evidence that Iran violated the deal, he said Iran had clearly lied in the past and could not be trusted. Iran has denied ever pursuing nuclear arms.

The agreement had lifted most US and international sanctions against Iran. In return, Iran agreed to restrictions on its nuclear programme, making it impossible to produce a bomb, along with rigorous inspections.

In a burst of last-minute diplomacy, punctuated by a visit by UK Foreign Secretary Boris Johnson, the deal’s European members gave in to many of Mr Trump’s demands, according to officials, diplomats and others briefed on the negotiations. Yet they still left convinced he was likely to re-impose sanctions.

Hours before the announcement, European countries met to underline their support for the agreement. Senior officials from Britain, France and Germany met in Brussels with Iran’s Deputy Foreign Minister for Political Affairs, Abbas Araghchi.

Senator Dick Durbin of Illinois, the number-two Democrat in the Senate, branded the US withdrawal from the Iran nuclear deal “a mistake of historic proportions”.

He said that breaking the Iran deal increases the danger that Iran will restart its nuclear weapons programme, which threatens Israel and “destabilises the entire Middle East”.

Mr Durbin said Mr Trump’s action “isolates the United States from the world at a time when we need our allies to come together to address nuclear threats elsewhere, particularly in Korea”.