Does Johnson want to be remembered as ‘Mr. No deal’? EU’s Tusk hopes not 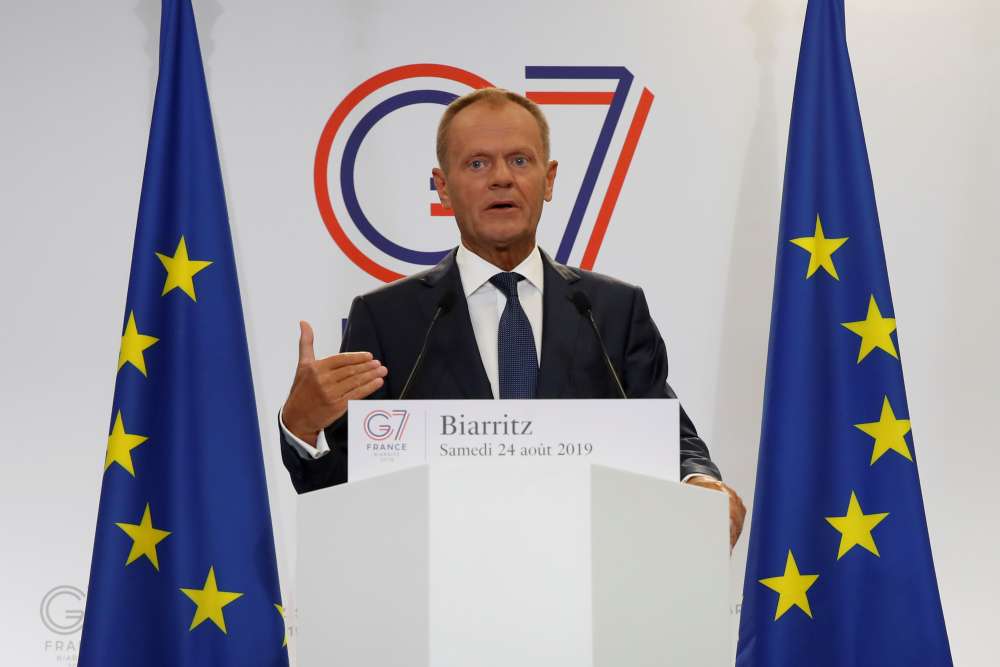 European Council President Donald Tusk said on Saturday he would not cooperate with Britain on an exit from the EU without a withdrawal agreement and said he hoped new prime minister Boris Johnson did not want to be remembered as “Mr. No Deal”.

Tusk told reporters in Biarritz that he would be willing to hear ideas from Johnson on how to avoid a no-deal Brexit when the two men meet on Sunday on the sidelines of a G7 summit in the French seaside resort.

“The one thing I will not cooperate on is no deal. And I still hope that PM Johnson will not like to go down in history as Mr. No Deal,” said Tusk, who leads the political direction of the 28-nation European Union.

“We are willing to listen to ideas that are operational, realistic, and acceptable to all Member States, including Ireland, if and when the UK government is ready to put them on the table,” he added.

Three years after the United Kingdom voted to leave the EU, the outcome of the tortuous Brexit crisis remains unclear, with options ranging from an acrimonious rupture on Oct. 31 to a smooth, amicable exit or even another referendum.

The bloc and its leaders have repeatedly refused to reopen a Withdrawal Agreement, which includes a protocol on an Irish border insurance policy that then-prime minister Theresa May agreed in November.

Johnson is hoping that the threat of a disorderly ‘no-deal’ exit will convince the EU to grant him the divorce deal he wants. However, on his first foreign trip as prime minister last week, the response from EU heavyweights Germany and France was firm: the Withdrawal Agreement will not be changed much.

Brexit is expected to come up at a meeting of the leaders of the European G7 nations – France, Germany, Italy and the United Kingdom – and Tusk later on Saturday.

Johnson’s key demand is that the EU remove the Irish border backstop, which would keep the United Kingdom in a customs union with the EU unless a better solution is found to keep open Ireland’s 500-km land border with the British province of Northern Ireland.

He has vowed to lead the United Kingdom out of the EU on Oct. 31 with or without a deal.