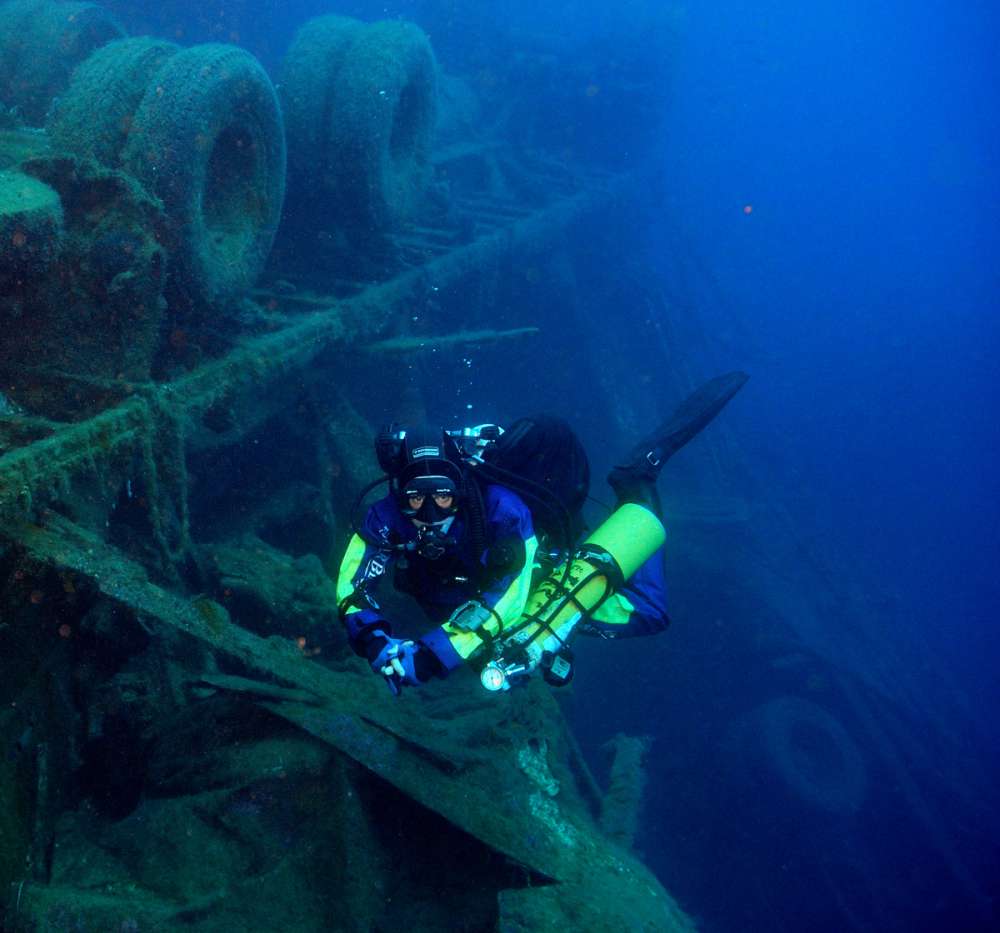 – Fraggle
The cargo barge sank complete with its load of heavy stone blocks.
Today, the blocks have been dispersed and litter the surrounding ocean floor – a welcome retreat for eels, moray eels and a variety of other fish.
The dive leads past the wreck, along a large scaffolding structure to a sunken helicopter.

– HMS Cricket diving site (A World War Two gunboat)
Open water (OW) qualification required. Access is by boat.
Situated off Larnaca, this dive is an opportunity to explore an old British battleship that rests upside down on the seabed at 27 metres.
The World War Two gunboat survived the war. It was then anchored in Larnaca Bay and used as target practice by the RAF but sank in 1947 due to bad weather.
There is a sandy dip under the wreck. Divers can swim inside the hull through escape hatches and underneath the wreck.
The vessel is also home to groupers and other fish. Visibility is some 25 metres. The maximum depth is 33 metres.

– Helicopter wreck diving site (a British army helicopter)
Open water qualification (OW) required. Access is by boat some 15 minutes offshore.
Situated off Larnaca, this dive is an opportunity to dive on a British Army Helicopter that sank to 16 metres below sea level in 1996.
The area is frequented by schools of fish and octopus. Average visibility is 25 metres and the average depth 16 metres.

– The Zenobia wreck diving site (Top World Dive Site)
Advanced open water (AOW) qualification required. Access is by boat.
Just 1.4 kilometres off the coast of Larnaca, this is rated one of the 10 best wreck dives in the world.
The Zenobia, a Swedish Ro-Ro 172 metre ferry carrying 108 articulated lorries, sank in 1980. It lies on its port side on a flat bed of sand and rocks.
Both the ferry and its cargo are still intact and fascinating to explore. The wreck is also home to schools of fish, including grouper, barracuda and tuna.
The dive starts at 17 metres and bottoms at 43 metres. Visibility is up to 50 metres and water temperatures a comfortable 16 to 28 °C.

– The Alexandria
The Alexandria wreck was once an old fishing boat and it now sits in 30 metres underwater close to Larnaca harbour.
The Alexandria wreck is actually located near to the world famous Zenobia wreck which means you can easily dive the two wrecks in one day or simply dive both wrecks on different days.
Although the Alexandria wreck lives in the shadow of its neighbour ‘The Zenobia’, it is still a wreck worth diving and one that you can tick off your list.