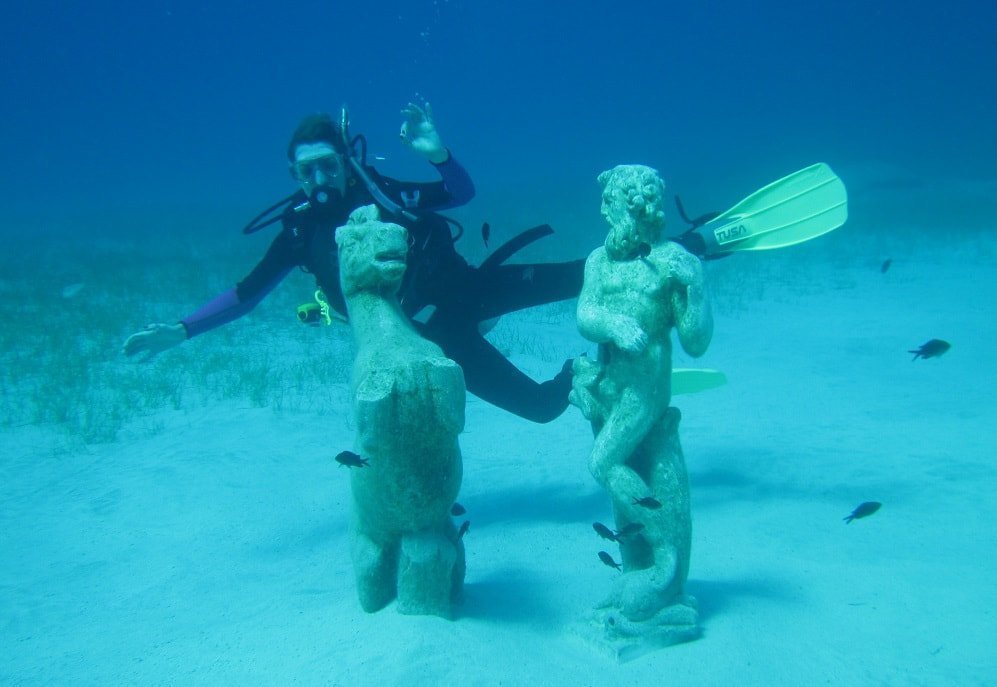 – Agioi Anargyroi diving site at Cape Greco
Open water (OW) qualification required. This is one of the most popular dives in the area with blowholes, tunnels and overhangs.
The site is situated some 10 minutes from Protaras on Cape Greco. Access is from the shore and the depth is 12 metres

– Green Bay diving site
Open water (OW) qualification required. Access to the water is by land.
There are fragments of ancient amphorae on the seabed 12 metres underwater to be explored. There is also a variety of fish and abundant opportunities for photography.
The depth is 12 metres and visibility is 45 metres.

– The Canyon diving site at Cape Greco
Advanced open water (AOW) qualification required. Situated at the south side of Cape Greco just under the cliffs, access is from the shore.
The dive has interesting rock formations and offers the opportunity to see stingrays and other fish. The water is crystal clear, with average visibility of 45 metres.
The average depth is 15 metres.

– The Caves diving site at Cape Greco
Open water (OW) qualification required. This is one of the most popular dives in the area with blowholes, tunnels and overhangs.
The site is situated some 10 minutes from Protaras on Cape Greco. Access is from the shore and the depth is 12 metres.

– Fishing vessel Nemesis III
The bottom trawler Nemesis III was built in France in 1956 and was previously named “Thalia”. It was brought to Cyprus in 1987 where it was registered under the Cyprus flag.
Soon after, it was licensed by the Department of Fisheries to operate in international waters. Nemesis III operated in the Eastern part of the Mediterranean Sea and in Libyan waters as well.
The vessel was then deployed in Protaras area, Paralimni Municipality at around 23 metres depth.