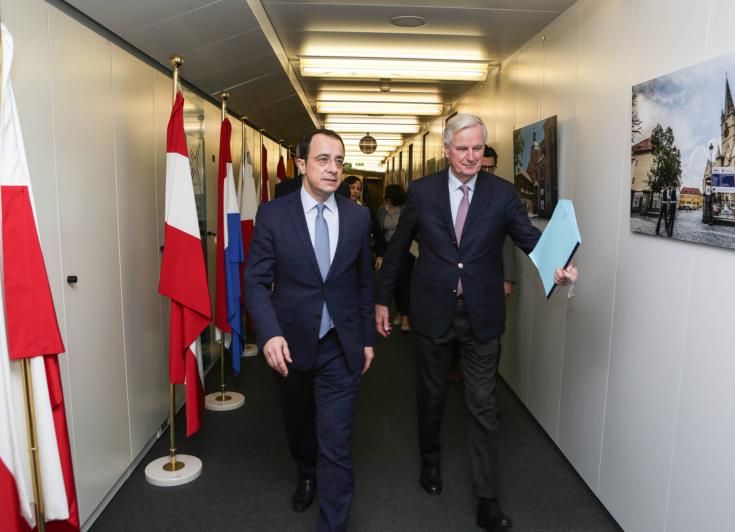 The risk of the UK`s disorderly exit from the EU is rising as the non-ratification of the Withdrawal Agreement (WA) continues, acknowledge EU Brexit Chief Negotiator Michel Barnier and the Foreign Minister of Cyprus Nikos Christodoulides, following a bilateral meeting this morning in Brussels, ahead of the EU Foreign Affairs Council, (FAC).

During the meeting, the Foreign Minister assured Michel Barnier of the importance Cyprus attaches to the `27` unity, and they agreed that the WA can not be renegotiated.

As noted, at the meeting, the Minister and the Chief Negotiator conducted a review of the current phase of the process and stressed the need the EU to continue efforts for an orderly UK withdrawal  through the already negotiated WA and exchanged views on emergency measures, designed at national and EU level, with particular emphasis on the issue of British Sovereign Bases in Cyprus.

The two officials focused in particular on the issue of the British Sovereign Bases and on the measures to be taken in the event of a nasty Brexit to fully safeguard the rights of Cypriots and other European citizens living and working in the Bases.

In addition, N. Christodoulides briefed Michel Barnier on the measures taken at national level and thanked him for the support of the Commission in this effort.

Finally, the Foreign Minister welcomed the visit of Deputy Secretary General of the Commission, Mrs Celine Gauer, to Cyprus on 5 March, during which she will be given the opportunity to examine more closely the emergency measures, especially in the areas where Cyprus is particularly affected.

By In Cyprus
Previous articleFacebook broke rules, should be regulated – UK lawmakers
Next articleMan wanted in connection with burglary (pictures)