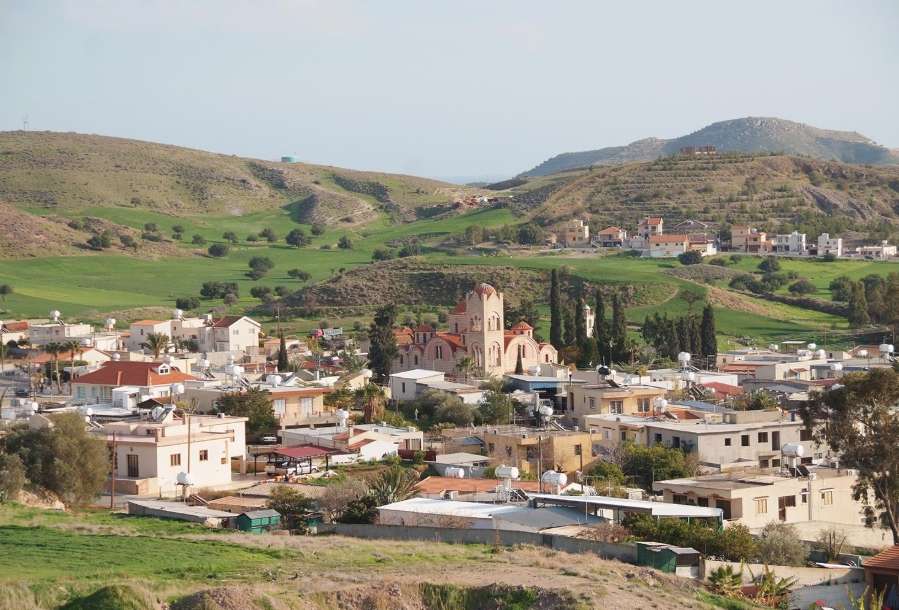 The village falls within the administrative borders of Larnaka and it is built on an altitude of 120 metres and at a distance of 15 km from the city of Larnaka. The community’s main topographical feature is that it is surrounded by hills shaped like domes (Troulloi) and this is where the naming of the village probably derived from. The highest hill is the hill named “Karavos”, which reaches and altitude of 256 metres and which is located west of the village.

The mine is located approximately 500 metres southeast of the village and it is the only mine of Cyprus which has been developed away from the foothills of Troodos. However, its copper deposit appears to be related to the pillow lavas of Troodos.

The conglomerate copper rust, as well as the underground mining work remains, reveal that the copper deposit was extensively exploited during the ancient years. This exploitation can be linked to the history of the ancient city of Kiti which, according to carbon-14 dating which took place in the city’s copper processing factories, begins in the 13th century B.C. The mine of Troulloi was definitely one of their suppliers, if not the most important of all suppliers.

The recent history of the mine begins back in around 1920, as is the case with all mines of Cyprus.

In parallel with copper, there were also gold deposits which were exploited by two other companies with which a contract was signed. Therefore, from 1935 to 1939, 46.9 kg of gold and 187,2 kg of silver were produced at the mine of Troulloi by W. Berdi, the company which had leased the mine. Moreover, the Greek Mining Company produced 67, 5 kg of gold and 368, 5 kg of silver at the mine of Kokkinomoutti located 3.5 km south of Troulloi. In fact, a factory was built east of the road linking Kellia with Troulloi in order to process the minerals.

From 1940 until 1952 no activity was recorded in the area. However, between 1952 and 1954, after research conducted by Berdi, a small copper deposit was traced below the gold deposit which they had previously exploited. Therefore, using the method of jet texturing 46,475 tonnes of copper were extracted from 1956 until 1961.

In 1962 the mine was leased to the Cyprus Mining Company and to American Metal Climax. The two companies merged under the naming Troulloi Mining Company. The new firm decided to construct a new factory which was completed in 1974. However, the mine’s operation ceased due to the Turkish invasion of 1974.

All in all, the operation of the mine benefited the community since several residents of the village found employment there. At the same time, early projects such as the supply of electricity and the asphalting of the road linking the community to Larnaka contributed to the growth of the community. 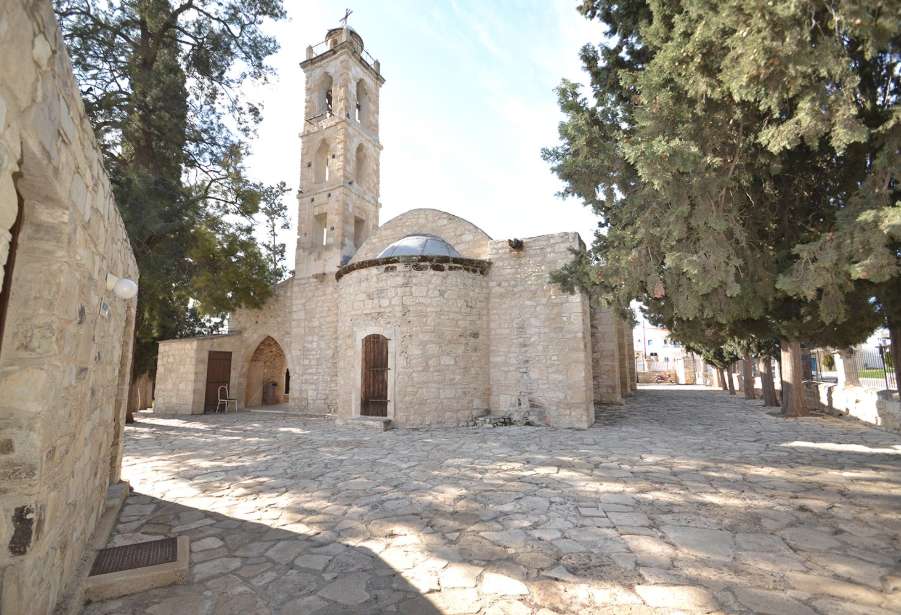 The residents of Troulloi, being loyal Orthodox Christians, honour the martyr and miracle maker Agios Mamas, to whom two churches located in the centre of the village are dedicated. The first and older one is a stony building dated back to the 16th century. It was restored a few years ago in a way which projected the church’s plain beauty. The second church, the newer and bigger one, is a building consisting of five domes which blends in with the entire morphology of the landscape. This church was sanctified on August 30th 1992.

Both churches add to the beauty of the community and prove the deep religiousness of the residents, as well as their love and respect for their protector Saint, the interventions of whom, according to testimonies, have been crucial in preserving the Christian identity of the village.

At the village there is one more church, a newly built one dedicated to the Three Hierarchs. This church is used by the old-calendarists of the village.

Apart from the above, a chapel is also located in the village. It is a stony chapel at the entrance of the village and it is dedicated to martyr Saint Agia Marina. In the enclosure of the chapel stands the bust of hero Andreas Souroucles, who fell during the liberating fight of 1955-59.

However, it is not only the churches of the village which prove the deep religious nature of the community residents. It is also the humble chapels located along the boundaries of the village. Located at a distance of 4km east of the village is a chapel dedicated to Agios Neophytos. Recently, after efforts made by the Community Council and the Ecclesiastical Committee paid off, the small chapel was restored in cooperation with the Antiquities Department and UNESCO. Today it stands imposingly in the wild nature. It is estimated that its partly ruined frescos are dated back to the 17th century.

Another chapel, located 2 km north of the village and which is now occupied by the Turks, is dedicated to Agios Leontios.

The Ecclesiastical Committee of the village, after making great efforts, has managed to build a new chapel which is dedicated to Panagia, “Rodon to Amaranto” and which is located 1500 m west of the village. It is a stony construction of splendid architecture which blends in perfectly with the surrounding environment. The construction works are expected to be completed soon so that the chapel can constitute one more place of worship for Christians, as well as a significant architectural structure which will adorn the area.

However, it is not only the churches and chapels of the village which boost the religious spirit of the residents, but also Father Antonios Constantinou, who is a distinguished clerical figure. He has been the priest of the Community since 1969. Father Antonios is a humble and enlightened person, a true shepherd who is respected and loved by everyone, not only in the society of Troulloi but in the wider region in general since his diverse actions have become known outside the boundaries not only of the community but of Cyprus as well. 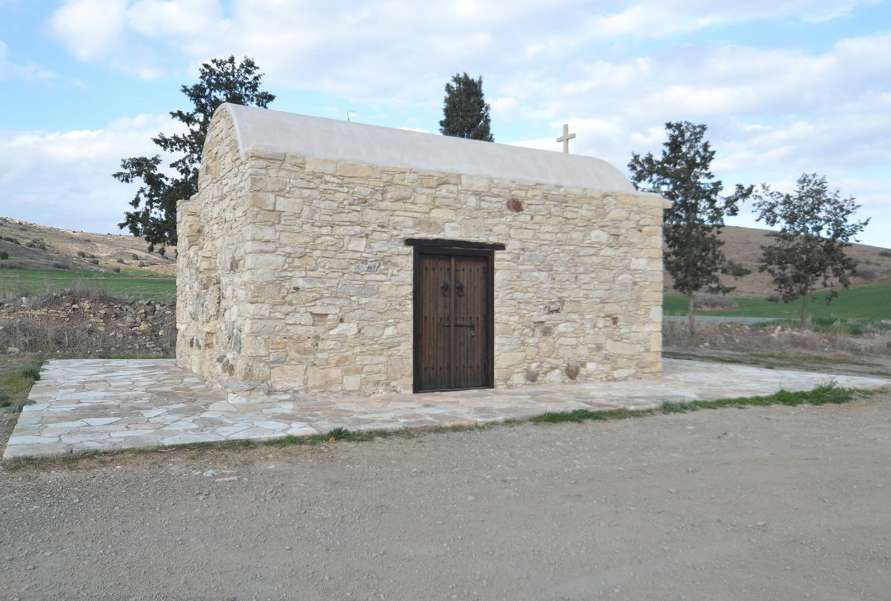 The Monastery of Agios Georgios of Mavrovounio 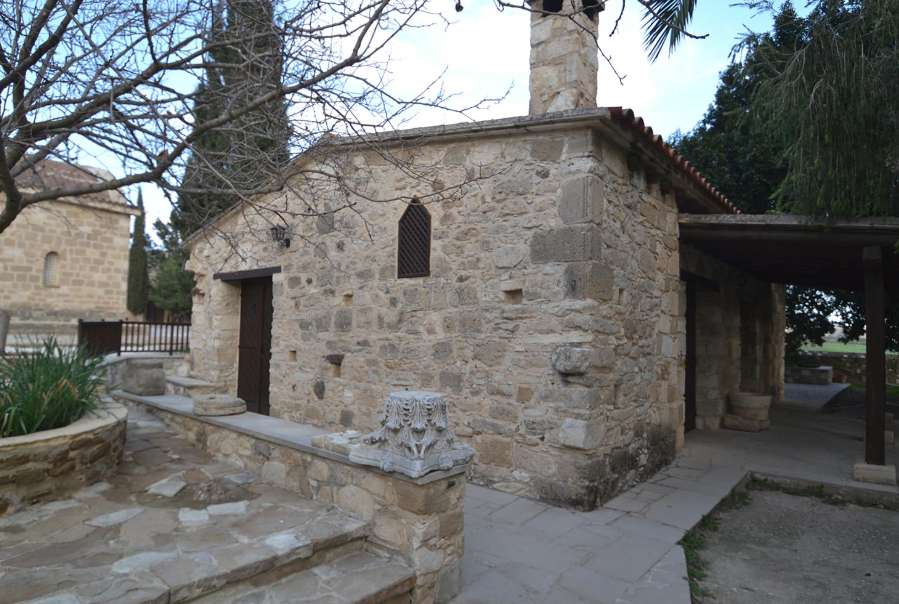 The Monastery is located approximately 2 km southeast of the village. Up until 1993, if one happened to pass by the area, all they could see was a chapel, which constituted the only part of the Monastery, which had existed in the area before, still standing. As far as the buildings of the monastery are concerned, very few ruins were still salvaged.

However, it is certain that there used to be a Monastery in the area, the history of which is unknown. Some place it during the Byzantine years and others during the post Byzantine times. Agios Neophytos Egkleistos or Secluded (1134) mentions the “Mavrovounia” and a Monastery dedicated to Agios Georgios. Professor Kyriakos Hadjiioannou writes in his folk literary work titled “Kypros”, which was produced in the beginning of the 20th century, that everything salvaged at that time proved the greatness of the Monastery.

In 1722 the Monastery was renovated and the church acquired its present form. In 1735 a Russian monk named Vasileios Barsky visited the Monastery and described the scenery with the bare hills, the spring water and the trees surrounding the Monastery, which mainly consisted of olive and berry trees. According to what he wrote, the monks bred goats and produced silk for a living. Regarding the church, he describes it as small but beautiful, with a stony floor.

According to a local tradition there used to be ovens outside the Monastery and that a big fair used to take place in the area. Another tradition supports that the monks bred chickens. In fact, they state that those chickens used to make so many eggs that the monks used corves to collect them. Moreover, it is said that when the women of Troulloi waited for chicks to hatch they would promise to give one to the Saint.

Based on various evidence salvaged it appears that the Monastery owned a significant amount of property and that the land was rented to the residents of Troulloi.

After the lootings and slaughters of 1821 the Monastery began to experience decay. In 1930 efforts were made to restore the chancel and the altar but they were unsuccessful.

During the E.O.K.A fight, possibly in 1957, British soldiers entered the chapel and ruined the chancel. The commissioners of the church of Agios Mamas of Troulloi went to the church and collected the pieces of the broken chancel and placed them on the wall. Then they transferred the icons to the village and stored them either at the chapel of Agia Marina or the church of Agios Mamas. After the Monastery began operating again, some of the icons and a candlestick were returned.

The Monastery premises are divided in two. The first includes an old church and a narthex which was added later, the monastery’s guesthouse, the office, the altar and the bookshop. The second part, which is accessible only to monks, includes the monks’ cells, the library and the guestrooms.

When the Monastery’s reconstruction works were completed, the large icon of Agios Georgios, which used to be kept in the church of Agios Mamas of Troulloi, was brought to the Monastery. Most of it has been ruined but based on what had been preserved the icon was restored.

During the Monastery’s reconstruction works the Community Council of Troulloi undertook some of the works, including the earth filling, the construction of retaining walls, the planting of trees and the supply of water. The minister of the Community, father Antonios Constantinou, arranged for the creation of a new iconostasis and new icons.

The first mass was held on April 14th 1996, on Easter Day and it was actually the Vespers of Love.

The fathers of the Monastery planted hundreds of trees, mainly olive and palm trees and as a result the Monastery now resembles an oasis.

Due to the several loyal Christians who visit the Monastery during the Vespers and masses, a new larger church is going to be built.

Other worshipping areas in the Monastery include the chapel of New Martyr Agios Georgios Kyprios and Agia Marina, the underground chapel of Saints Fathers of Optina and the Cave of Saint Maria the Egyptian. 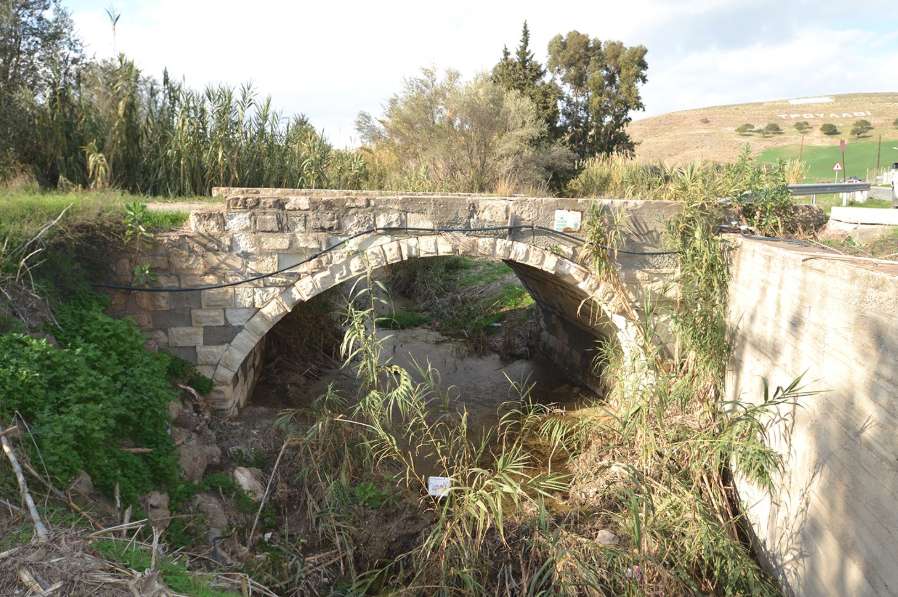 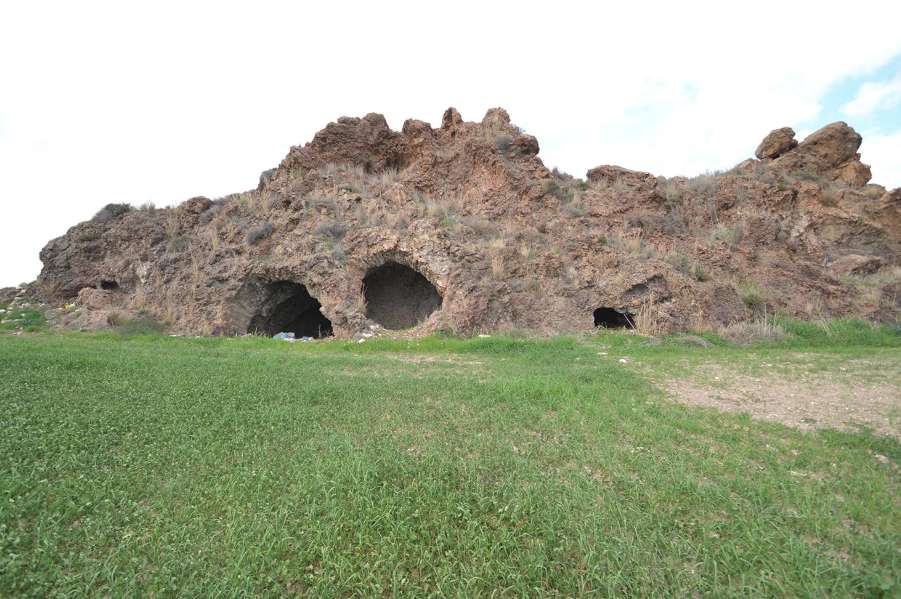 The cave of God Ifaistos