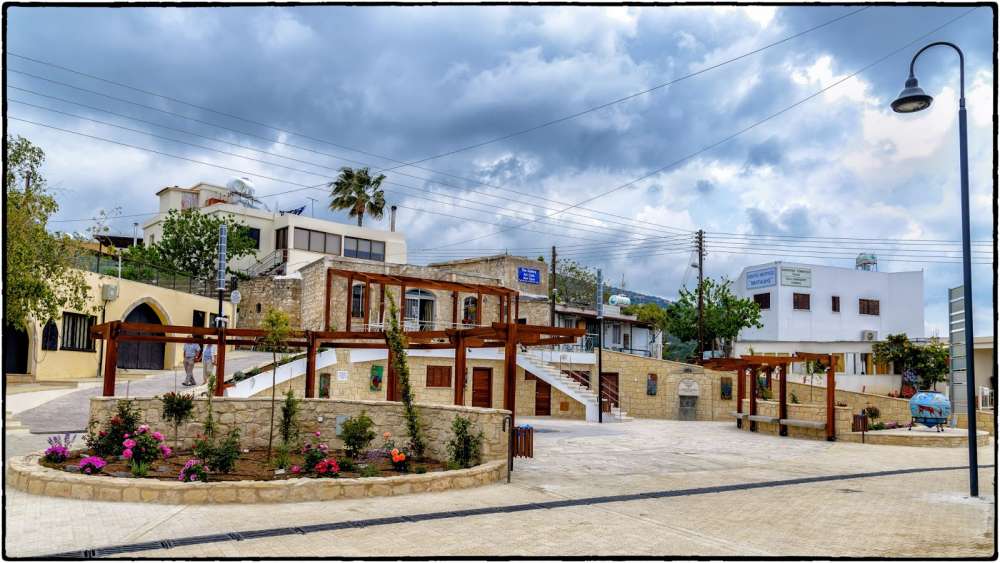 Tala is a large suburban village 6 km north of Paphos. Many non-Cypriots (mostly British) have moved here permanently or have a summer home in Tala. Agios Neophytos Monastery is 1 km north.
Tala is the ancestral village of the singer Cat Stevens. His father, Stavros Georgiou, was born here in 1900.

THE STORY OF AGIOS NEOFYTOS AND THE HOLY MONASTERY

At a distance of about one thousand meters from the community of Tala lies the monastery of Agios Neofytos.

The founder of the monastery, St. Neofytos, was born in Lefkara in 1134 from a poor and large family. At the age of 18 his parents got him engaged in spite of his wishes (in those days the marriage affairs were handled by the parents without asking the opinion of those that were about to be married).
So St. neophytes abandoned the village and secretly went to the monastery of St. John “the Chrysostom” of Koutsoventis to become a monk. Because the saint was illiterate, the Prior of the monastery assigned to him the cultivation of the monastery’s vines. There he first learns reading and writing and becomes an excellent vine-grower. At that time he asked the Prior to let him become a hermit but the Prior declined because of his young age. Then St. Neofytos went to Jerusalem for a pilgrimage to the Holy Land, hoping to find some old hermit who would guide him in an ascetic life. He returns to the monastery without achieving his purpose. He tries again to convince the Prior to allow him to live as a hermit but without any resul

At that time he decides to abandon the monastery and go to the mountain “Latros’ of Asia Minor. He goes to Pafos aiming to find a ship so as to leave. There, however, he gets arrested as a fugitive and is imprisoned. The guards steal the money that he had. With the help of pious people, he is released from prison and -without any money -he is forced to seek for a hermitage in the island’s inland.
So, he arrived to the cliff and the small natural cave where today his “Eglistra” (retreat) stands.
He began to carve out the small cave, removing the rocks, and by enlarging the cave he created the temple of the Retreat and a cell, in which he dug his grave.
In 1770 the Saint he receives his ordination as a priest and assumes a disciple. Ever since then the Retreat begins to grow in size and be beautified. Cells were carved across the entire length of the cliff.

The fame of the Saint began to spread everywhere and soon the number of visitors increased significantly. In 1197, in order to avoid the nuisance of the visitors, the Saint was forced to dig high up over the Retreat another cell, the New Zion as he called it, so as to avoid that nuisance. In order to be able to observe the Services and participate in the Eucharist, he dug a small cell over the temple of the Retreat, the Stoup, and connected it to the temple through a rectangular hole.

It is not known when Saint Neofytos died. He must have died after 1214, having first his nephew Isaiah appointed as his successor. It is generally accepted that the Saint was buried, according to his instructions, in the grave he had prepared himself, inside a wooden coffin made out of pine, cedar, and cypress wood that he himself constructed. His successor, Isaiah, following the instructions of the Saint, closed with a wall the opening that was created so that the coffin could be place in the grave and decorated the wall with frescos, making it indistinguishable. As a result, the exact burial place of the Saint was forgotten with the passage of the centuries.

St. Neofytos was voluminous. Despite the fact that he learned to read & write after his 18th year of age, he probably is the most voluminous middle-Byzantine writer. Apart from Sermons he also wrote Hermeneutics upon the Holy Bible and more, in which valuable information about Hagiology (on Saints) and the history of Cyprus. These writings of the Saint began being published by his Holy Monastery. Three multi-paged volumes have already been published.

It is considered as a fact that Isaiah, whom Saint Neofytos himself had appointed as his successor, succeeded him as a Prior of the Retreat. Nothing is known about Isaiah. Non of the Priors of the Monastery from the 13th, 14th, and 15th centuries is known. In any case, the Monastery continues to exist and flourish.
In 1570, the Turks that conquered Cyprus systematically pillaged it. In 1585, after an order by the Sultan, the monasteries were sold, the Monastery of Saint Neofytos included, and the monks were forced to scatter. The rebirth of the Monastery was achieved by the priest-mink Leontios who gathered monks and ordained himself as a Prior. In 1611 he asked Archbishop Christoforos to declare the Monastery as autocephalous (independent), something that the Archbishop did, having the consent of the then Metropolitan Bishop of Pafos, Leontios. In 1631 the Patriarch of Constantinople Cyrillus confirmed the independency of the Monastery.
The grave and the remains of St. Neofytos were found -most probably -in 1756. The remains were transferred to the Shrine of the Monastery.

THE MUSEUM OF THE MONASTERY

In order to preserve its treasures and also to make them accessible to the visitors, the Monastery has created a Museum, under its east wing, in which significant treasures are on display. The Museum is consisted of two departments. The purely ecclesiastical in which icons, holy items, manuscripts, and old documents and vestments are on display, sating back from the end of the 12th to the 19th century, and the non-ecclesiastical in which mainly pots of the Geometric and Archaic (900 – 600 BC) period of Cyprus.

The visitor descends to the Museum via a ladder built at the north end of the eastern wing. Here, icons of small proportions, mainly of the 19th century, are on display. Only one icon, one of the Enthroned Virgin Mary holding Christ upon her laps, is of large proportions. This icon dates back to 1884.

The lobby is separated from the 1st chamber by a large showcase, in which a wooden altar of 1864, Holy Chalices and Holy Trays of the 19th century, woodcut crosses and various other Holy items of the 18th and 19th century are on display.

In the 1st chamber some very important icons, dating back to 1183, are on display. There are icons of the 16th century.

In the 2nd chamber, two pairs of Bema Doors that date back to the end of the 18th century are displayed. There are also several icons of the 16th, 17th, 18th, and 19th century. In this chamber six censers, the oldest dating back to 1691 and the earliest to the 20th century, are exhibited. In the same chamber there are various Gospels with vermeil covers, manuscripts and old documents. The oldest document includes speeches of Saint Neofytos and dates back to the end of the 12th century. There is also a manuscript that dates back to the 16th century.

In the 3rd chamber there are icons, miniatures and a stole. Quite important is the “Panagia I Eglistriani” (Madonna of the Retreat) that dates back to the beginning of the 16th century.

In the 4th chamber there are icons of Saint Neofytos and the Great icon of the Assumption, as well as Priors’ staffs of the 18th and 18th century.
When exiting the chamber, the visitor enters the great hall in the west where the pots of the geometric and Archaic Period are exhibited and then exits through the built ladder at the north end of the Museum.

In the Stefanou region of the Tala village, there are trees with palm-like foliage that their height does not surpass 10 metres. They are known under the name “Kapnismata” (meaning “smokes”, “incenses”). They are the only trees of this kind that exist in Cyprus and in the Middle East.

It is not known how these trees were found in the region but tradition reports that St. Neofytos brought them with him when returning from the Holy Land.

For the strange name of these trees, the logical explanation can be traced in the fact that the bark of this tree secretes a type of tar that is used in the church instead of frankincense for incensing.

Many times people have tried to plant out these trees to other regions but these efforts failed. So, “Kapnismata” (amber trees, Liquidambar Styraciflua) are the only ones of their kind and can be found -for some centuries now -only in the region of Tala.

At the village you will see an old Watermill and you can spend some time with your children at the parks. 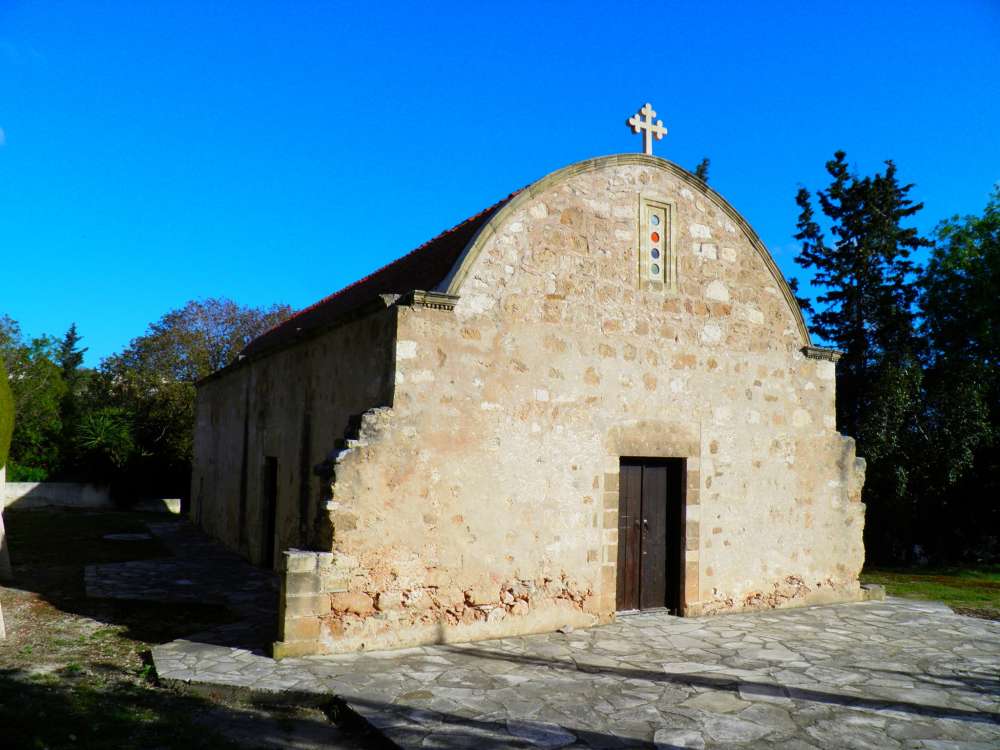 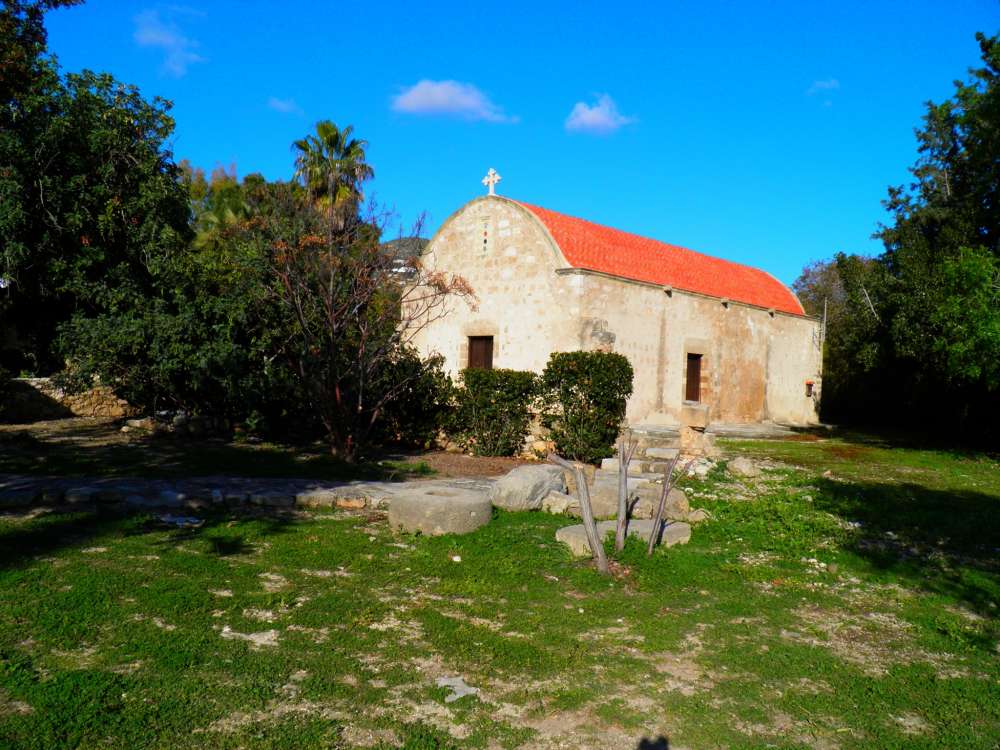 Courtesy of the Community Council of Tala