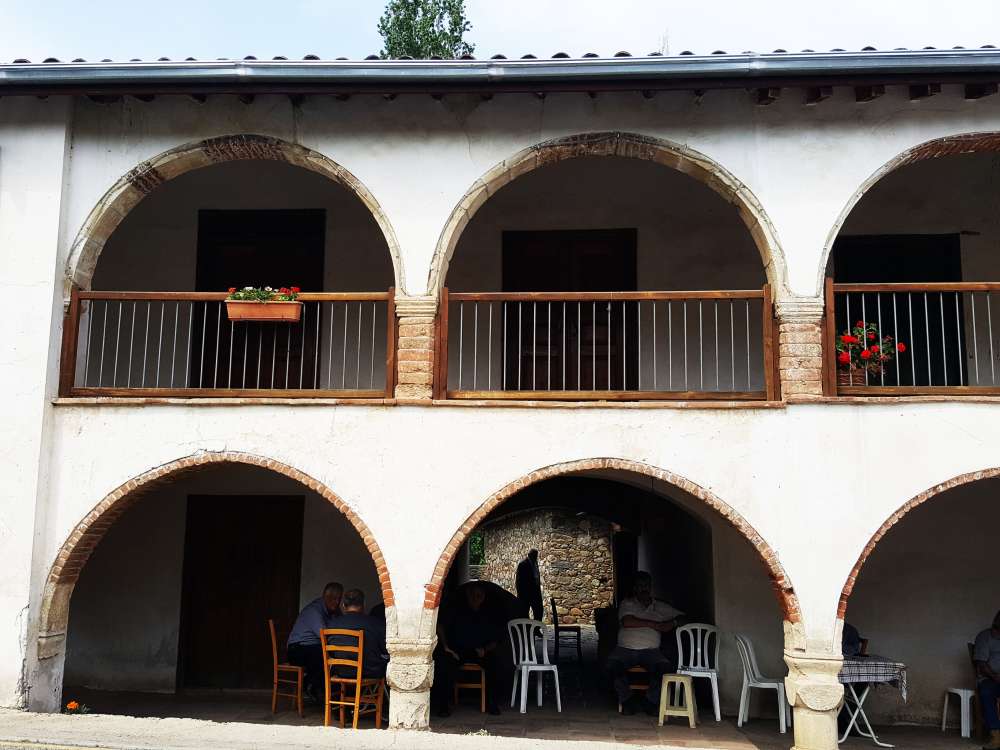 Kaliana is a village in the district of Nicosia, located in the south-west of the capital and it stands at a distance of 60,5 kilometers. It is situated in the geographical region of Solia.

The village is built in the valley of river Karkotis and it stands at an average altitude of 600 meters. The scenery is divided by the river; the south and west part of the community is mountainous and the altitude reaches 1.000 meters.

The first settlement of Kaliana was, according to historians, situated in an area named Agia Marina. However, the village was often invaded by pirates and thieves form Turkey and some of the inhabitants had to move to the south, towards Pano Chorio so as to save their lives and crops. During their passage through wild footpaths, they built wooden huts, also known as kaliana, and they stayed there (Annetis, Kasialos and Hadjitsaggaris are named as the first inhabitants). This is a possible explanation regarding the name of the village, and this is the one Nearchos Klerides also gives. There are the remains of a church found in this first settlement, that indicate the existence of life.

There are numerous versions in reference to the way the village got its name. one of them mentions that a long time ago, a very kind (kali) woman named Anna used to live there, and maybe kali Anna is the reason why the village is called Kaliana. A similar version has a woman living there, who was named Anna and had a lot of beauties (kalli). Therefore, Kalliana is the name for the village Anna with beauties (kalli) lived.

The village of Kaliana receives an annual rainfall of about 500 millimeters. Fruit-bearing trees (mainly apple, pear, peach and apricot trees) and olive trees are cultivated in its area. However, there is a great amount of uncultivated land.

Part of the Troodos Forest falls within the administrative limits of the village, and the high levels of rainfall that the forest receives have allowed the development of a rich natural plantation in the area that consists of pine trees and different plants known as tremithies, mazies, ksistarkes and konizous.

The village of Kaliana is situated close to the old Nicosia-Troodos roadway and to the new one, which connects the capital with the mountainous resorts of Troodos.

The mine of Skouriotissa, which is located north of the settlement, had helped the employment of its inhabitants before the Turkish invasion in 1974.

The village of Kaliana, even though it is not mentioned by medieval annalists, existed with the same name since the Frank domination era. It is marked in medieval maps under the name Calina.

An important monument of the village is its church, dedicated to Saint Anna (as well as to Saint Joachim). The church has been changed and altered through the years (12th century-16th or 17th century), but numerous murals are saved. These changes indicate the existence of the settlement during all these centuries.

A number of escutcheons (15th century) are painted in the internal part of the church. This designates that the settlement, the church and the region were considered as feuds.
Another old church of the village is dedicated to Panagia Iamatiki (Healing Mary).

After the island was occupied by the Turks (1570/71), the village of Kaliana was one of the six villages, whose tax were taken by the chief secretary or defterdaris, namely one of the four agas of Nicosia (the rest of these villages were Anogyra, Ghalata, Petra and the two Peristerones of Famagusta and Morphou).

The famous Station of Kaliana was located near the old Nicosia-Troodos roadway. This station was the resting point for travelers in older times, when traveling was difficult and tiring. The station was initially an inn and after that a traditional coffee-shop and diner. It was a double-storey building with arches, a fine specimen of Cypriot architecture that was next to the river and its small bridge.

This building still exists but not as a station. It is considered to be more than 100 years old, and is a listed building.

For some time, the village was referred to as Pano Kaliana so as to distinguish it from the Station for it was called Kaliana. This, however, did not carry on.

The village of Kaliana keeps, to a great deal, the fine elements of Cypriot popular semi-mountainous architecture. It is also known for its zivania that is still produced in the traditional way of distillation.