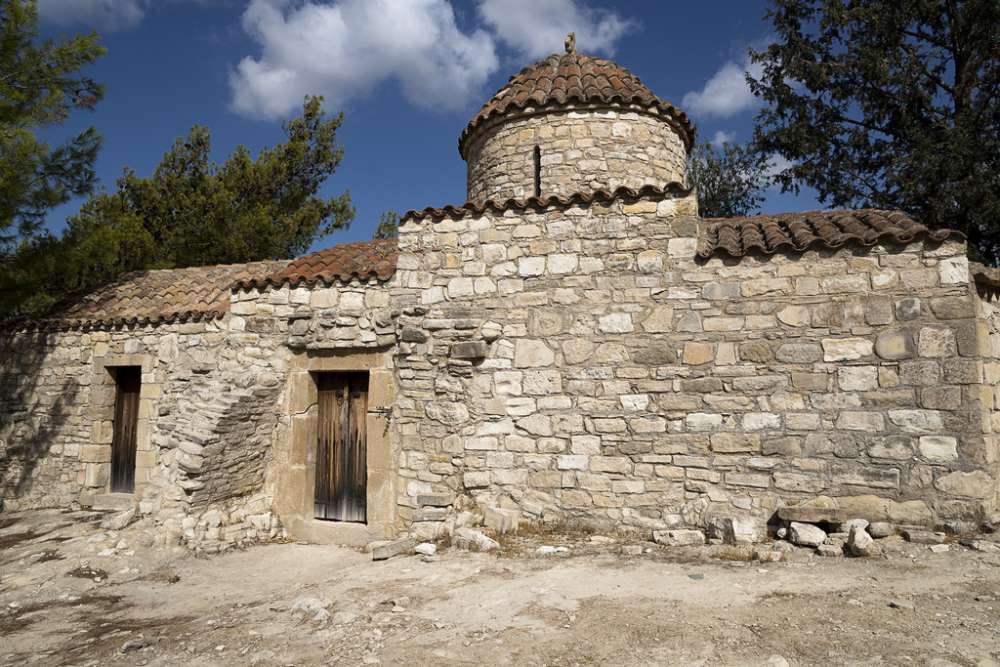 This Church was built in the 13thcentury with the coming of the Frangous and was the personal belonging of the land owner of Choulou at that time. The interior and its roof from the bell tower and back are covered with murals of icons depicting scenes from the Old and New Testament of the Holy.

Scriptures. The icon of Pantanassa is kept in the shrine and is a masterpiece from the 14thcentury. The murals of Pantanassa are in the loft area and are from the 13-14th represents the tragic story of Arodafnousas with her two children along with the Queen Eleonora. The Epitaph here is one of the most anciently preserved of its kind, it is woven with pure silk.

This small Church was built in the Byzantium style in the 12thcentury A.D. and served the needs of the settlers of that era. It is still in excellent condition with many inner murals saved from this time. This Church still holds a service every Easter Monday.

This small church is found on a mountain boasting beautiful views of the village, which begins at the foot of said mountain. At the time of Frangous there was an army watch guard in the area, and on this mountain slope there was small cave in which the soldiers of the guard would take shelter. This small Church was renovated in 1970 and has a service every Easter Friday. The lower part of the murals century.

This small Church is situated about one and a half kilometre northeast of the main village area. It was built in the rocky hills and is surrounded by wild vegetation and olive trees. The area is named the “plain region of Shali”. The church holds a service every Easter Wednesday.

This small church is found in the north west of the village; it was built by the Latinos and is situatedbeyond the Turkish Cypriot borders. Up until 1960 this small Church was without a roof, but was renovated after the 60’s. It holds a service on Easter Saturday.

Found within the community, this Byzantium style Church was built in the 8-9th Church was used by the Orthodox Christians during the Frangous period. The interior walls were covered with murals. Unfortunately, at the time of the Ottoman rule, the roof collapsed and was never reconstructed. Many murals were however saved and are to this day kept at the Holy bishopric of Paphos.