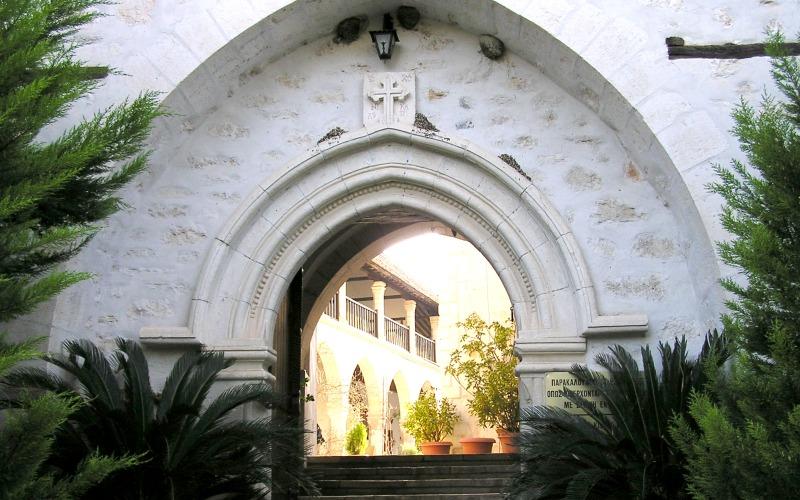 Monasticism and by extension asceticism are inextricaly linked to Orthodoxy. The fact that Cyprus  neigbours Egypt and Palestine where asceticism grew resulted in the island also becoming an important place for hermits.
Since this route is very long, it is divided into five different sections in order to cover the entire island.
In the years of iconoclasm, monasticism grew in Cyprus especially mainly due to the fact that the inhabitants kept their faith and offered refuge to prosecuted monks from Constantinople as well as other parts of the Byzantine Empire. The Monastery of Ayios Nikolaos, the Monastery of the Priests and many other sites are associated with this era. Later in the 11th and 12th centuries, when the Byzantine Empire was attacked by the Ottomans as well as the Crusaders, a number of monasteries were established in Cyprus. These grew in number under Frankish as well as Venetian rules (Μonastery of Panayia Podithou, etc).
Monuments: Monastery of Archangelos Michael, Analiontas – Monastery of Ayios Erakleidios, Politiko – Monastery of Machairas, Lazania – Ayia Thekla, Mosfiloti – Monastery of Timios Stavros, Stavrovouni.

Starting from Nicosia head to Kato Deftera to visit the hermitage of Panayia tis Chrysospiliotissas.  Then head to the village of Pera Chorio, the Church of Ayion Apostolon.
This route is the shortest without this meaning that it is of less significance. In Dali, the Church of Ayios Dimitrianos has magnificent frescoes of 1317 AD. In Ayios Sozomenos, apart from a church built under Ottoman rule, there is another one which is, however, unfinished of Franco-Byzantine style dedicated to Ayios Mamas.

The Limassol area is very significant with regard to the history of the Byzantium and of its art although special reference should also be made to its links with monasticism. Today, only 12 monasteries survive in the district, nine of which are inhabited by monks or nuns.
Near Akrotiri lies the oldest monastery of the district which is dedicated to Ayios Nikolaos although it is better known as “Monastiri ton Gaton” (Monastery of the Cats). It is estimated that the monastery was established in the 4th century by Ayia Eleni, who is also associated with the establishment of many other monasteries such as Timios Stavros in Omodos, where a piece of rope — with which Jesus Christ was tied on the cross  — is kept. The Monastery in Omodos has some of the best wood-carved ceilings. Although deserted, the monastery in Anogyra is old Christian.

Route 5
Total route length: 100 kilometres
Starts: Μonastery- Egkleistra of Ayios Neophytos, Τala
Ends: Hermitage of Ayion Pateron, Pano Archimandrita
This route crosses the district of Paphos which has many monasteries and hermitages such as the Egkleistra (enclosure carved out of the mountain) of Ayios Neophytos.
In the Egkleistra of Ayios Neophytos, built next to the hermitage of Ayios Neophytos, who was a Cypriot hermit, there are some magnificent 12th century frescoes, some of which are the work of Theodoros Apsevdis, a Constantinopolitan painter. Near Panayia lies another big monastery of Paphos, Panayia Chrysorogiatissa, with some very well preserved buildings dating back to Ottoman rule. In Moni, there is also an ecclesiastical museum which houses treasures of the monastery. Heading south, the visitor will come across the Monastery of Ayios Nikolaos, which is also known as the Holy Monastery or the Monastery of the Holy (“Ton Iereon”) built in the 10th century. Tradition has it that Ayios Nikolaos set off from this monastery. In Kouklia, there are two hermitages one of which is also called old “Egkleistra” of Ayios Neophytos.Μonuments: Μonastery – Egkleistra of Ayios Neoophytos, Τala – Μonastery of Panayia Chrysorogiatissa, Panayia – Monastery of Ayios Nikolaos, Statos – “Old Egkleistra” Hermitage, Κouklia and Hermitage of Ayion Pateron, Pano Archimandrita.
By In Cyprus
Previous articleOyster (pleurotus ostreatus) mushrooms with Roquefort and hiromeri ham
Next articlePelendri Village