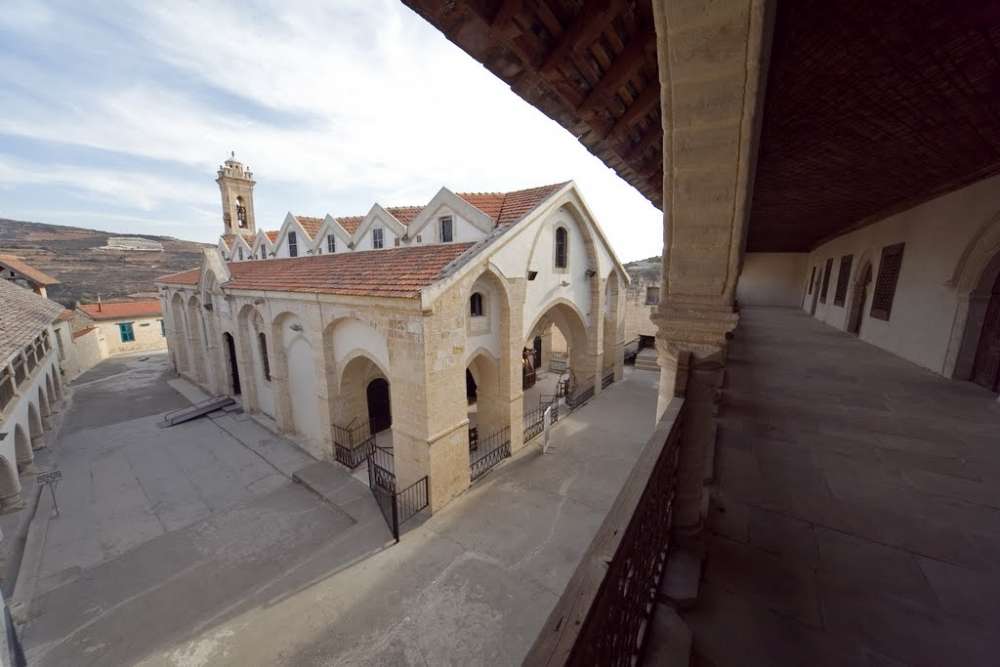 According to tradition, one night the inhabitants of the neighbouring villages Pano (Upper) and Kato (Lower) Koupetra, which do not exist today, observed a fire in some bushes at the area where the monastery stands today. When it dawned they went to the spot where the fire was seen but there was no sign. This phenomenon repeated for several nights. So they started to dig the earth, discovering a small cave in which they found the Cross. In order to thank the Lord, they constructed a chapel over the cave and kept their precious treasure there, which became a sacred place of adoration for them. With the passage of time the chapel expanded and was converted into a Monastery with many monks and a vast fortune -not only in Cyprus but also abroad – maintaining a grange (monastery dependency) in Constantinople (Istanbul) and real estate in Russia.

According to tradition, the Monastery was established before St. Helen’s arrival in Cyprus in 327 AD. The exact date of establishment is unknown. Perhaps it existed before the village and Omodos was later established around the monastery. Various historians of Cyprus such as Neofytos Rodinos, the Russian monk and traveller Barsky, the Dean Kyprianos and others, refer to St. Helen’s visit to Cyprus and to the fact that she left a part of the Holy Rope and the Holy Rood in the Monastery. This rope, with which the Romans bound Christ to the Cross, is described as red coloured and “stained by the blood of Christ”.

After several miracles by the Cross, the Monastery gained substantial reputation and evolved to a great place of adoration. The historical Monastery of Omodos has gone through various phases as the aeons went by. During the harsh centuries of Turkish domination, the Monastery managed to sustain itself and achieve great things. Around 1700 it secured a sultan’s “firman” (decree) of impunity and immunity. In 1757 water was transferred to the monastery and the cistern and fountain, found in the south-west end of the monastery, were built by the priest-monk Germanos. In 1917 the entire property of the monastery was given to Omodos’s inhabitants. A few years later it was deprived of its last monks and was converted to a parish.

The Bishop of Pafos, Chrysanthos, did a full renovation of the Monastery in the second decade of the 19th century, in collaboration with the Steward of the Monastery, Dositheos, who served as a church Steward from 1810 until 1821. In 1816, according to the sign found over the entrance of the monastery’s Synodicon, the west wing and the west part of the north wing were constructed. The height of the rooms and the arches of the two-level gallery is greater than that of the north wing. The west wing is the most important one. According to the sign, the reconstruction was done “through the charitableness of the pious and very laborious Stewart Dositheos “. In 1817 the -inlaid with gold -icon screen of the church was made. The great Synodicon and the other halls and corridors of the Monastery were decorated with woodcut items that are splendid woodcraft examples of the Rococo style. Especially interesting is the window of the Synodicon’s entrance that is found in the ceiling, in the north end of the west wing. Both the line of arches’ parapets and the windows are made out of small bits of wood, adjusted in such a manner so as to form elaborate gratings. The leafs also are made out of small pieces of wood with chisels so as to leave the impression of elaborate relief.
However, the most important specimen of woodcraft is the ceiling of the synodicon, the -so called -Throne of the Cross, which covers the eastern wall of the synodicon. These fretwork items are the most important ones that are extant in Cyprus. The bell that is preserved until today is a gift by Dositheos from 1812 and is the first bell that rang in Cyprus during the years of Turkish enslavement. The aid, however, that the Monastery offered to the “Filiki Heteria” (Society of Friends) for the Great Greek Uprising of 1821 proved fatal for the Monastery and for Dositheos. The Turks decapitated the Steward Dositheos, along with other clergymen and laymen, on the 10th of July 1821 in Nicosia.

In 1850 a renovation of the Church, which expanded on its two sides taking its present form, took place.

The Monastery’s architecture is characteristic. It is a huge, two-levels complex in the shape of (the Greek letter) Π that encircles the church in the north, west, and south with its tall cells and the vaulted arches.

One can enter the yard through a vaulted entrance, the so-called “kamaroporta” (arched door), which is found in the north side. Tradition reports that the arched door, which resembles that of a fortress, with its heavy, double crossbars, would not open when Turks who intended to harm the monastery would arrive. The west entrance that today exists in the part of the plaza was opened recently.

The complex is consisted of many stone-made cells, cellars, and hostels/hospices. The lace-like balusters under the arches of the roofed verandas, in the interior side of the constructions, have a very picturesque quality.

In the fenced yard a marble-made fountain refreshes the visitors. Upon a plate, dating back to 1763, the words “come to me you that are thirsty, like Siloam the fountain I will also quench your thirst” are inscribed. The large temple with three aisles of the Monastery, which is of the Basilica type, is built -according to local tradition -precisely above the cave where the holy Cross was found.

Note-worthy elements of the Monastery

The golden & chiseled icon screen of the Church, created in 1817, with the case of the Holy Cross and the ancient icons of Russian style, is of great importance.

A special work of art are the wooden ceilings, which decorate the corridors and the halls of the Monastery. They are amazing specimens of -Rococo style -woodcraft, made with admirable artistry out of thousands of very small pieces of wood that are harmonically matched.

Even more remarkable is the Synodicon with its wonderful ceiling and the throne of the Holy Cross, which is chiseled upon walnut wood and come into view as a true masterpiece. With the two-headed eagle towering above, the throne also serves as a crypt for the Holy Cross. Even the four couches that are preserved, made out of woodcut walnut, present a special beauty.

Today the hall of the Synodicon is an ancient monument. The other halls today house the Museum of Byzantine icons, the Museum of Folkloric Art, the picture gallery, a photo exhibition with old and new photos, and the 1955-1959 Struggle Museum -the first one to be made after the Epic Struggle. In it are kept many materials, personal items, uniforms, documents, and photographs of the fighters.

There are invaluable relics in the Monastery of the Holy Cross that have made it reputable throughout the world. Some of them are:

• The Great Cross with the Holy Rope. It is a wooden Cross with a gold & silver-plated cover, placed in a special canopy at the icon screen of the temple. Its surface is decorated by various depictions from the life of Christ. In the four ends of the Cross are the four Evangelists. At the centre of the Cross, within an area sheltered by a golden wicket that opens and closes, the “AGIOS CANNAVOS” (Holy Hemp-made Rope), which is also called “AGIO SCHINIO” (Holy Rope). It is a piece from the rope that the Romans used to fasten Christ upon the Cross and it is the only extant one in the world.
• A second Cross that -according to Costas Nicolaides -in it “is the little Cross enclosed”, which is the one originally found inside the cave.
• The Cross of the “Panaretos” (the all virtuous one). This is the old Cross of Anogyra. This Cross is very old and was kept in the mediaeval monastery of the Holy Cross outside the village Anogyra. During troublesome times the Cross was transferred to the Monastery of the Holy Cross in Omodos, where it is still kept until today, for safekeeping.
• The skull of Apostle Philip is kept in a gold and silver-plated case that is shaped like a pyramid. The authenticity of the skull is witnessed by the seals of the Byzantine Emperors Theodosius the Great and Heraclius. The Holy Relic of Orthodoxy was kept in Constantinople until July 31st, 1204. After the city’s capture by the Franks it was transferred for safekeeping to the village Arsinoe of the Pafos district. A little after 1735 the case was stolen and in 1770 it was replaced by the one that is extant until today, at the expenditure of the -then -Metropolitan Bishop of Pafos, Panaretos. For greater safety the case with the Apostle’s skull was transferred to the Holy Temple of the Holy Cross in Omodos before 1788.
• Wooden Cross with a height of 15 centimetres and decorated with precious stones. The excellent joinery artistry that it presents causes admiration.
• Fragment of a stone from the horrid Golgotha (Calvary) that was secured after an initiative of church steward Kallistrates Papademas.
• Many other items including holy vessels, remains of 26 Saints, precious jewels and other offerings.

By In Cyprus
Previous articleAgios Panteleimon Convent
Next articleMachairas Monastery