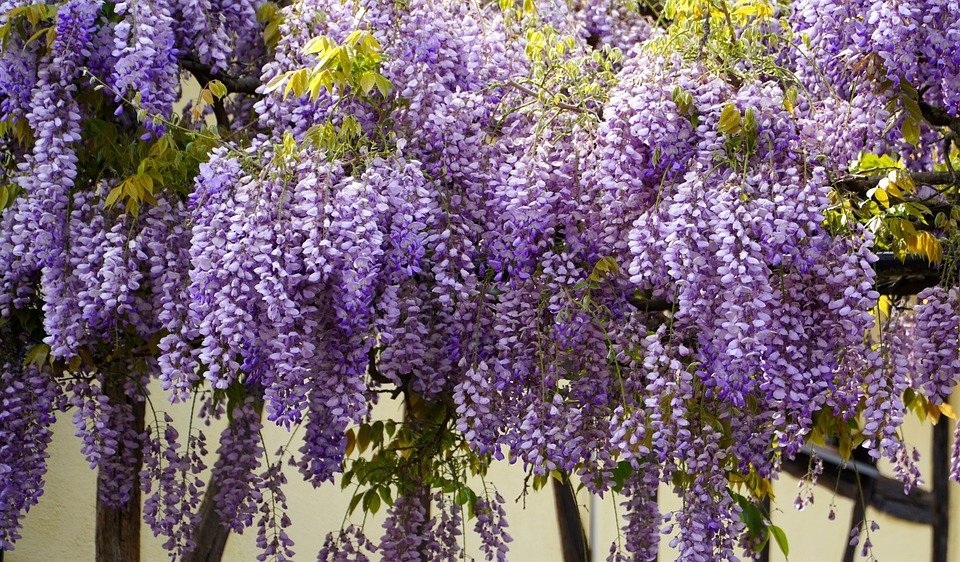 Wisteria is a genus of flowering plants in the legume family, Fabaceae (Leguminosae), that includes ten species of woody climbing bines (twining vines) that are native to China, Korea, Japan, Mediterranean countries and the Eastern United States. 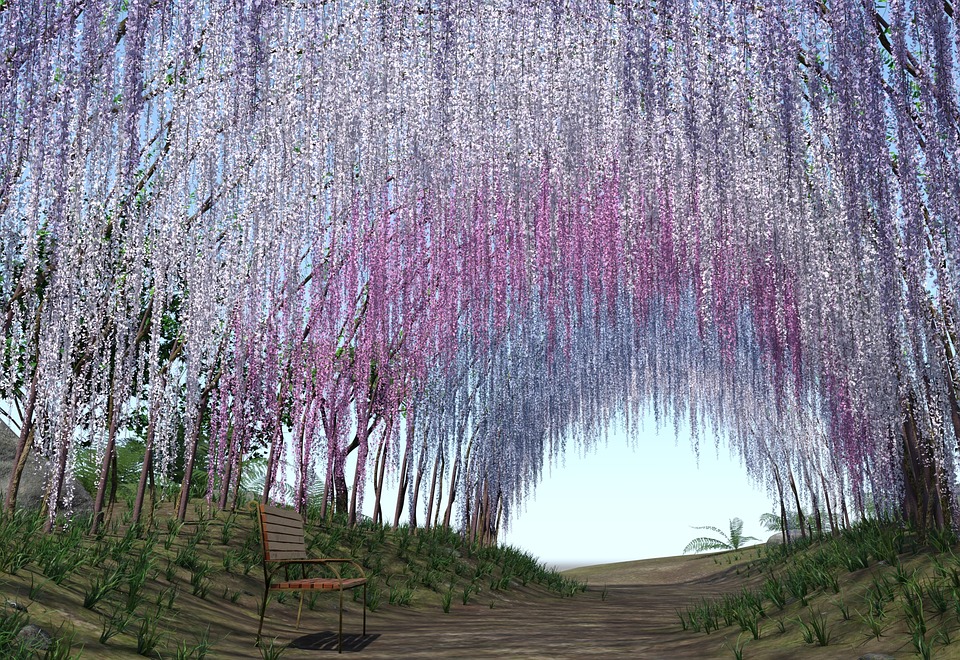 Some species are popular ornamental plants. An aquatic flowering plant with the common name wisteria or ‘water wisteria’ is in fact Hygrophila difformis, in the family Acanthaceae. 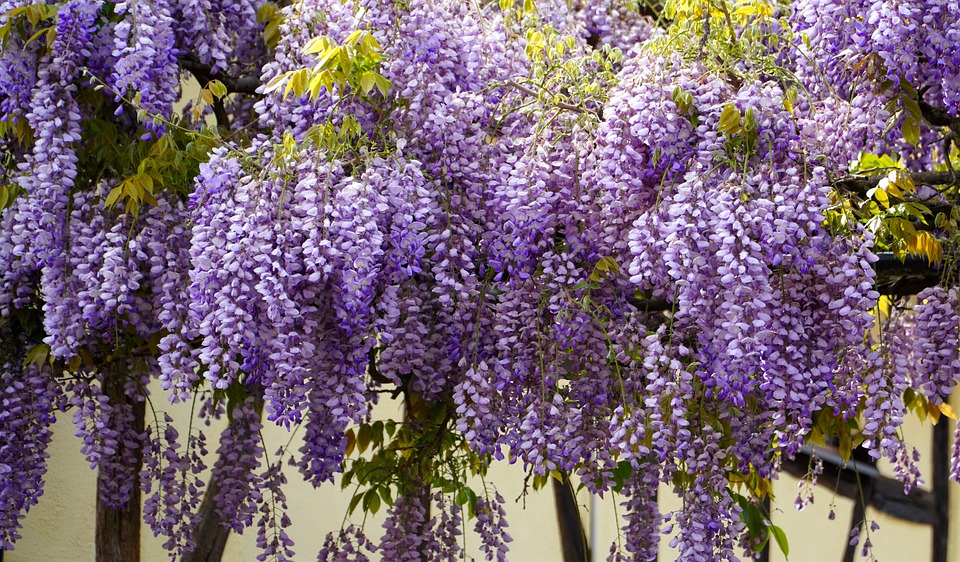 Wisterias climb by twining their stems around any available support. W. floribunda (Japanese wisteria) twines clockwise when viewed from above, while W. sinensis twines counterclockwise. 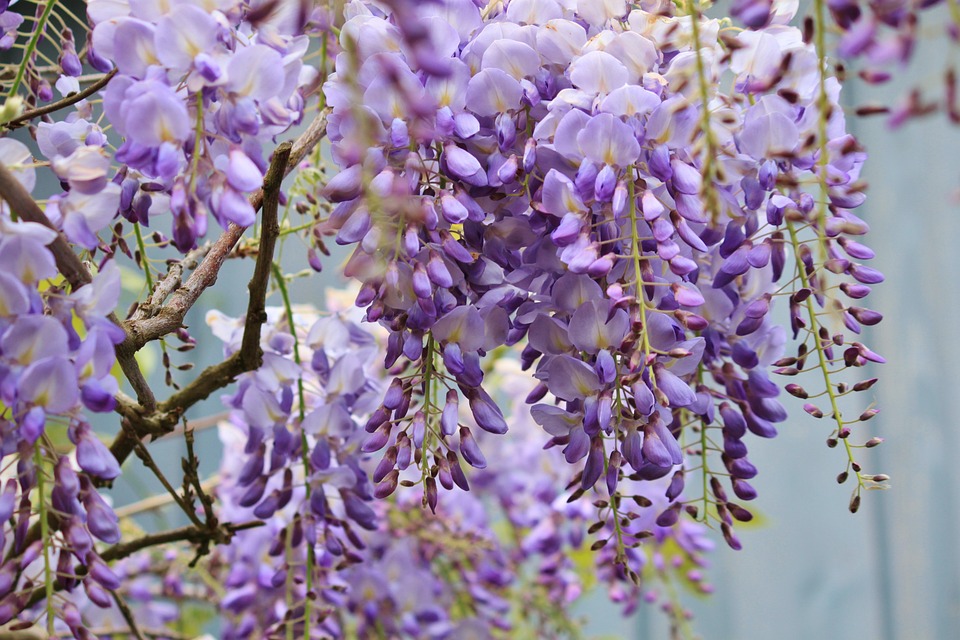 This is an aid in identifying the two most common species of wisteria. They can climb as high as 20 m above the ground and spread out 10 m laterally. 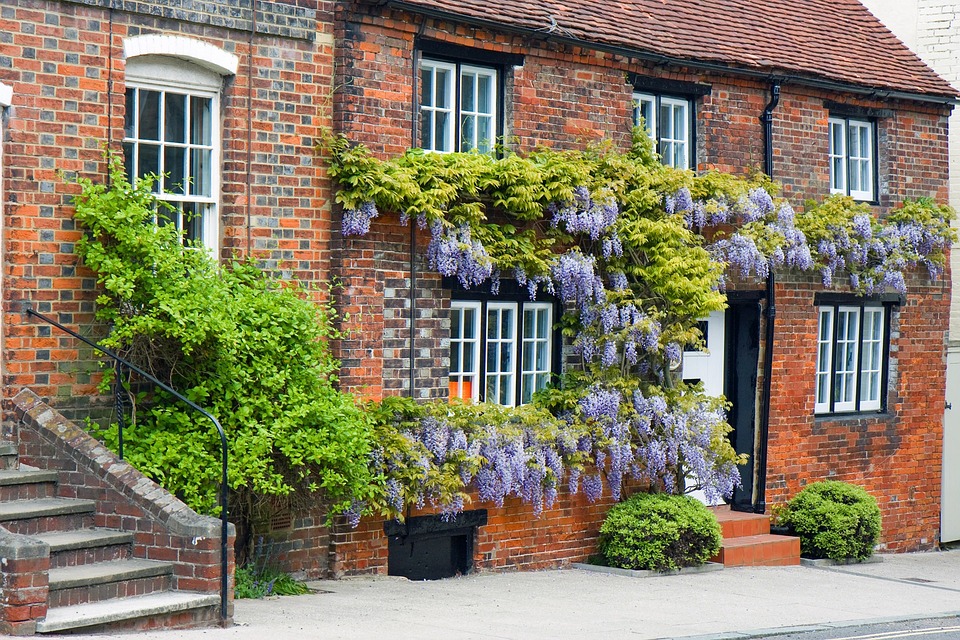 The world’s largest known wisteria is in Sierra Madre, California, measuring more than 1 acre (0.40 ha) in size and weighing 250 tons. Planted in 1894, it is of the ‘Chinese lavender’ variety. 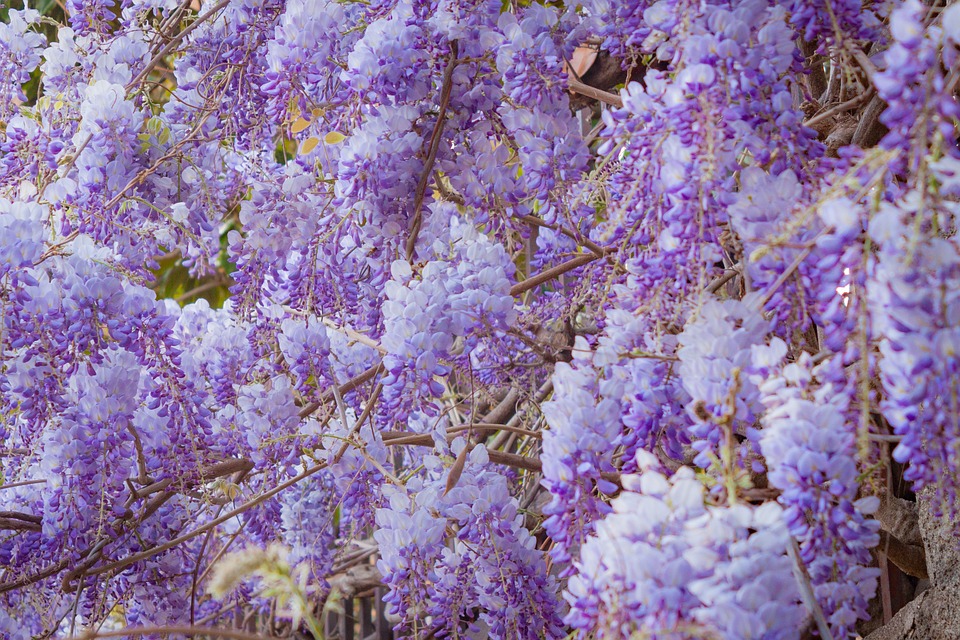 The leaves are alternate, 15 to 35 cm long, pinnate, with 9 to 19 leaflets. The flowers are produced in pendulous racemes 10 to 80 cm long, similar to those of the genus Laburnum, but are purple, violet, pink or white. 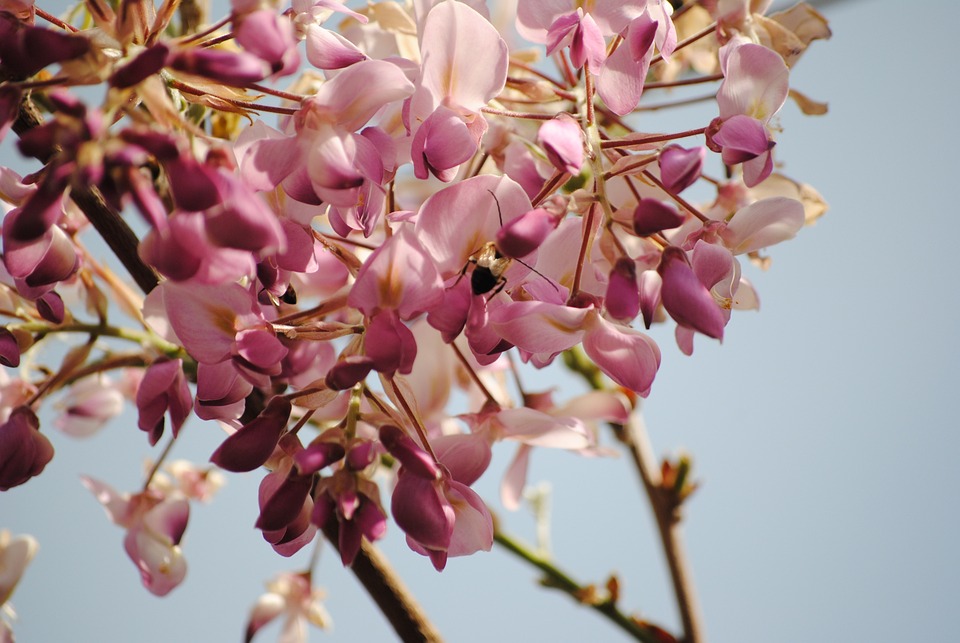 There is no yellow on the leaves. Flowering is in spring (just before or as the leaves open) in some Asian species, and in mid to late summer in the American species and W. japonica. The flowers of some species are fragrant, most notably W. sinensis. Wisteria species are used as food plants by the larvae of some Lepidoptera species including brown-tail. 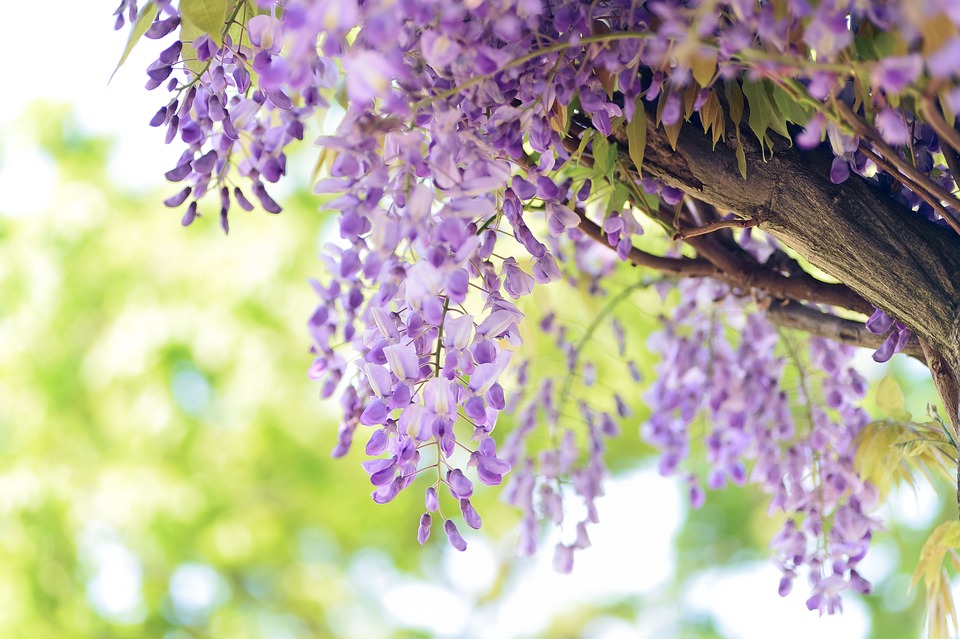 The seeds are produced in pods similar to those of Laburnum, and, like the seeds of that genus, are poisonous. All parts of the plant contain a saponin called wisterin, which is toxic.

Toxicity
All species of Wisteria contain a saponin known as Wisterin, sometimes called Wistarin, in the bark, branches, pods, roots, and seeds. There is debate over whether the flowers are toxic. An unknown and toxic resin is present as well. Poisoning from the plant can occur from ingestion of 1 to 2 seed pods and results in mild to severe gastroenteritis, nausea, frequent vomiting, abdominal pain and diarrhea. 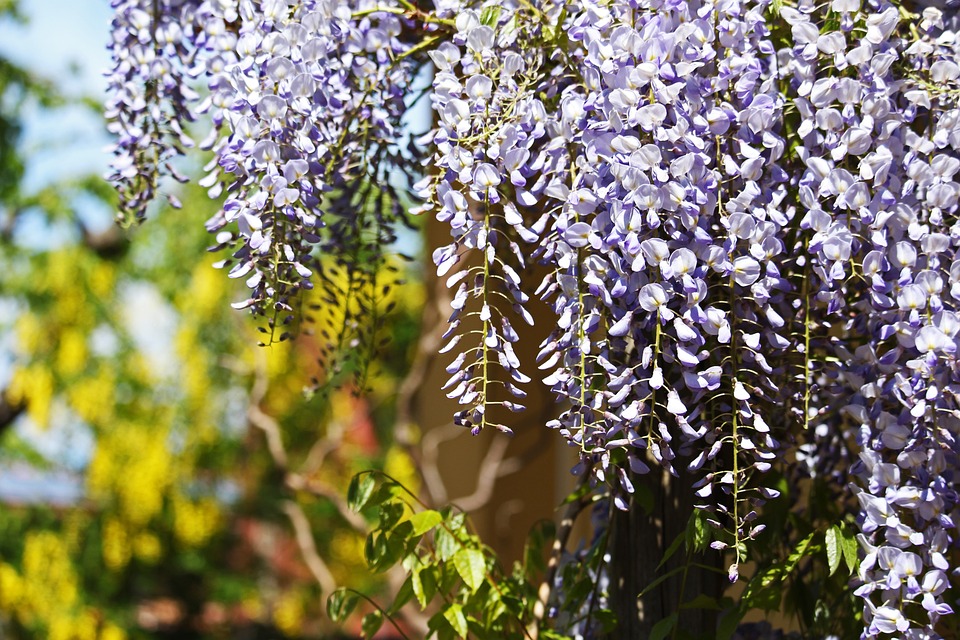 This can result in dehydration and collapse in serious cases; recovery generally occurs within 24 hours. The concentration of toxins varies in all segments of the plant and varies during different seasons. Wisterin’s structure has been shown to be similar in structure and in effects to the alkaloid cytisine, but less potent. It has a bittersweet taste. As with the cytisine containing Laburnum, its leaves are sometimes taken as a tobacco substitute. 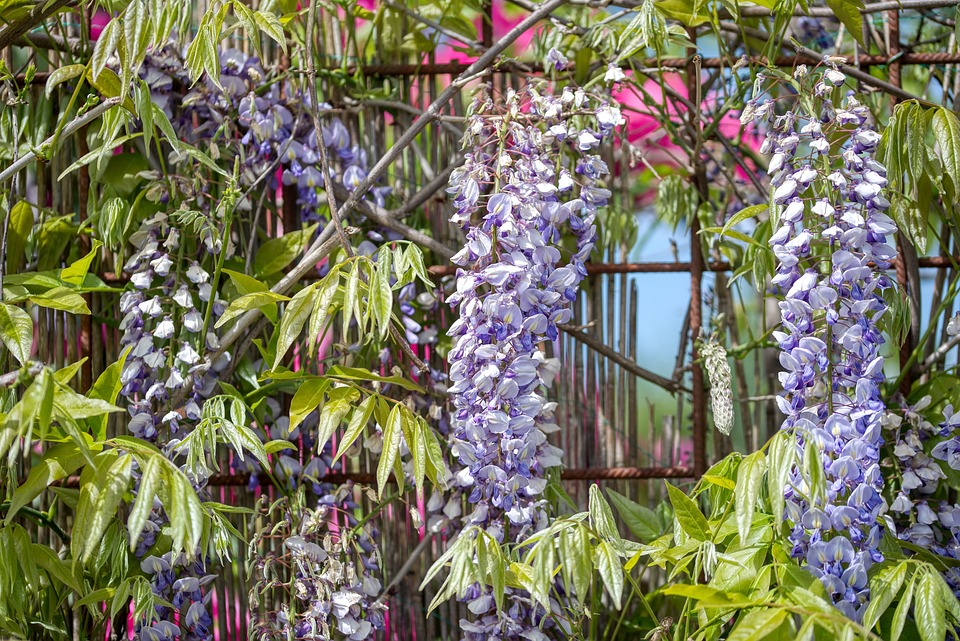 Canavanine is a common α-amino-acid constituent found in the seeds of all species of Wisteria. It serves as a defense compound against herbivores and provides a vital source of nitrogen for the growing plant embryo. The toxicity of canavanine is due to its extreme structural similarity to L-arginine, which may result in an organism’s incorporation of it into proteins in place of L-arginine. This causes aberrant proteins that may not function properly. 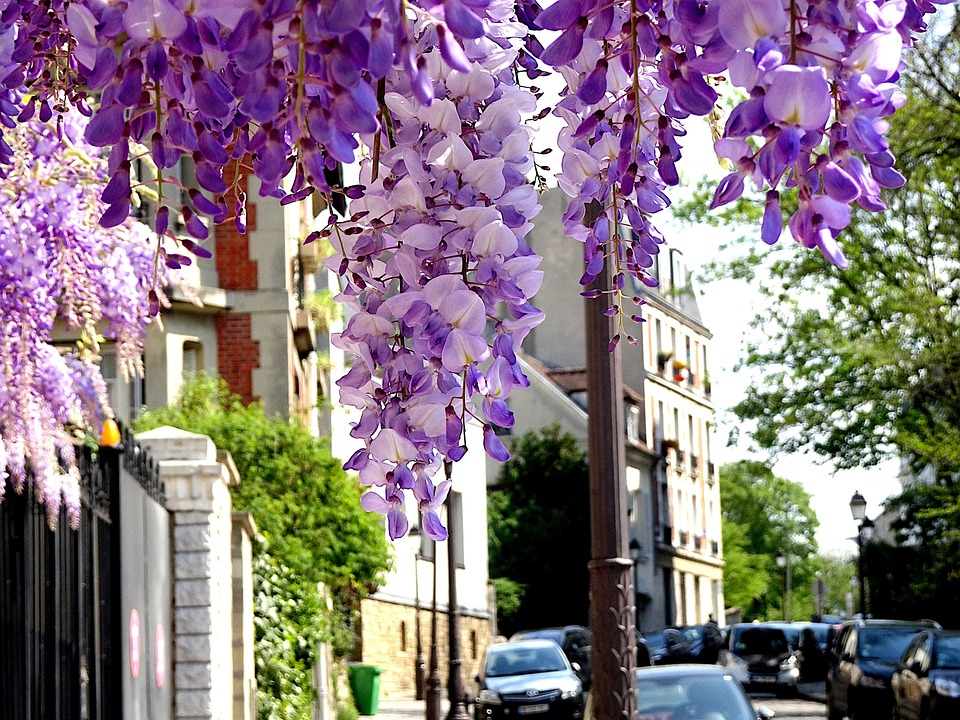 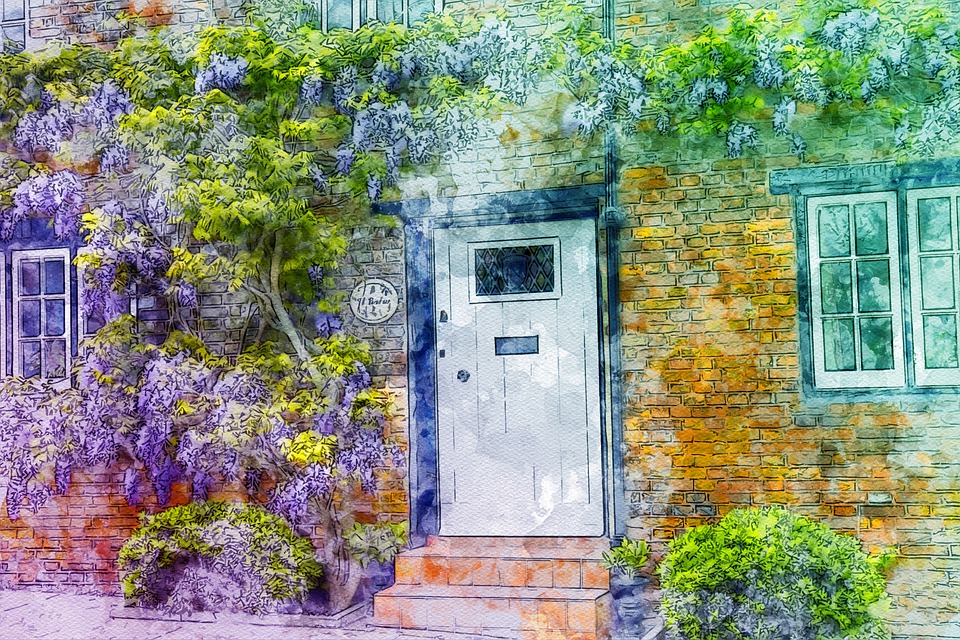 Wisteria and their racemes have been widely used in Japan throughout the centuries and were a popular symbol in family crests and heraldry.[23] One popular dance in kabuki, the Fuji Musume or “The Wisteria Maiden” is the sole extant dance of a series of five personifying dances, in which a maiden becomes the embodiment of the spirit of wisteria. In the West, both in building materials such as tile, as well as stained glass, wisterias have been used both in realism and stylistically in artistic works and industrial design 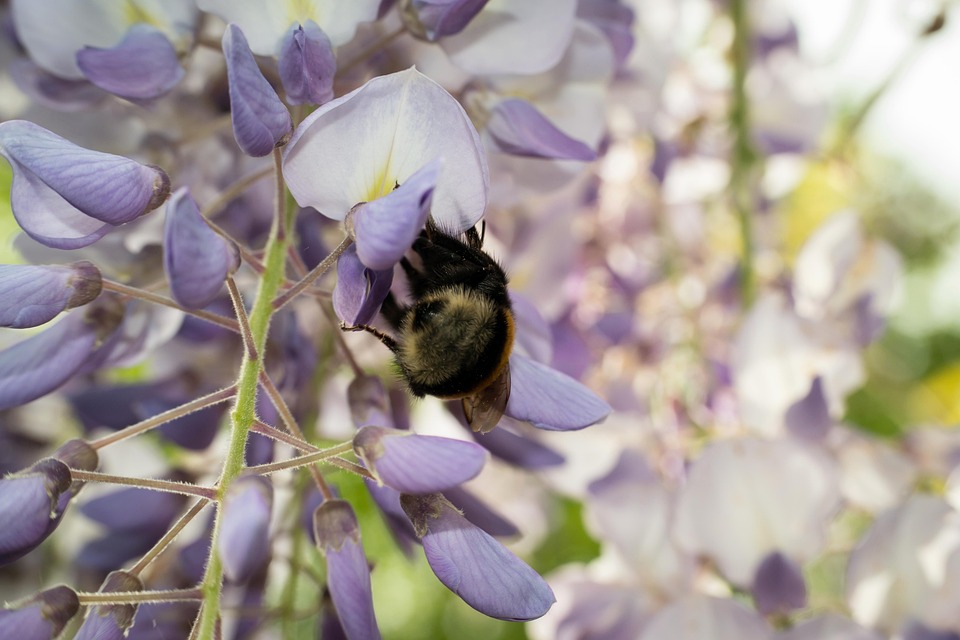 By Lisa Liberti
Previous article
852 new cases of COVID-19, three deaths on Sunday
Next article
Hot with some sun on Monday, dust in the air