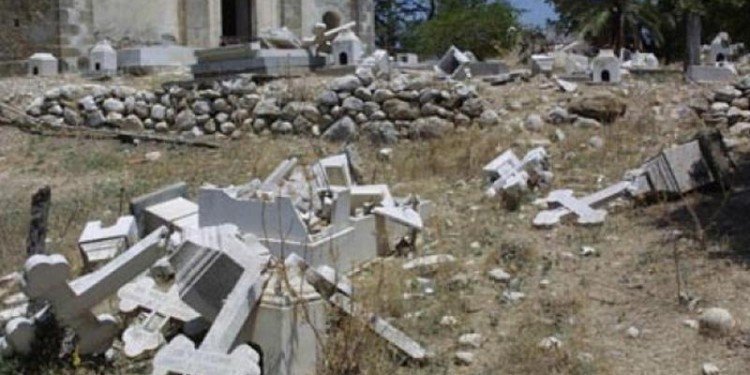 Situated at the crossroads of three continents, Cyprus has developed, since the ancient times, a cultural wealth with influences from the Byzantine, the Ottoman, Hellenic and otyher civilisations. However, many times, its geographical position posed a danger for the destruction of its cultural heritage, since on many occasions Cyprus became a victim of invasions, pillaging and conquests. The culmination of destructions was the Turkish invasion in the summer of 1974, when 36,2% of the sovereign territory of the Republic of Cyprus was occupied by the Turkish invaders. Ever since, there has been a systematic destruction and obliteration of the cultural heritage in the occupied areas.

The occupation regime in an effort to erase all Greek or Christian elements from the occupied areas has, from 1974 and on, replaced all the Greek names of villages, towns and roads with Turkish names, in violation of the UN Resolutions on Cyprus. At the same time, archeological sites, cemeteries, and mainly churches have been destroyed. From various testimonies given to the Department of Antiquities and the Cyprus Government, it seems that a number of approximately 500 churches, chapels and monasteries have been pillaged, vandalised and/or demolished, while more than 15,000 icons of saints, innumerable sacred liturgical vessels, gospels and other objects of priceless value have been stolen from the churches, and vanished.

“Armenomonastero”, which is the only Armenian monastery in Cyprus, is a characteristic example of the vandalism of churches and monasteries. Unfortunately, a large section of the monastery is ipartly ruined with the roof and the walls partly collapsed.

Equally obvious is the destruction on the wall mosaics in the church of “Panayia tis Kanakarias”, in the Karpasia area. After the looting of the church in 1979, the Department of Antiquities reported it to UNESCO and other relevant international organisations. The stolen parts from the church’s apse were returned in 1983, through the mediation of an art dealer in London. Four mosaic fragments were located in 1988 in the possession of Indianapolis art dealer Peg Goldberg. In 1991, after a lengthy trial that commenced in Indianapolis in 1989, the District Court of Indianapolis and the Court of Appeals in Chicago ruled in favour of the return of the mosaics to Cyprus. Later, in 1997 three other fragments of the mosaics were found and repatriated.

As far as the archeological sites in the occupied areas of Cyprus are concerned, the worst example of vandalism is observed on the wall mosaics at Salamina, which have deteriorated greatly.

The Turkish army of occupation exerts control in all the domains in the occupied part of Cyprus, preventing the Government of Cyprus from protecting and maintaining the monuments of its cultural heritage. The United Nations’ Educational, Scientific and Cultural Organisation (UNESCO) is also prevented from restoring and monitoring the archeological monuments.