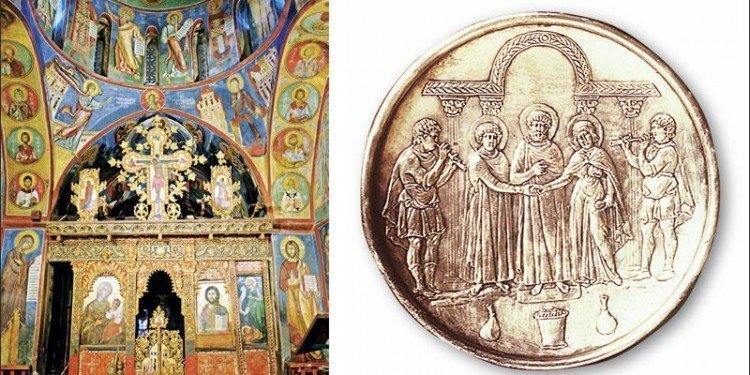 Byzantine Period In 330 AD the capital of the Roman Empire was moved from Rome to Constantinople. Christianity was declared the official religion of the state. In 395 AD the Roman Empire was split into the Western Roman Empire and the Eastern Roman Empire. The Eastern part, also known as the Byzantine Empire, included Cyprus, from the 4th to the 12th centuries. During the Early Christian-Early Byzantine period, between the 4th and 7th centuries, the church of Cyprus succeeded with great effort to remain autocephalous, fully independent and to increase its influence considerably. In 488 AD Byzantine Emperor Zeno accorded the Archbishop of Cyprus and his successors the privileges of wearing a purple cloak during official ceremonies, holding an imperial sceptre and signing in red ink. Archbishop Anthemios, wishing to express his gratitude to the Emperor for ratifying that the Church of Cyprus would be autocephalous, presented him St. Barnabas’ manuscript of St. Mathew’s Gospel, which Archbishop Anthemios had discovered in the Apostle’s tomb near Salamis. A monastery dedicated to St. Barnabas was erected on the spot where his tomb was discovered.

St. Barnabas is considered to be the founder of the Church of Cyprus. Peace prevailed in Cyprus during the first centuries of the Byzantine period. New cities sprung up, while others were abandoned as a result of major destructive earthquakes. The capital of Cyprus was moved from Pafos to Salamis-Constantia, near which the town of Arsinoe-Ammochostos (Famagusta) developed from the 7th century. Amathous remained an important centre since Roman times, while a new city was established nearby, Neapolis or Nemesos, later becoming Lemesos, in the Frankish period. The old city of Ledra was replaced by Lefkosia, which eventually became the capital of Cyprus sometime between the 11th and 12th century.

The silk industry, which the Byzantines introduced clandestinely from China, originally developed in the 6th century and grew to become one of the most lucrative handicrafts on the island. The shipbuilding yards of Cyprus continued to produce wooden ships on a large scale, while an aqueduct was built in Salamis, funded by the Byzantine Emperor Heraklios. The silver and goldsmith industries flourished, as evidenced by precious plates with depictions of the life of David, part of the discovered treasure of Lambousa (Lapithos). Some of the plates are now exhibited in the Cyprus Museum in Lefkosia, while other objects from the collection are housed in the British Museum and the Metropolitan Museum of Art, New York.

Ecclesiastical art flourished in Cyprus, adopting elements from the Greco-Roman tradition, as well as eastern elements. The island’s first churches were built based on the Roman basilica model of an elongated oblong area, divided by a row of columns into archways and aisles. As time went by domes and arches were added and various types developed around the shape of a cross. The most important examples of architecture during this period are the early Christian wooden-roofed basilicas decorated with frescoes. The most important ones are those of Lambousa, Chrysopolitissa at Kato Pafos, Kambanopetra in Constantia, Agia Triada in Gialousa, Panagia Kanakaria in the Karpas peninsula, Kourion and Agios Georgios in Pegeia. Three rare mosaics that still survive inside the apses of three early Christian basilicas depict the artistic connection between Cyprus and Constantinople.

The oldest of the three mosaics was the one in the apse of the now occupied church of Panagia Kanakaria in the Karpas peninsula, the one in the best condition is found in the apse of the church of Panagia Angeloktisti at Kiti, while the third is in the church of Panagia Kyra, in the occupied village of Livadia, near Ammochostos. The basilicas were destroyed by the Arab raids that took place between the 7th and 10th centuries, but the mosaics were spared because they were incorporated into subsequent churches. Cyprus acquired particular importance to Byzantium and to Islam in the 7th century as a result of the conflict between the powers of the time. The Arab raids against Cyprus began in 648-649 AD and continued until 965 AD,when Emperor Nicephorus II Phocas finally defeated them. Up until the 12th century the Byzantines built castles and fortifications along the Pentadaktylos mountain range at St Hilarion, Voufavento and Kantara, as well as the monasteries at Kykkos, Machairas and Agios Neophytos.