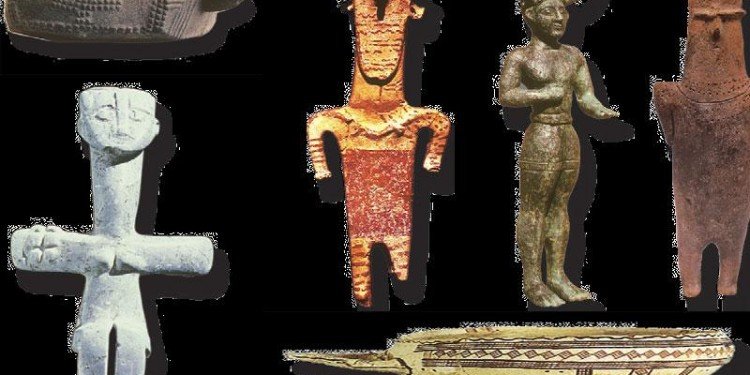 Prehistoric Age The very first signs of permanent settlement in Cyprus date from the Neolithic age (8200-3800 BC). While copper is mined in small quantities during the next period, the Chalcolithic age (3800-2400 BC), this brings about only minor changes in the way of life of the people. In both the Neolithic and the Chalcolithic ages the Cypriots lived in single room dwellings, used stone tools and vessels, made jewellery out of picrolite, ate fish, cereals, lamb and goat’s meat and buried their dead within their settlements.

The earliest pottery found dates back to the 5th millennium BC. The first significant cultural changes affecting all aspects of society took place around 2400-2200 BC, towards the end of the Chalcolithic age and at the beginning of the Early Bronze age. Instead of building cylindrically-shaped dwellings, people began to construct multi-room oblong structures, started to process copper in jewellery, applied the plough for agriculture and began to bury their dead in organised cemeteries.

Despite the fact that these developments contributed to the economic growth that occurred both during the Early (2400-1900 BC) and Middle (1900-1650 BC) Bronze age periods, people still lived in small hinterland villages. Communication and trade with the surrounding Mediterranean lands was limited.

The Late Bronze age (1650-1050 BC) was the first period of prehistoric Cyprus when tangible and irrefutable evidence exists that a number of significant developments occurred. These include the establishment of coastal towns, intensive mining of copper and other metals, development of a writing script, contact and trade with the neighbouring regions of Egypt, the Middle East, the Aegean and the wider Eastern Mediterranean area.

From the latter part of the 13th century BC successive waves of mainland Greeks begin to settle in Cyprus. Hence, Mycenaean pottery is imported in great quantities from the Aegean (Greece) and used extensively, both in everyday life as well as for religious ceremonies. Later it is reproduced locally and incorporated in the island’s ceramic tradition.

By In Cyprus
Previous article
Time, Working Hours & Holidays
Next article
1050 – 480 BC