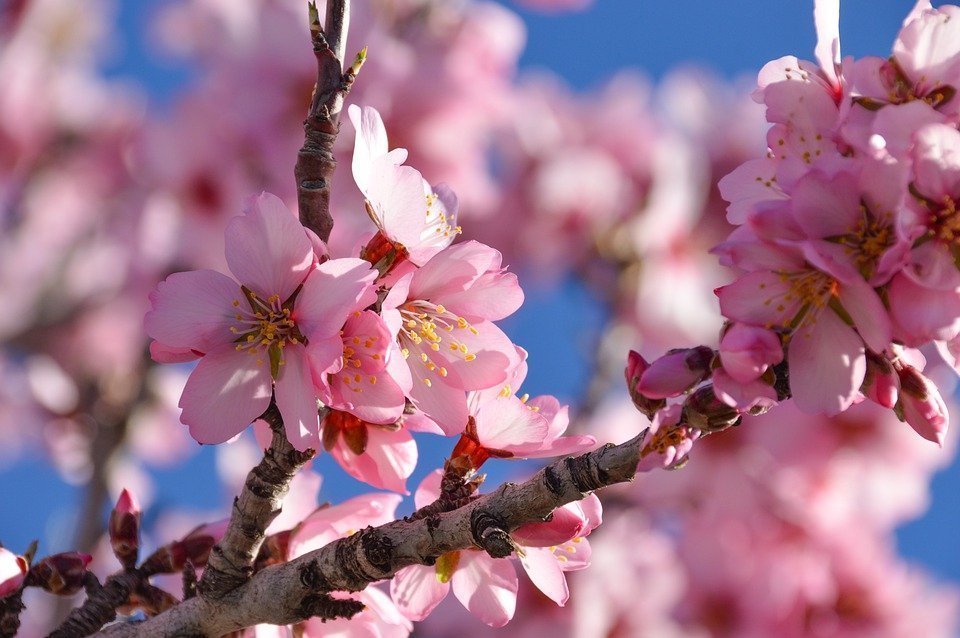 The almond is a species of tree native to the Middle East and surrounding countries. The almond is also the name of the edible and widely cultivated seed of this tree. Within the genus Prunus, it is classified with the peach in the subgenus Amygdalus. The fruit of the almond is a drupe, consisting of an outer hull and a hard shell with the seed, which is not a true nut, inside 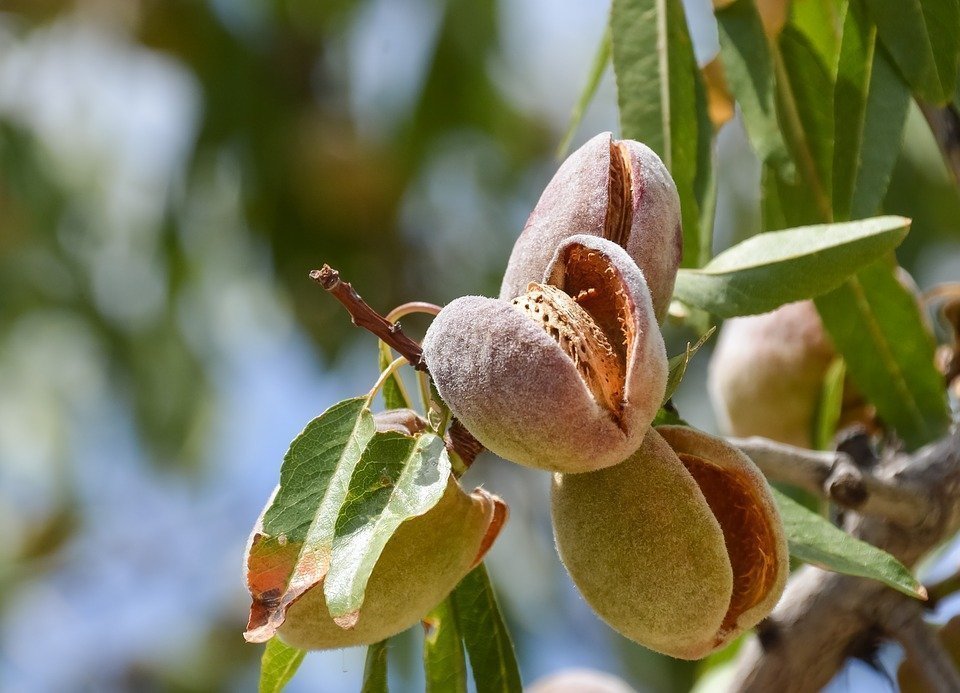 Shelling almonds refers to removing the shell to reveal the seed. Almonds are sold shelled or unshelled. Blanched almonds are shelled almonds that have been treated with hot water to soften the seedcoat, which is then removed to reveal the white embryo. 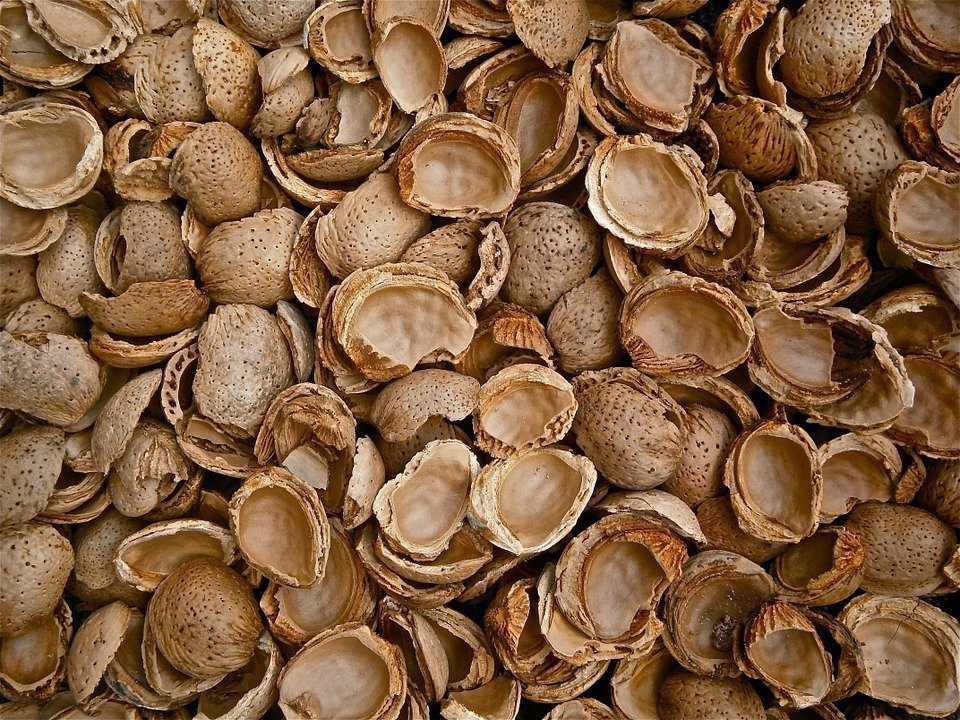 The almond is highly revered in some cultures. The tree is native to the Middle East and is mentioned numerous times in the Bible. In the Hebrew Bible, the almond was a symbol of watchfulness and promise due to its early flowering.

In the Bible the almond is mentioned ten times, beginning with Book of Genesis 43:11, where it is described as “among the best of fruits”. In Numbers 17 Levi is chosen from the other tribes of Israel by Aaron’s rod, which brought forth almond flowers. According to tradition, the rod of Aaron bore sweet almonds on one side and bitter on the other; if the Israelites followed the Lord, the sweet almonds would be ripe and edible, but if they were to forsake the path of the Lord, the bitter almonds would predominate 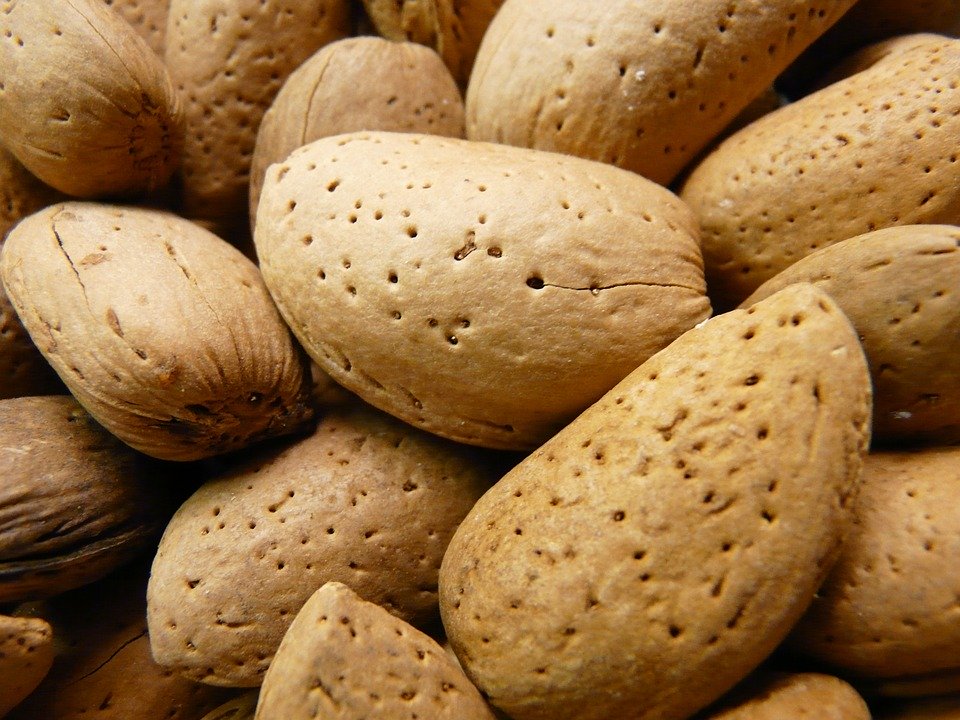 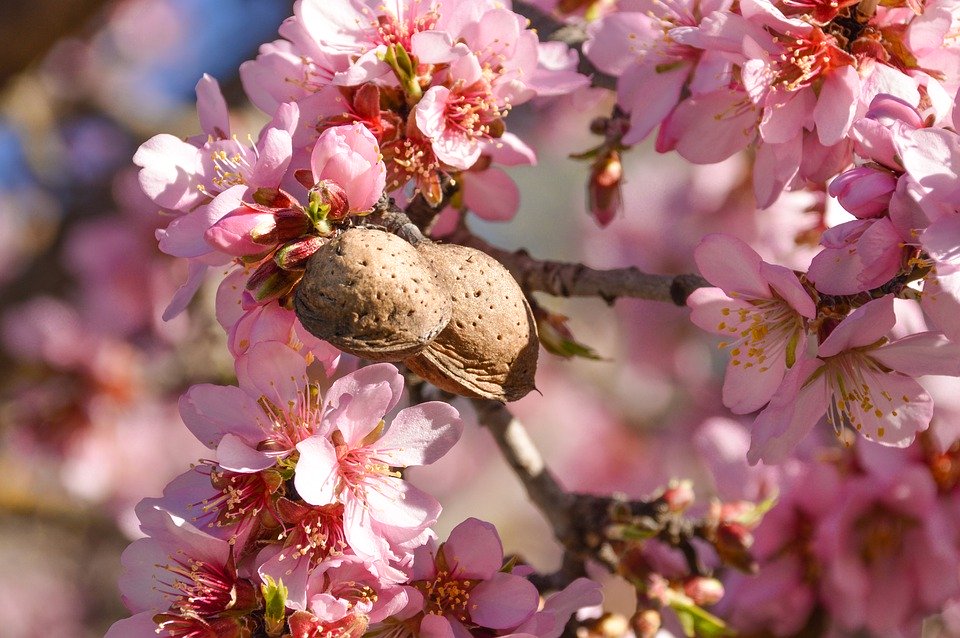 Similarly, Christian symbolism often uses almond branches as a symbol of the Virgin Birth of Jesus; paintings and icons often include almond-shaped haloes encircling the Christ Child and as a symbol of Mary. The word “Luz”, which appears in Genesis 30:37, sometimes translated as “hazel”, may actually be derived from the Aramaic name for almond (Luz), and is translated as such in some Bible versions such as the NIV. The Arabic name for almond is لوز “lauz” or “lūz”. In some parts of the Levant and North Africa it is pronounced “loz”, which is very close to its Aramaic origin 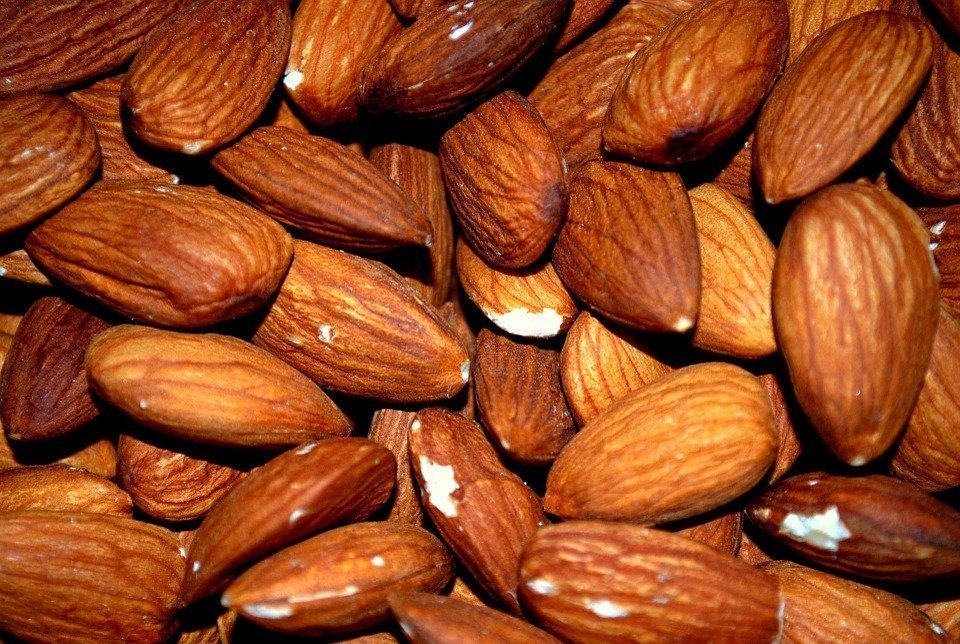 Blossoming almond trees inspired a genius Dutch post-impressionist painter Vincent van Gogh thus he immortalised them in his work “Almond Blossoms”. This painting belongs to a group of several paintings made by him in 1888 and 1890 in Arles and Saint-Rémy, southern France.

Flowering trees were special to van Gogh. They represented awakening and hope. He enjoyed them aesthetically and found joy in painting flowering trees. The works reflect the influence of Impressionism, Divisionism, and Japanese woodcuts. Vincent wrote to his brother Theo, “Down here it is freezing hard and there is still snow in the countryside,” and he has “two small studies of an almond-tree branch already in flower in spite of it.” 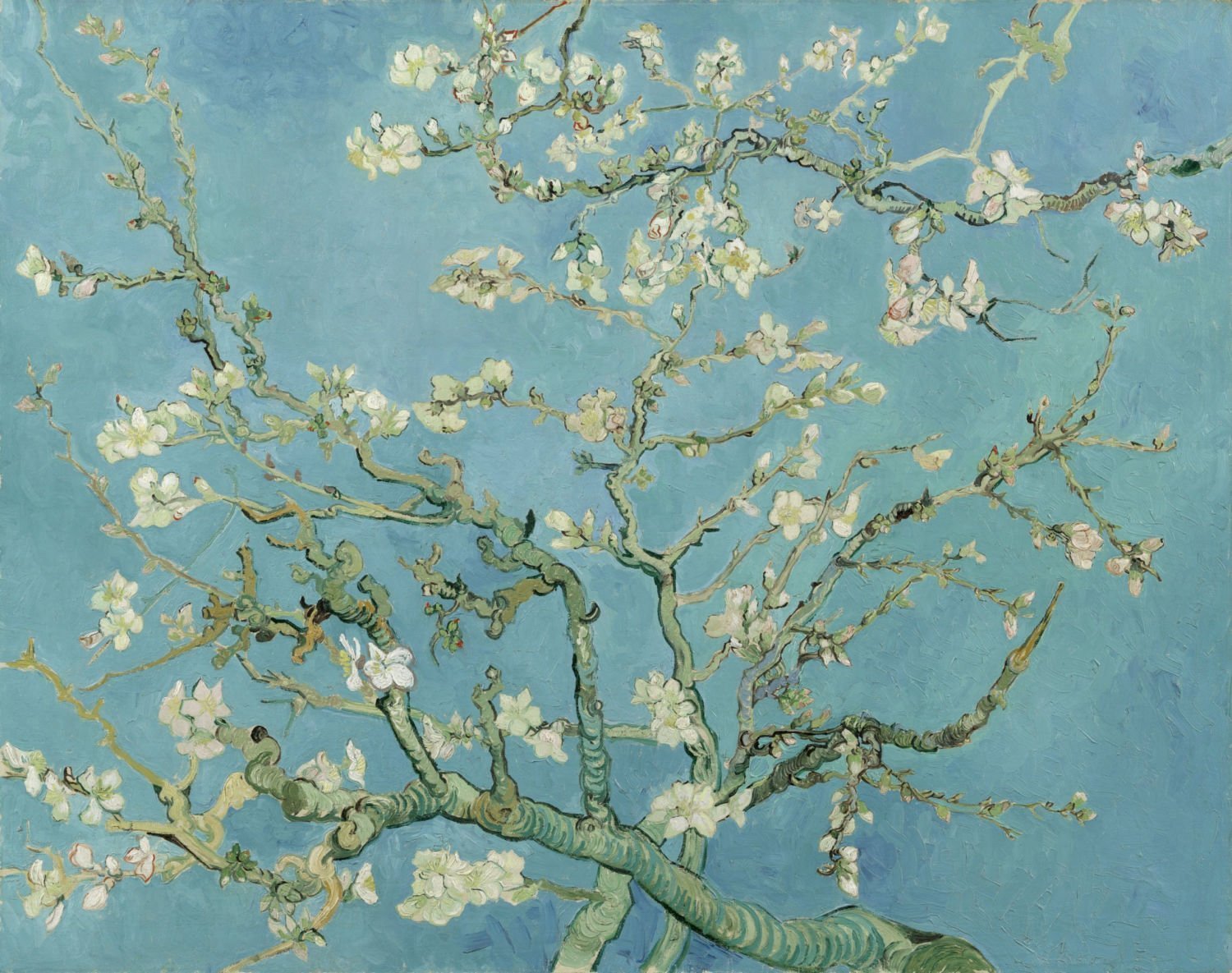 In Cyprus and Greece, ground blanched almonds are used as the base material in a great variety of desserts, usually called amygdalota (αμυγδαλωτά). Because of their white color, most are traditionally considered wedding sweets and are served at wedding banquets. In addition, a soft drink known as soumada is made from almonds in various regions. 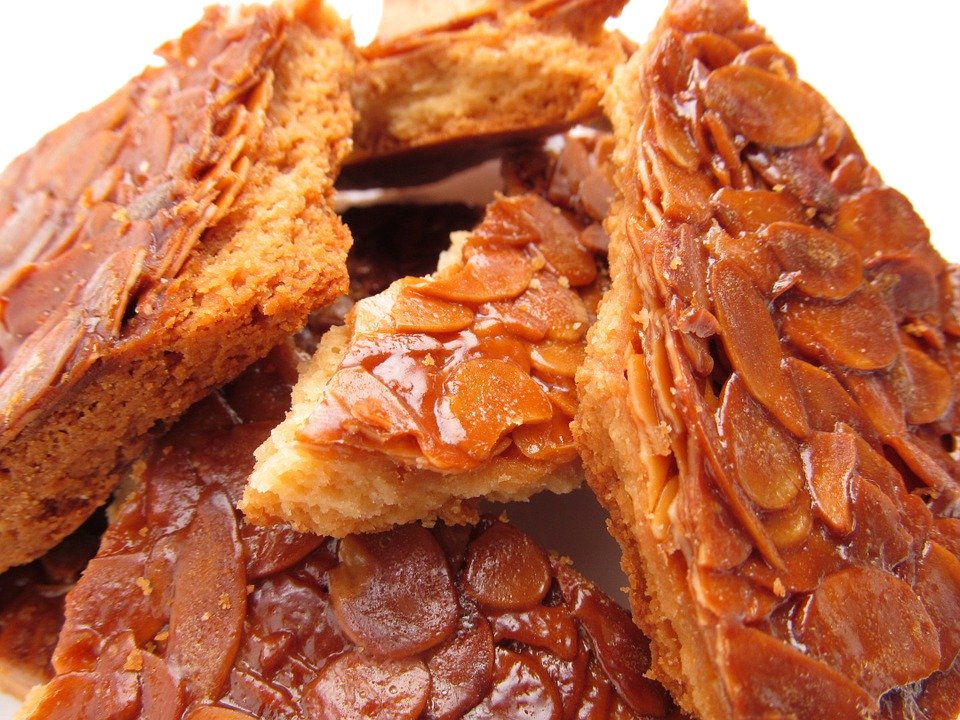 Almonds are included as a good source of protein among recommended healthy foods. Some researches indicated that regular consumption of almonds may reduce the risk of heart disease by lowering blood levels of LDL cholesterol. Almonds are extremely nutritius: they contain 21.6 g of the carbohydrates, 49.9 g of fat and Protein 21.2 g. Energy 2,423 kJ (579 kcal) for 100 grams of raw product 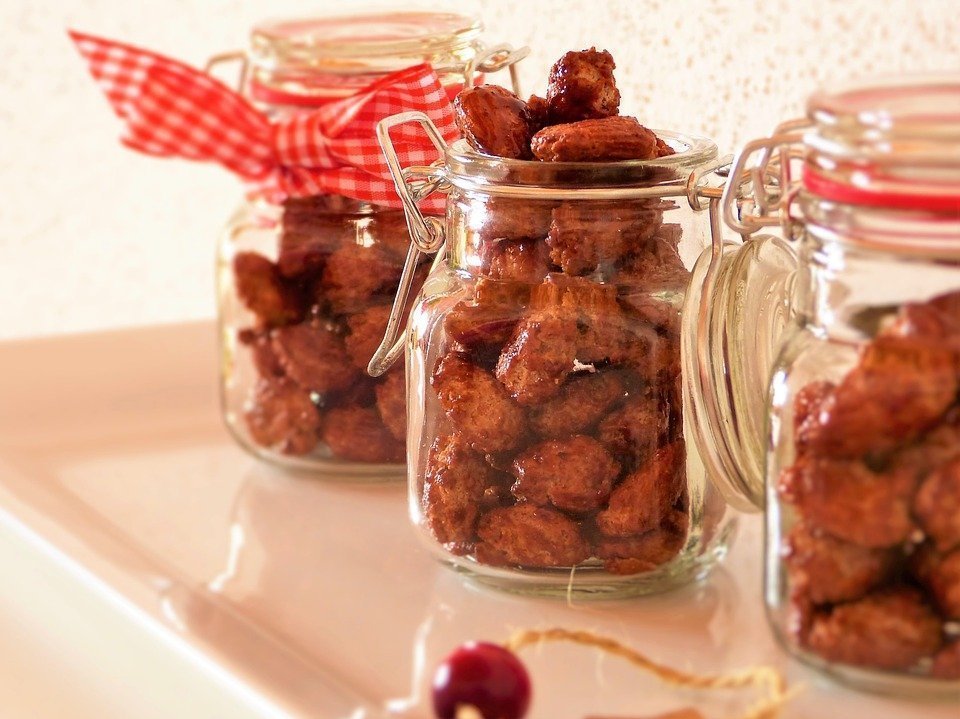 While the almond is often eaten on its own, raw or toasted, it is also a component of various dishes. Almonds are available in many forms, such as whole, sliced (flaked, slivered), and as flour. Almond pieces around 2–3 mm in size, called “nibs”, are used for special purposes such as decoration. Almonds yield almond oil and can also be made into almond butter or almond milk. These products can be used in both sweet and savoury dishes 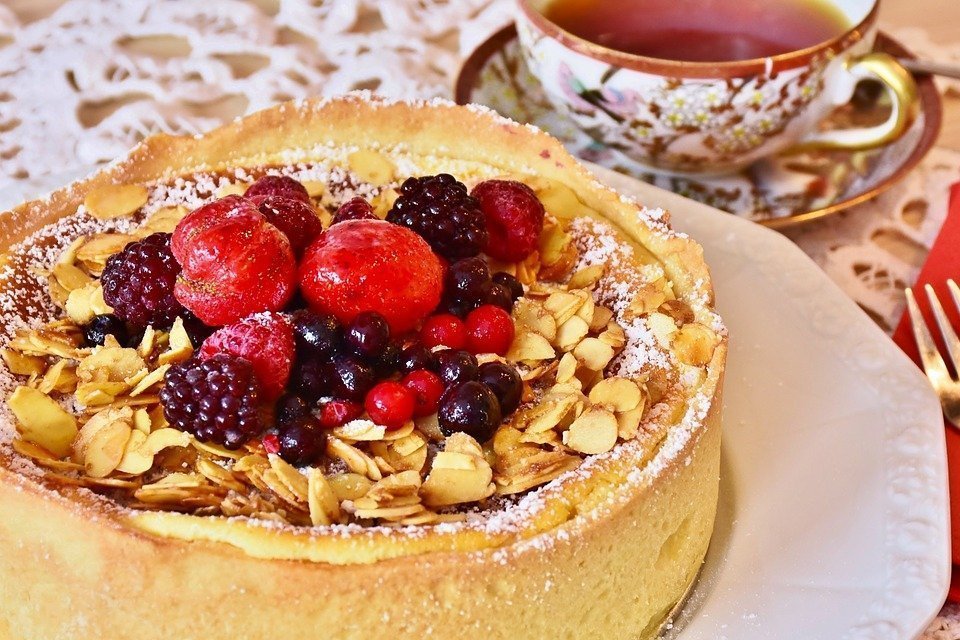 Along with other nuts, almonds can be sprinkled over breakfasts and desserts, particularly muesli or ice cream-based dishes. Almonds are used in marzipan, nougat, many pastries (including Jésuites), cookies (including French macaroons), and cakes (including financiers), noghl, and other sweets and desserts. 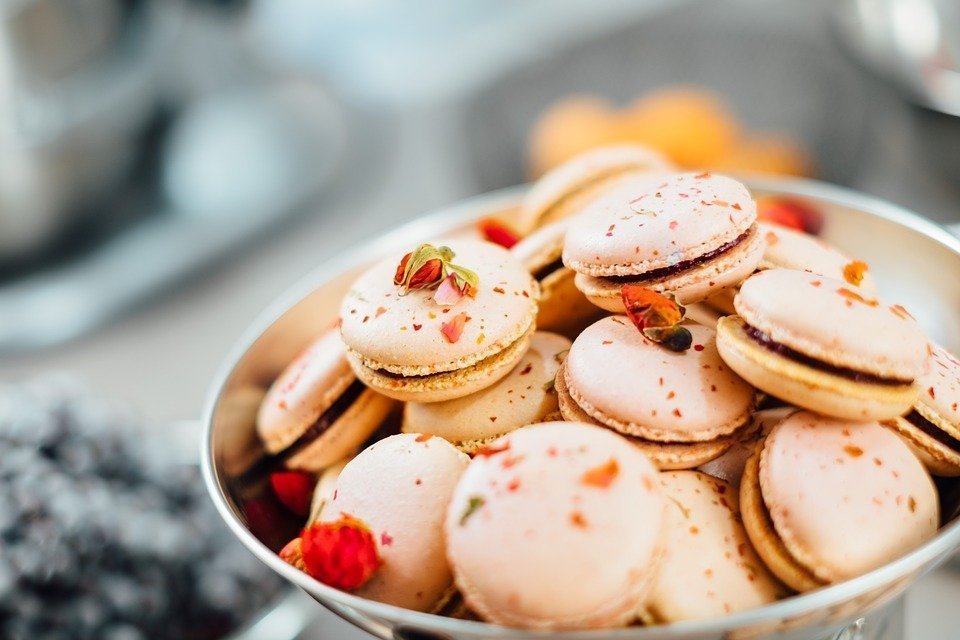 They are also used to make almond butter, a spread similar to peanut butter, popular with peanut allergy sufferers and for its naturally sweeter taste.

The young, developing fruit of the almond tree can be eaten whole (green almonds) when they are still green and fleshy on the outside and the inner shell has not yet hardened. The fruit is somewhat sour, but is a popular snack in parts of the Middle East, eaten dipped in salt to balance the sour taste. Also in the Middle East they are often eaten with dates. They are available only from mid-April to mid-June in the Northern Hemisphere; pickling or brining extends the fruit’s shelf life.

Almond cookies, Chinese almond biscuits, and Italian ricciarelli are also made with almonds 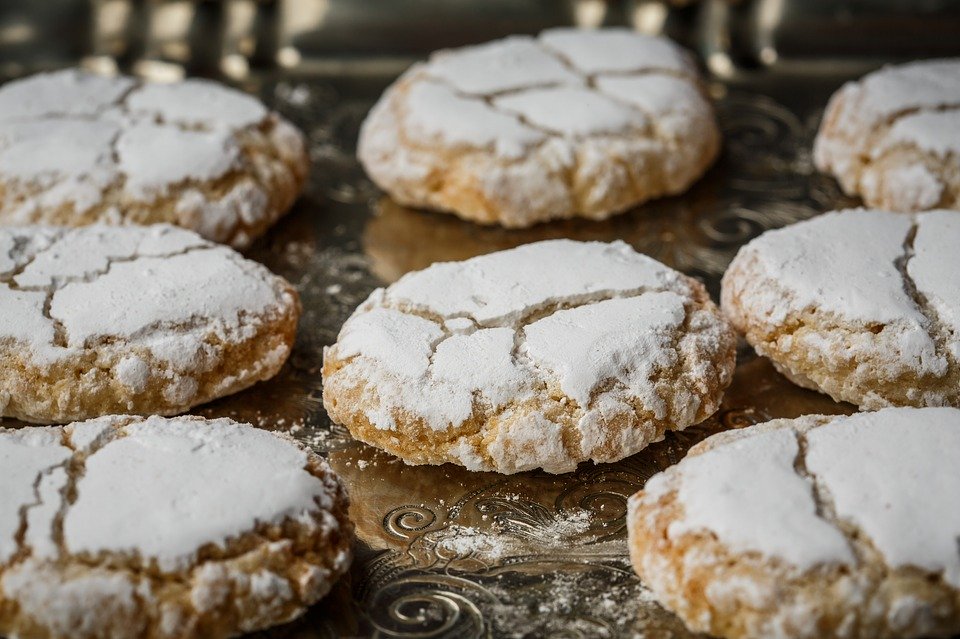 If you want to enjoy the stunning view of the blossoming almond trees and their gentle fragrance, head towards Troodos mountains and you will find plenty of almond groves around the villages of Kakopetria, Kalopanagiotis, Lefkara, Limnatis, Platres and many more. There is an annual Almond Blossom Festival in Limtatis which marks the beginning of spring and awakening of nature. 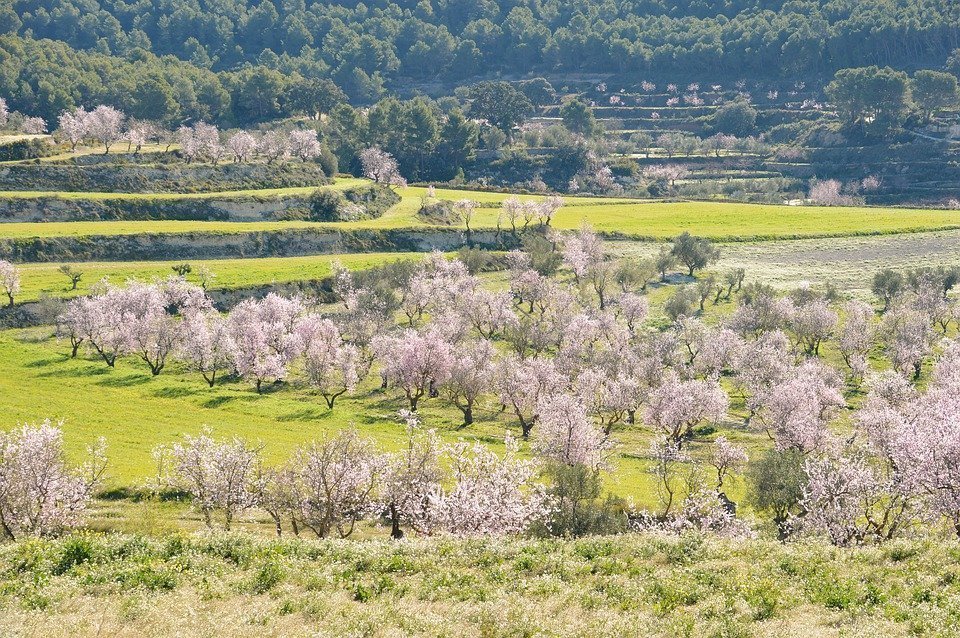 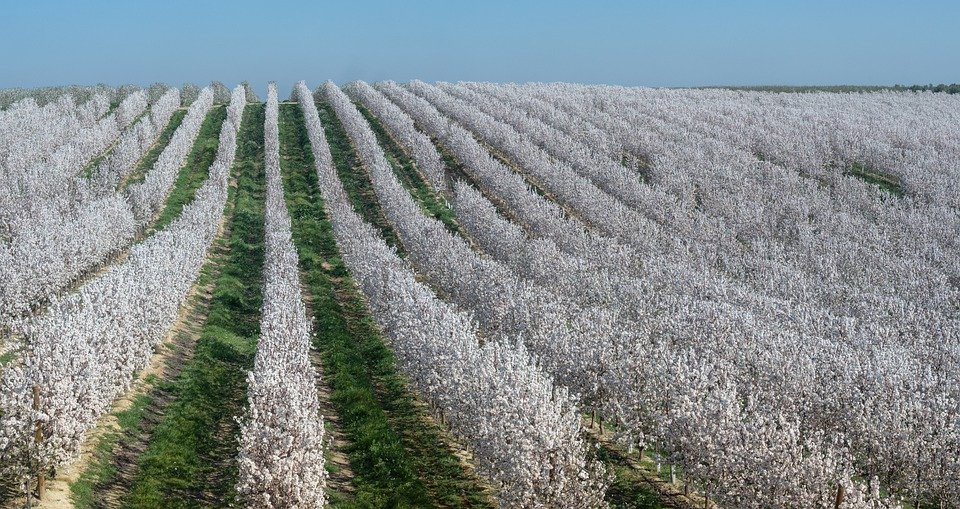 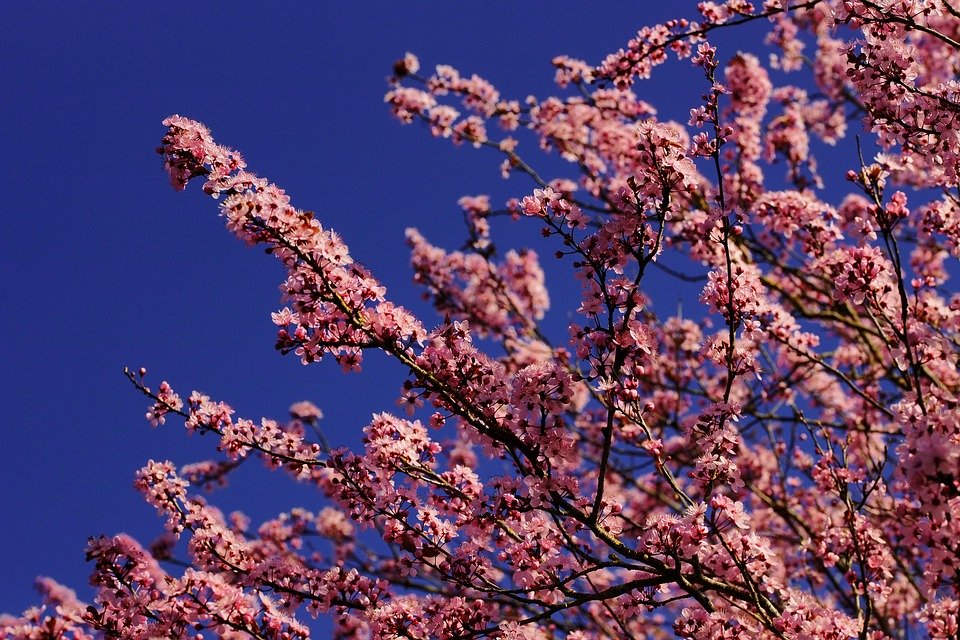 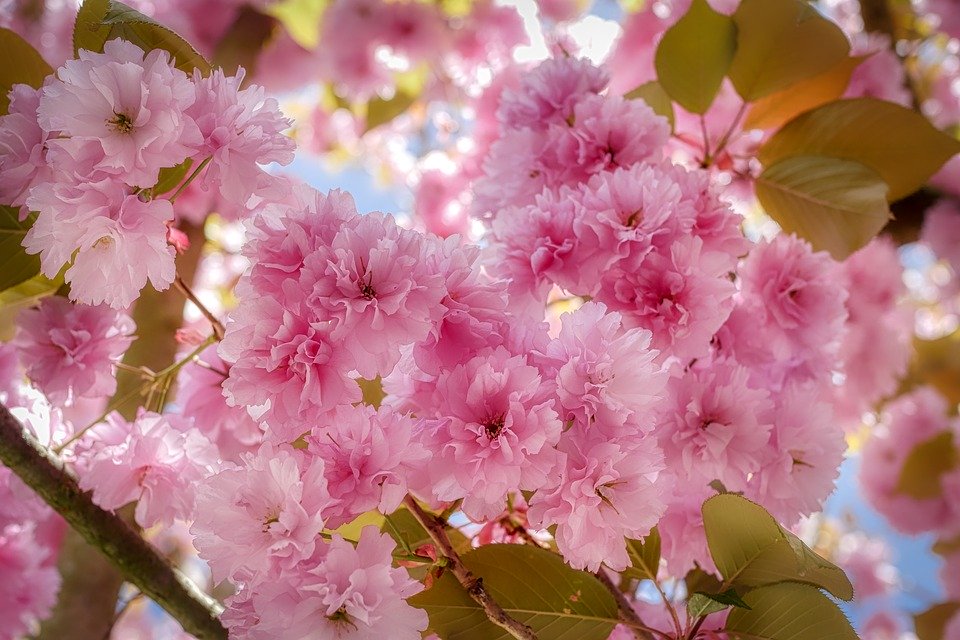 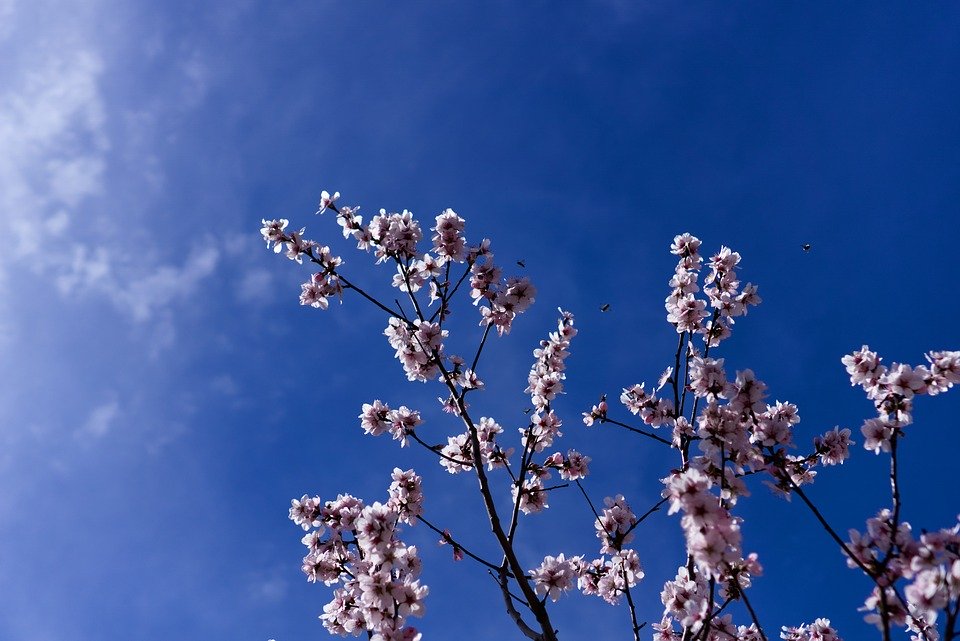 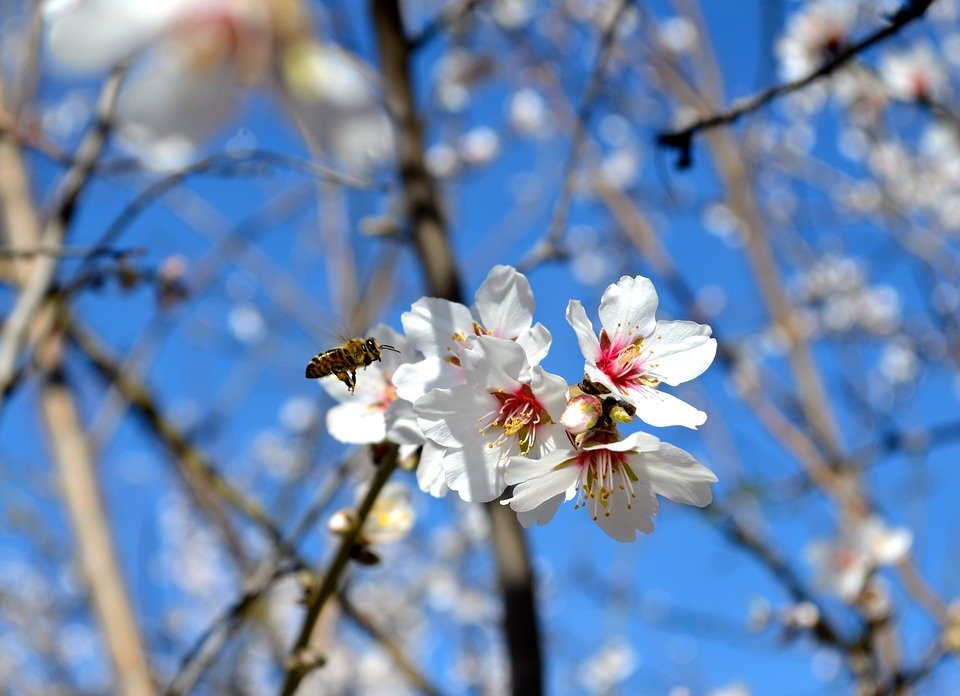 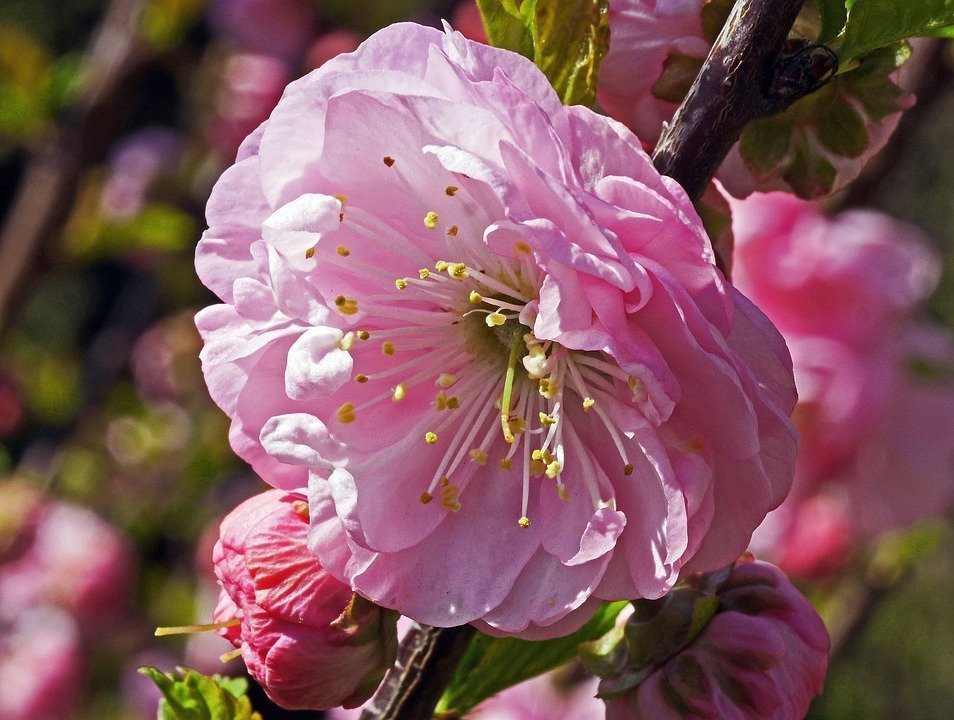 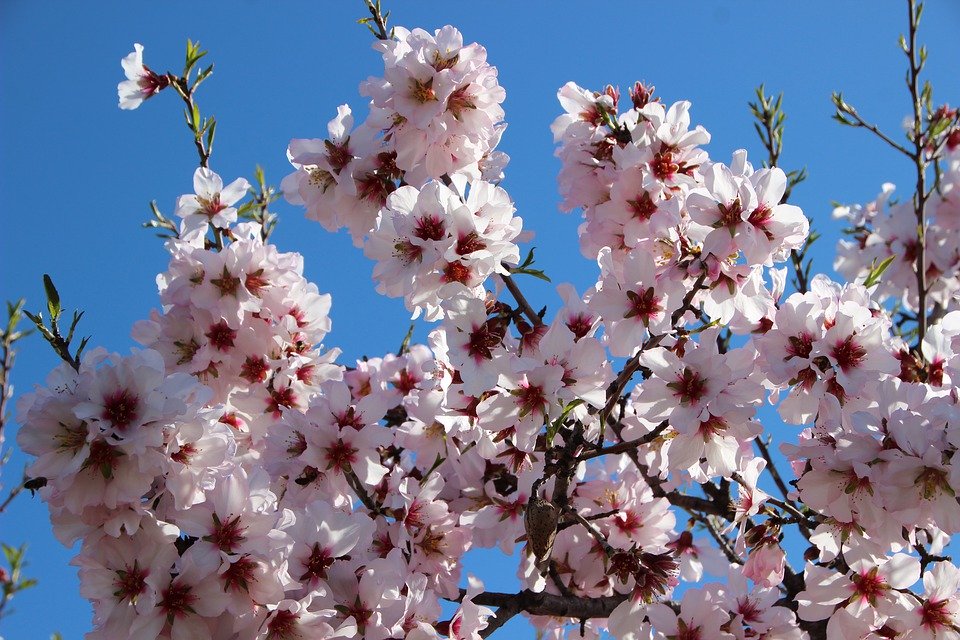