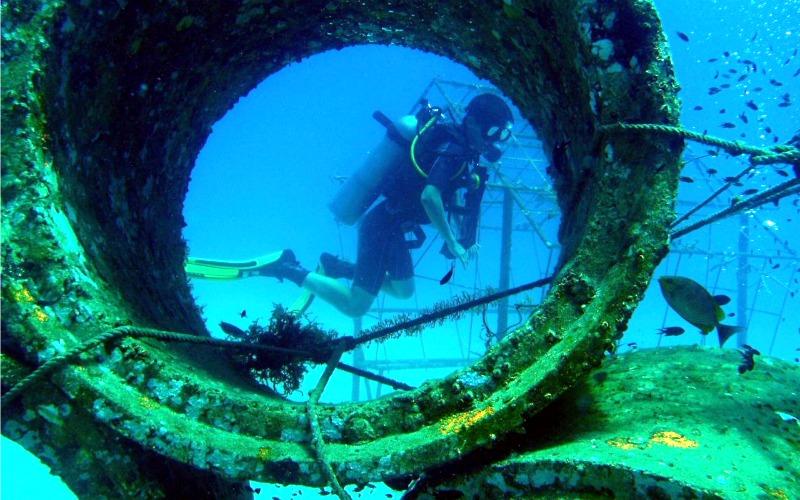 Four vessels have over recent years been sunk off the coast of Cyprus to create artificial reefs for scuba divers.
Off the coast of Dasoudi, Limassol are the Lady Thetis and Costandis
According to the Cyprus Dive Centres Association (CDCA) website, Lady Thetis is a recreational cruise vessel built in Germany and registered under the Cyprus flag. After a long life at sea, the vessel was deployed at a depth of around 21-23 metres.
Fishing vessel Costandis operated as a bottom trawler and was built in USSR in 1989. Its original Russian name was “Zolotets.” It was registered under the Cyprus flag in 1997 and operated in international waters in the Eastern part of the Mediterranean Sea for a short period of time.  Costandis was sunk at a depth of around 25 metres.
The Nemesis III was sunk at a depth of 23m off Vrysoudia, Protaras, like all the vessels, after being cleaned and prepared for sinking in line with EU regulations.
A bottom trawler, Nemesis III was built in France in 1956 and was previously named “Thalia”. It was brought to Cyprus in 1987 where it was registered under the Cyprus flag. Soon after, it was licensed by the Department of Fisheries to operate in International Waters. Nemesis III operated in the Eastern part of the Mediterranean Sea and in Libyan waters as well.
Off the Moulia coast, in Yeroskipou, Paphos is the wreck of the Laboe.
A cruise vessel, the Laboe was built in Rendburg shipyard, Germany in 1940. It was a cruise vessel and was brought to Cyprus in 2006 by a private company. Its length is 21.5 metres and width 5 metres.
Cyprus’ first artificial reef, created off Amathunda in 2009, now looks very much like a natural reef after attracting various forms of marine life.
Another artificial reef, made using materials other than a sunken boat, in also in the pipeline.
Visit the Cyprus Dive Centres Association (CDCA) website www.dca-cy.com/ for more information