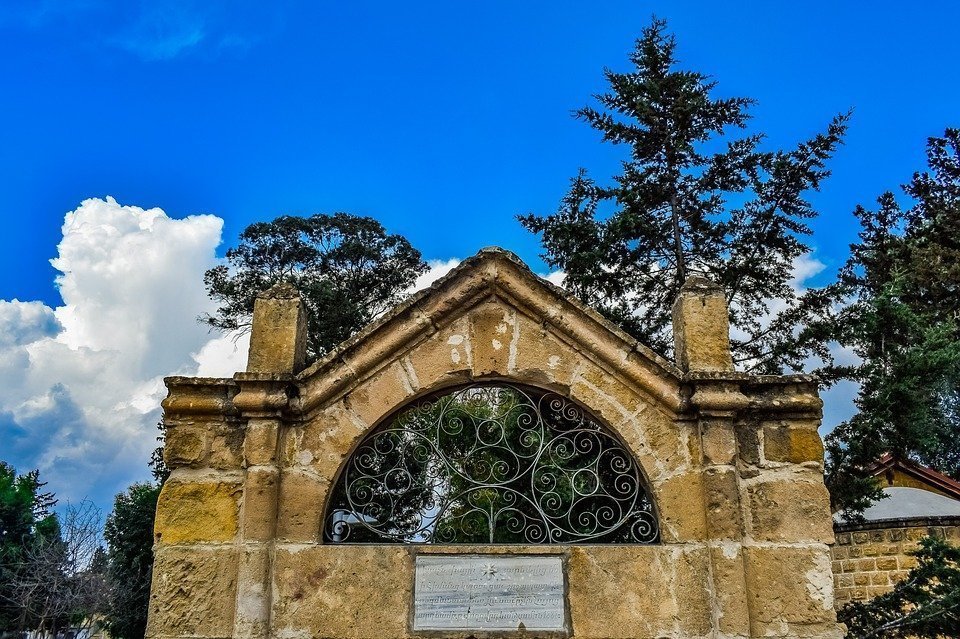 The Armenian cemetery in Nicosia, near the dividing line, which splits the Cyprus capital into two, stands as a vivid evidence of the history of the Armenian community on this East Mediterranean island Republic,  long before the Armenian Genocide. 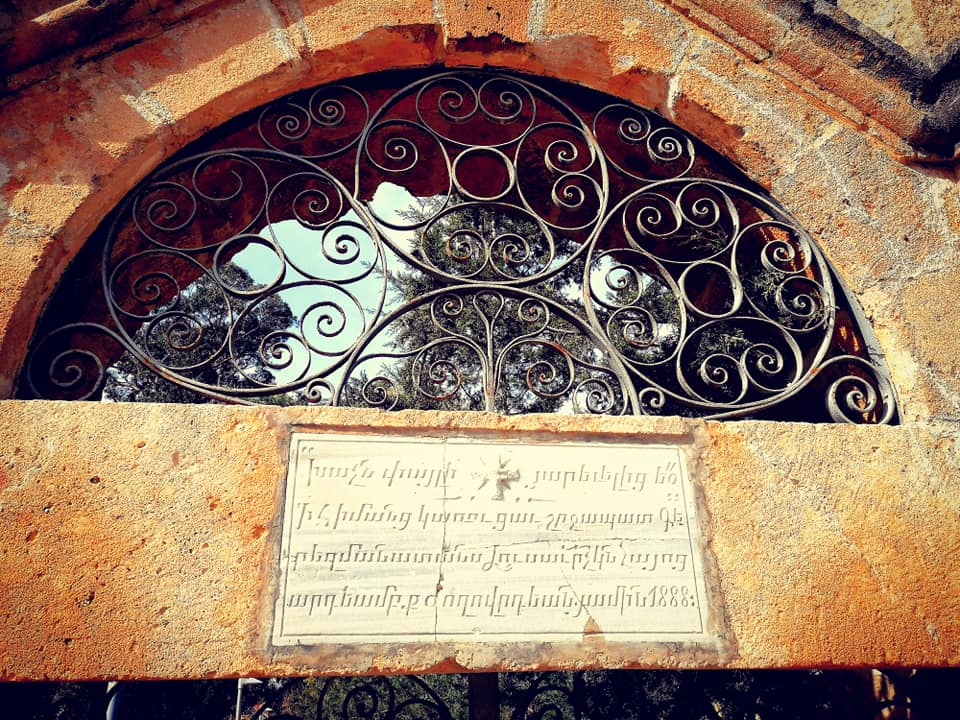 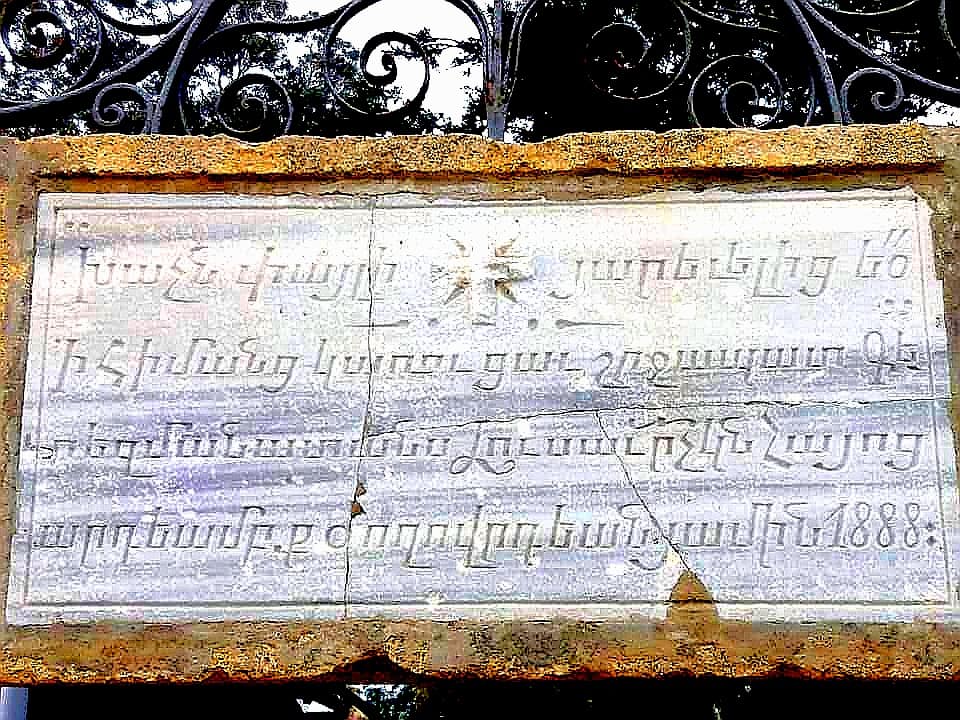 The cemetery, located near the Ledra Palace Hotel, in the UN-controlled buffer zone, and the Law Courts, carries a long history that dates back to the 15th Century, when it became – according to the records – a burial site for the Lusignans and the Dominicans.

Its existence came to my attention for the first time in 2008. The renovation works were still under way and I was then wondering why this site had been left neglected and what kind of history it carries. Several years passed by and a recent visit to the Home for Cooperation reminded me of the place. And so, I decided to write a story about it.

Researcher-scholar Alexander-Michael Hadjilyra was my guide back to time for the purpose of this story. He perhaps knows better than anyone the rich history of this cemetery and when I spoke to him on the phone he was enthusiastic about the idea and excited that he would be able to share his deep knowledge with a journalist.

He visited my workplace, carrying a lot of pictures and useful material from many years of research.

From our hour-long conversation, I was mostly impressed by a few things: some graves in the cemetery are of particular interest. A tomb (Stepan Papazian, 1875) carries a tombstone with an inscription in Armenian script but in the Turkish language, a second one (Araxi Djiladjian, 1909) has a column cut slantwise, the Masonic symbol of separation, a third one is an obelisk and a mausoleum (Bedros Parounagian, 1928), a fourth one dates back to 1867 (Hagop Guvezian) and an unidentifiable one, from 1888 in the form of a khachkar (cross-stone). Also of striking interest are the medieval tombstones, with coats of arms and crests. 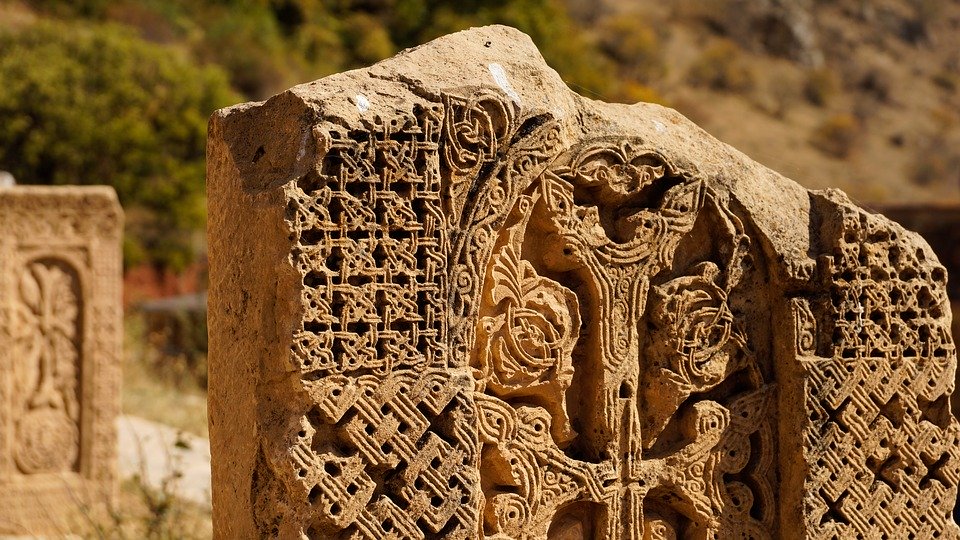 The tombstone in Turkish written in the Armenian script is the tomb of Stepan Papazian. He was just eight years old when he passed away, on 20 August 1875. Hadjilyra tells us that, according to the inscription on the tomb, the child’s health was frail, he was in misery and discomfort for eight years and he found tranquillity in the eternal life.

Stepan Papazian was the son of Ohannes Papazian from Yerzinga and Negdar Eramian, daughter of the famous land owner Artin Boghos Eramian, from the village of Dheftera in the Nicosia district, and Caterina Carletti.

Hadjilyra tells us that what is also important and has a historic significance about the cemetery and Nicosia as a whole is the fact that when Royal Engineers Lieutenant Horatio Herbert Kitchener visited the new colony (Cyprus) during 1878-1879, he prepared a map of the city and marked eight points outside the walls of Nicosia. One of them is the Armenian cemetery, which is the only location of Kitchener’s map that exists until today. Kitchener (1850-1916) would later conduct an extensive work for the trigonometric survey of the island.

The cemetery, according to the records, seems to have existed as a burial ground since the 15th Century, just off the Venetian walls of Nicosia.

Hadjilyra tells us that there is no precise date of the construction of the site. However it is believed that it was destroyed during the construction of the Venetian walls of Nicosia. We know that whatever stood there around 1567-1570 was razed to the ground by the Venetians for security reasons, he explains: not even trees were spared, out of fear that the Ottomans could use them as a foothold.

We do not know exactly when this site became an Armenian cemetery, because according to research and available records, any information that existed regarding this was destroyed during a fire that broke out at the Armenian Prelature in 1860.

The Armenian Prelature, Hadjilyra says, was founded in Cyprus in 973 and information on its Prelates exist since 1179, partial for the Latin Era (1192-1570) and more complete from the Ottoman Era (1571-1878) and later on. He points out that the 1860 fire has deprived us of a lot of information from the past. However, information from the Armenian families of the island during the Ottoman occupation show that the first burials must have taken place around 1810, if not earlier.

In April 2005 works were carried out at the cemetery; sadly, the bulldozer driver hastily destroyed the entire southern part of the cemetery, due to miscommunication and this is one of the reasons we cannot be sure when the first burials took place from the graves and the tombstones, Hadjilyra tells us. 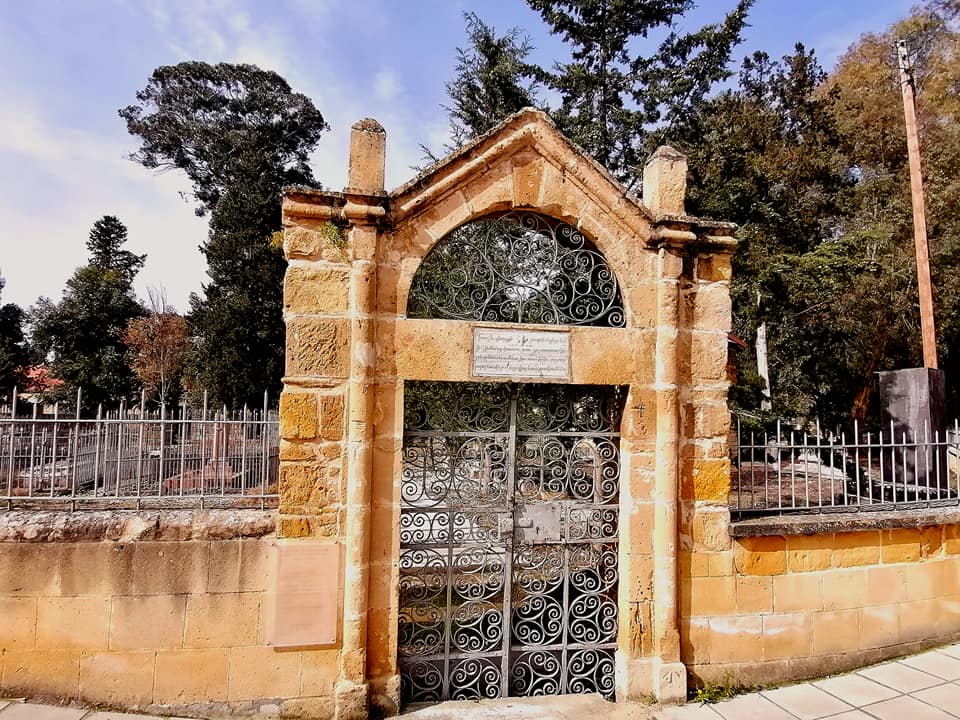 The research done by Hadjilyra demonstrates that in 1963, before the inter-communal troubles, the then Vice President of the Republic, Dr. Fazıl Küçük, moved his practice on Shakespeare street, where the cemetery is located. The road was widened to accommodate his office, so the road was extended to the northern part of the cemetery.

Hadjilyra adds that about a hundred graves had to be demolished and the remains were transferred to the second cemetery in nearby suburban village of Ayios Dhometios. Therefore, he says, possibly the oldest section was the northern part of the site, which does not exist today.

He says that when the remains were exhumed, Father Vazken Sandrouni, who was the Armenian parish priest at that time, had some kind of a memorial for each and every one of them and he then buried them in a massgrave in Ayios Dhometios, where the second Armenian cemetery stands.

One can find records about the burials at the Prelature dating back to 1 November 1877. Hadjilyra informs us that a new priest had just arrived on the island back then, Fr. Hovhannes Shahinian, who considered it his duty to register all data relating baptisms, marriages, burials, etc. He also conducted a census of the 152 Armenians who were then residents on the island.

According to the available data from the late Ottoman Era, around 150-200 Armenians used to live in Cyprus, a number that gradually increased to exceed 600 in the 1911 census. This was the result of previous persecutions and also employment opportunities in Cyprus.

Hadjilyra says that, because of the Armenian Genocide by the Turks, around 9,000 refugees suddenly arrived on the island. Some of them found a permanent home here, but for many Cyprus wasn’t the final destination, rather a way station.

Some of them died on the island, others chose to remain here and make it their home and suddenly the Armenian community reached 1,573 persons in 1921 census. It is clear that, due to the increase in numbers, the burials also increased. The last burial took place in 1931 and that is because, Hadjilyra informs us, the British – who then ruled the island – prohibited the operation of cemeteries in close proximity to the city, for public health reasons. 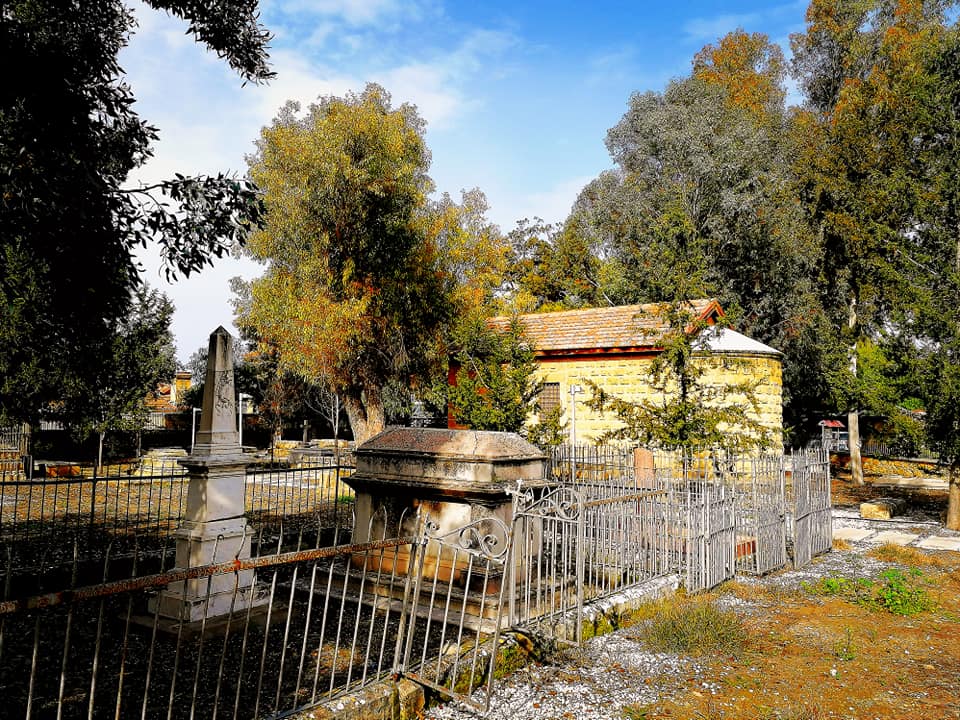 The 1931 burial took place on July 5th. A baby of just 9 months old (Bedros Aynedjian) was buried on that date. Infant mortality was not uncommon back then, Hadjilyra explains.

From 1932 until 1963 memorials were held for the souls of the buried a few times a year, but from then onwards the cemetery became neglected, due to its proximity to the dividing line. Small-scale repairs took place in 1988 at the cemetery’s chapel, but the substantial restoration started in 2008.

Hadjilyra says that work began in June 2008 and carried on until May 2009, thanks to the initiative and efforts of the Armenian MP in the House of Representatives, Vartkes Mahdessian, and the Armenian Ethnarchy. An important sum was secured from the Ministry of the Interior, making the restoration possible, and the cemetery stands as we see it today.

In late March 2010 a commemorative plaque was placed, visible from the entrance of the cemetery. Hadjilyra explains that it is considered perhaps the only one of its kind in Cyprus. It lists the names of the 419 people buried there, along with their burial dates. For example, for the years of 1877-1879 we have only one name next to each year, but for the years when more than one burial took place, the names are listed alphabetically. The maximum number of burials in a year is 25, for 1922 and 1926.

The Prelature records show, Hadjilyra says, that from 1877 until 1931 there were 463 documented burials (of which the remains of 44 people were transferred to the Ayios Dhometios cemetery in 1963), however it is almost certain that more people were buried there.

Hadjilyra explains that Catholic and Protestant Armenians were also buried there and obviously the funeral ceremonies did not take place at the Orthodox Armenian Church, therefore he believes that more burials actually took place.

The cemetery’s chapel is dedicated to Saint Paul (Boghos) and is locked for safety reasons, as is the cemetery. Inside the chapel there is a wooden altar inside, an icon of the Virgin Mary with the baby Jesus, a small candle counter, a candelabrum and some pews.

The cemetery gate is also of great importance. It was built, along with the surrounding, in 1888 with the donations of the faithful and it bears a commemorative inscription. The gate, as Hadjilyra indicates, does not remind us of the modern era, it is unique in its kind. The benefactor, Boghos (Paul) G. Odadjian from Constantinople (1853-1891), came to Cyprus to work as an interpreter. The chapel was built in his memory and his tomb is located next to the chapel, just in front of the tomb of Apisoghom Utidjian, also from Constantinople (1853-1929), Chief Translator and Interpreter for the British.

Hadjilyra emphasises that the cemetery has a great importance and symbolism to the Armenian-Cypriot community, but it is also a major highlight of Nicosia and should, somehow, be highlighted.

It is worth noting that house located opposite the cemetery, currently fenced-off for safety reasons, belongs to a Turkish-Cypriot woman called Emine. According to historical information, the first General Commissioner of the Cyprus Scouts, Hagop Palamoudian, used to live there.

The house that stands in a good condition at the Chateau Status complex belonged to the Latin Pietroni family, while the adjacent building, which has no roof and currently hosts various receptions, belonged to the Dombourian family, who were Protestant Armenians. 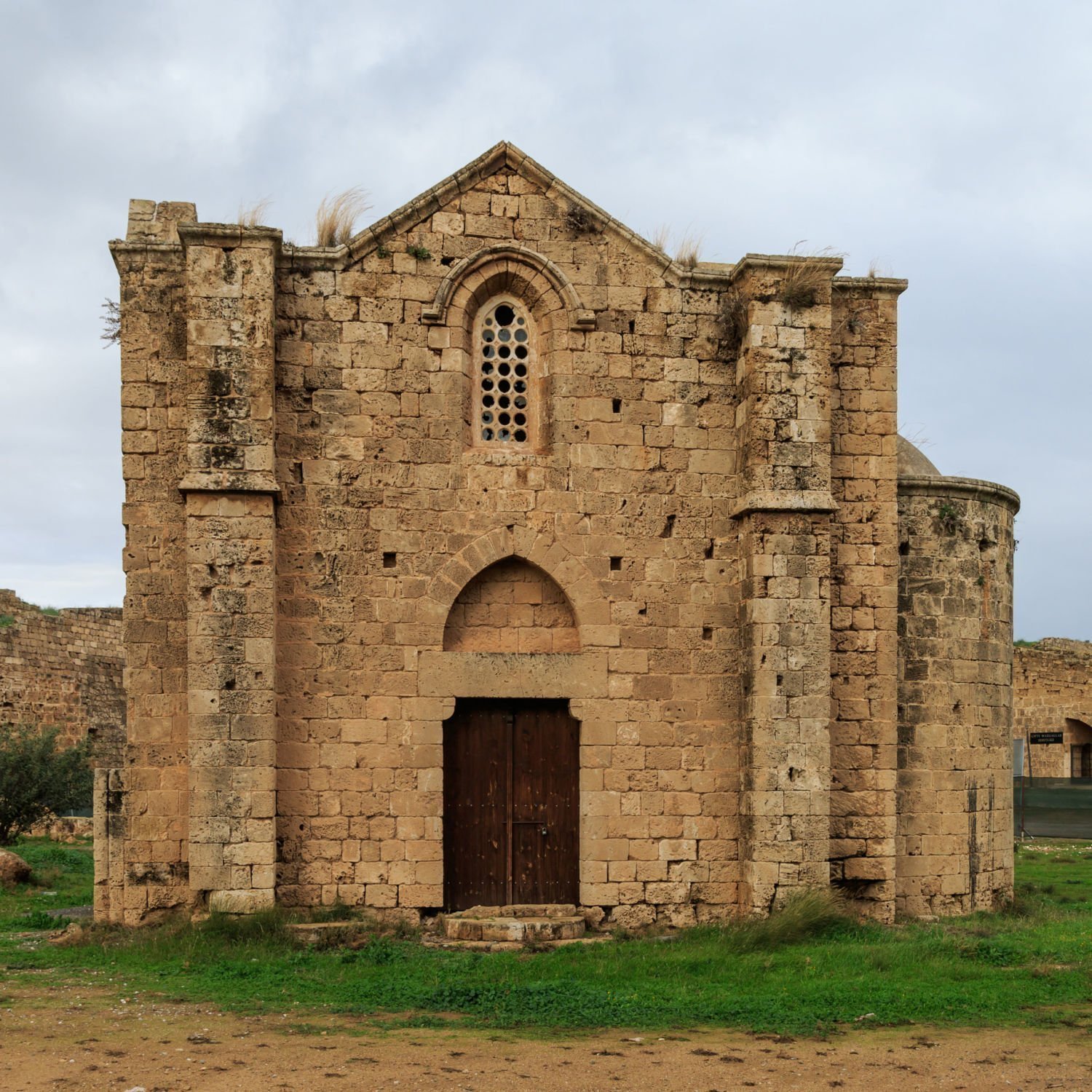 Many people are buried there, infants and babies who were frail and others who had suffered because of the Genocide, he told us. He said that the cemetery and the historical references suggest that the Armenian community of Nicosia is a very old one and that many tombs there are of special significance.

The Armenian MP in the House of Representatives, Vartkes Mahdessian said that “the cemetery is very important, being a reminder that Armenians used to live in Cyprus long before the Armenian Genocide. Our ancestors, many of whom were refugees of the Genocide, are buried there and therefore this is important for us.”

He expressed his gratitude to the Ministry of the Interior for its financial contribution that made the restoration possible and hoped that the site would be included in the Nicosia sightseeing tours. 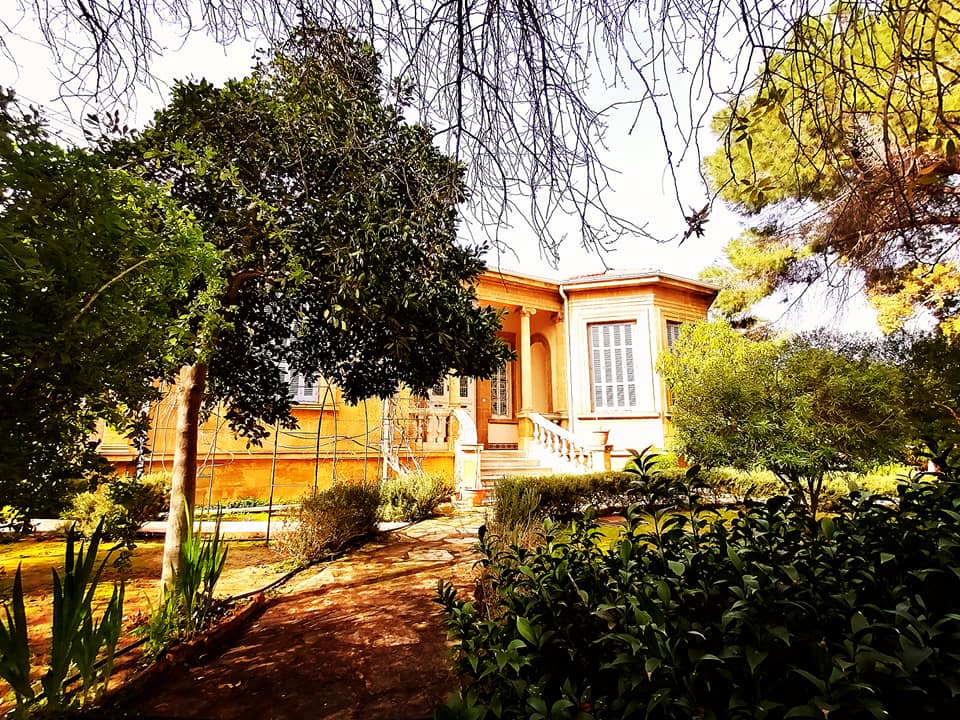 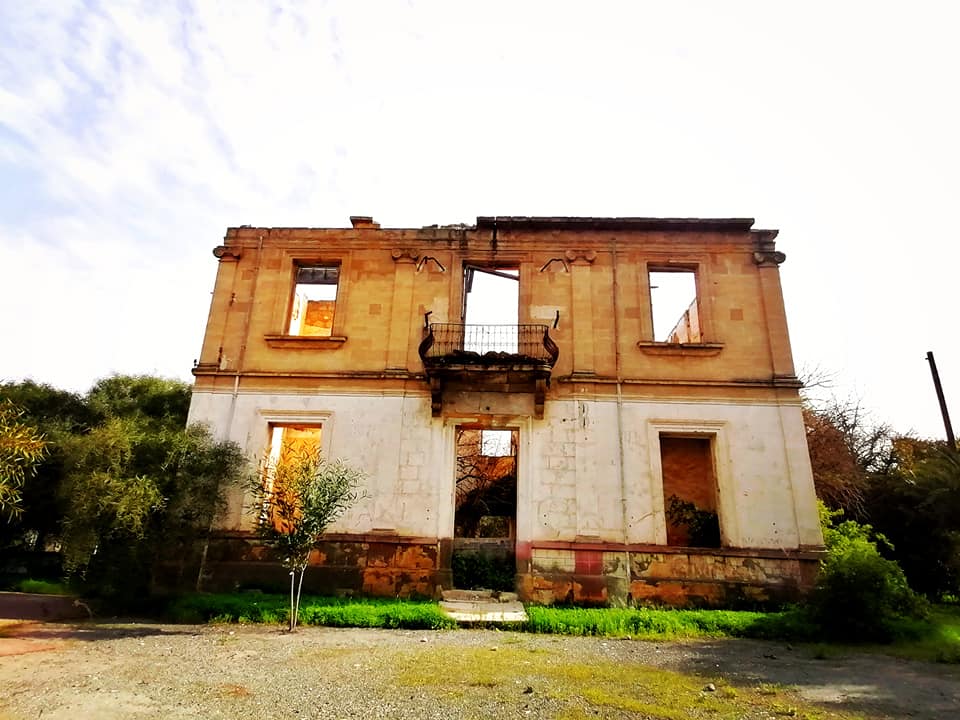 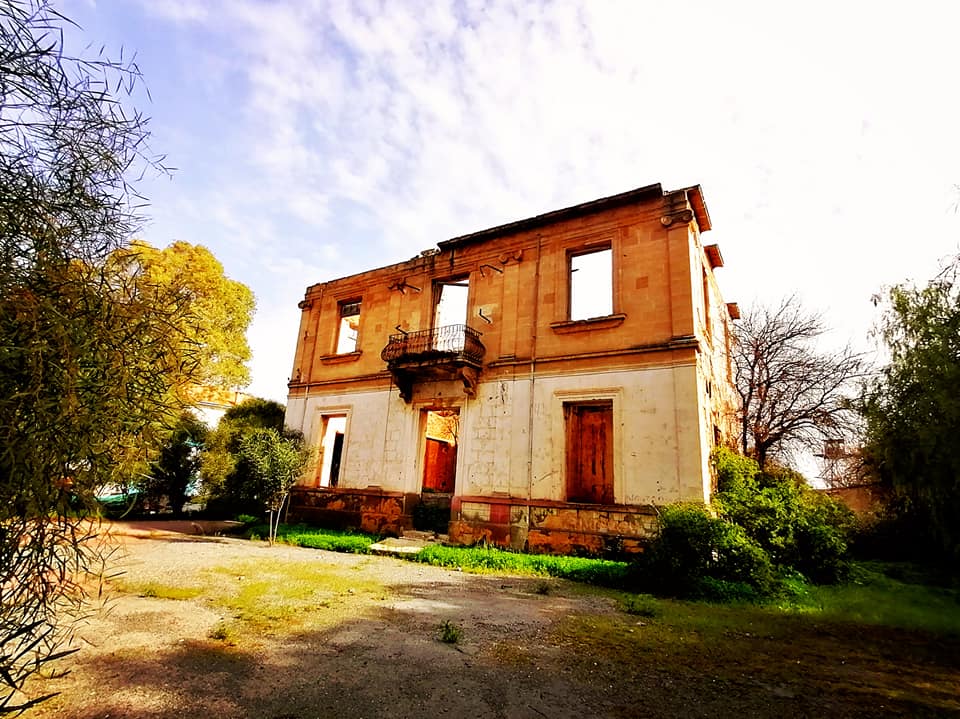