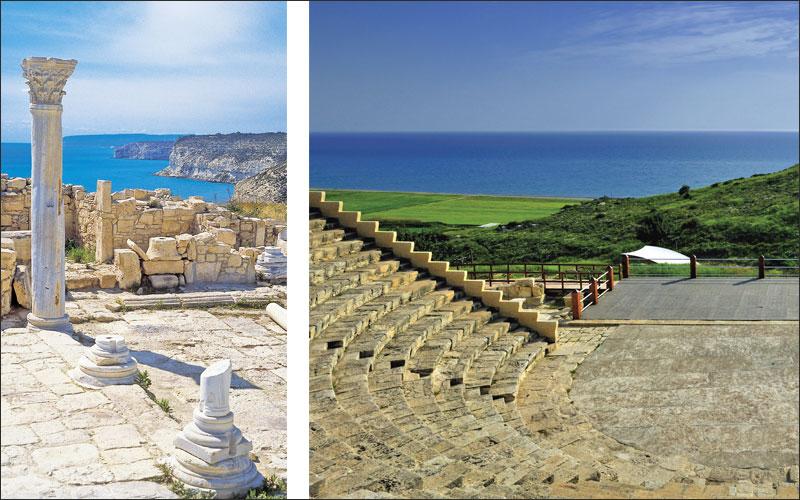 The archaeological remains of Kourion – which was one of the island’s most important city-kingdoms in antiquity – are of the most impressive on the island, and excavations have unearthed many significant finds, which can be viewed at the site.

The city-kingdom was built on the hills of the area, and overlooked and controlled the fertile valley of the river Kouris. According to archaeological finds, evidence suggests that Kourion was associated with the Greek legend of Argos of Peloponnese, and that its inhabitants believed they were descendents of Argean immigrants. The once-flourishing kingdom was eventually destroyed in a severe earthquake in 365 AD.

The magnificent Greco-Roman theatre – the site’s centrepiece – was built in the 2nd century BC and extended in the 2nd century AD. The theatre has been restored, and is now used for open-air musical and theatrical performances – mainly during the summer months – making it one of the most popular settings for high-calibre cultural events.

East of the theatre are the remains of a prominent building, the ‘House of Eustolios’, which was originally a private villa that was turned into a public recreation centre during the Early Christian period.

Whilst the villa was modest in size, it was well equipped and richly adorned. Its remains consist of four panels of beautiful, 5th century mosaic floors in the central room, and a bathing complex that is located on a higher level, accessed by steps, north of the building. A roof structure allows visitors to enjoy the site all year round, and explore its remnants.

The baths themselves originally opened off the central room to the north and east, where there were cold baths (frigidarium). Before each is a shallow foot-bath; while on the west, the remains of the hypocausts – which heated the medium room (tepidarium), and the hot room (caldarium) – can be seen. In the latter, the built-in basins for hot baths have survived, as have the firing chambers, where hot air was carried through the hypocausts, travelling up through specially-cut flues, through the walls, and beneath the terracotta tiles of the floor.

Along with the House of Eustolios, there are further impressive mosaic floors in the ‘House of Achilles’ and the ‘House of the Gladiators’, with the villas named after the scenes depicted on the mosaics.

The remains of the Roman Agora are also visible at the site. The structure dates back to the early 3rd century, with additions made later on, during the Early Christian period. The Roman Agora is built on the remains of an earlier public building, which was in use from the end of the 4th century to the end of Hellenistic period.

The Agora of the city is surrounded by porticos with marble columns on both sides, whilst on its northwest side, is an impressive public bath and a small temple, the Nymphaeum, dedicated to the water nymphs.

An early Christian basilica at the site dates back to the 5th century, with separate baptistery on the external northern side.

The Stadium of Kourion lies 1km to the west, on the right side of the road towards Pafos.