Dijsselbloem gives credit to Cyprus for early exit from memorandum 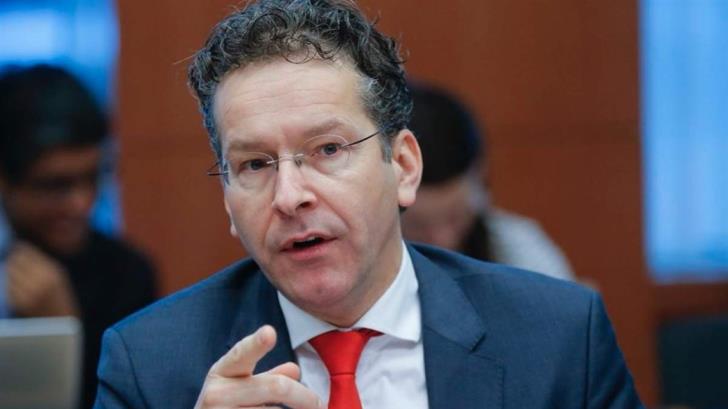 “Unlike Greece, Cyprus came out of the memorandum very early, by implementing effective reforms.” This message was sent out yesterday in Nicosia by former Eurogroup Chairman, Jeroen Dijsselbloem, stressing that Cyprus made the difference. Dijsselbloem was a speaker on the topic “The Eurozone crisis and the future of the European Union” at the event celebrating the 25th anniversary of the Cyprus Centre for European and International Affairs of the University of Nicosia.

Dijsselbloem paid tribute to Finance Minister Haris Georgiadis, stressing that Georgiades played a determining role. “Cyprus is now among the Member States with the highest growth, along with Spain and Portugal. Ireland, another country in a memorandum, leads the race with a 6% growth,” said Dijsselbloem.

The Dutch politician defended the solution of the bail in imposed on the Cypriot financial sector. He said he used this solution in 2013 (while he was Finance Minister) when he nationalized the SNS bank in the Netherlands. “This was a new approach for the Netherlands, since my predecessors saved two big banks with very costly means (bail out). When we had to deal with Cyprus, this solution (bail in) was again my preferred approach, “said Dijsselbloem, stressing that bail ins have now become the model solution in the banking union.

In his speech he stressed that the crisis in Europe lasted a lot longer and made a lot of damage in several countries. According to the Dutch politician, the financial crisis broke out during the introduction of the euro, highlighting the weaknesses of the real economy. Indeed, he stressed that the real estate bubble exploded in Ireland, Spain, the Netherlands and Cyprus. He also pointed out that the European economy was heavily dependent on banks, while the handling of the problem was delayed.

When he took over as the chairman of the Eurogroup, he noted that the debate revolved around who will pay for the damage of the banks: “Governments or investors in banks? By allowing national governments to rescue investors, we have led many countries bankruptcy. And anger was created as the banks and private investors were rescued at the expense of the taxpayer, leaving the people in austerity” was Dijsselbloem’s positioning.

The former Eurogroup chief also said on that the most important issues for the EU are currently not the euro or the economy but security and migration.

“The most important issues for the EU are currently not the euro or the economy, but security and migration,” he said, adding that “these are issues which require European cooperation.” Here, he said, “I think we should take the lead of President Macron. Europeans need to raise their defence spending and work together.”

According to Dijsselbloem, “Germany will have to accept the fact that it is a large country and therefor has an important role to play.”

He spoke on mistakes that were made in the past, noting that “in order to create free movement we took away the inside border controls, without securing the outside borders.”

On the refugee quota mechanism, he expressed the view that “central-European member states will never accept this. And I think we have to accept that reality.” And so, he added, “a smaller group of member states will have to go for enhanced cooperation in migration policy.”

“Migration and security are key issues right now, top of the list for electorates in almost all countries now. It is a key driver of populism,” Dijsselbloem said.

According to him “the position of the US, China and Russia should increase our sense of urgency.  We need a European strategy so the EU is no longer just an economic power but also becomes a political power.”

On the monetary union, his key advice as he said would be “let’s finish what we started”, while “clearing out the remaining legacy issues.”

He called for the completion of the banking union, including a backstop to the resolution fund and a European deposit insurance scheme. He also said that the capital markets union project should also be pushed forward.  “Brexit should increase our sense of urgency on this topic,” he pointed out.

At the same time, he spoke of the need to develop the ESM further.

“Allowing them to step in and support member-states in a situation of an adverse economic shock,” he said, adding that this should be done “of course under the condition of sound policies.”

Dijsselbloem highlighted the fact that “in order to take next steps in strengthening EMU we need trust between member states and in our institutions.”

Trust, he added, that solidarity between us is honed hand in hand with responsibility. “With governments living up to the commitments made to the Eurozone.”

And trust, he continued, “in our common institutions that they will respect what has been agreed and apply it fairly and evenly to all member states, large and small.”

“We cannot build a community without all of us also taking responsibility for the interests of the community as a whole,” he pointed out.

According to the Dutch politician “blaming Europe for the many flaws in our national economies, legal systems or domestic political governance will bring us nothing but a populist backlash.”

“National politicians need to take their responsibilities and that includes sometimes confronting the electorates with the real issues at steak and the difficult choices to be made,” he said.

Dijsselbloem also stressed that “Europe has a major role to play in some issues. Security and migration is certainly one. Dealing with the climate issue is another.”

“Taking the lead in international trade, closing deals around the world, certainly in a time when others don’t,” he said. Stimulating, he added, “research and development, public and private, and drastically increasing European funds in this area, but also off course strengthening the Monetary Union.”

He pointed out that “a lot of work still needs to be done.”

By In Cyprus
Previous articleCyprus energy planning on track, Energy Minister says
Next articleCyprus one of the countries with the cheapest credit card charges