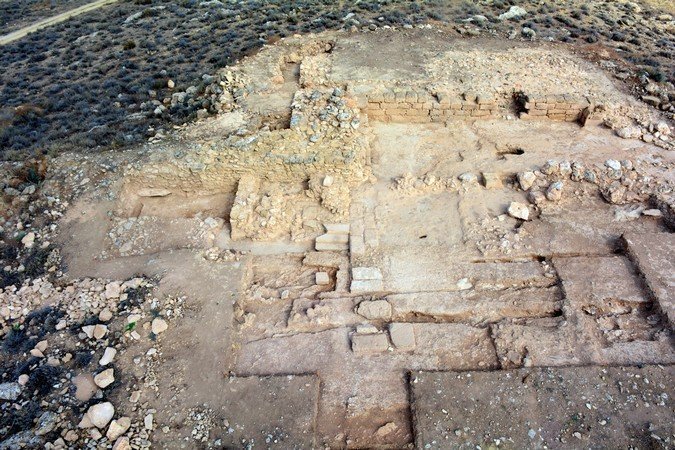 Excavation at both sites was held intermittently as Nikolides is out of reach on certain days when exercises are held by the National Guard. 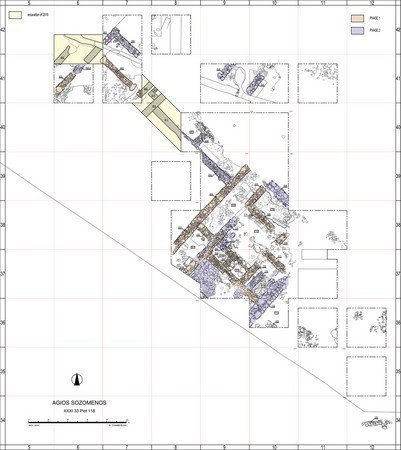 This year, archaeologists focused attention on the access leading to the tower, by extending the excavation area, to investigate whether the staircase of ashlar stones and the platform of ashlars running parallel to it were preserved further to the south.

The platform was made of large ashlars of approximately 1×0,5m although they vary in size. The staircase was not preserved any further but it was clear that the steps led to the top of the tower; only some of them are preserved as well as the lower substructure of stones that supported the staircase.

On the east side, the plaster floor, made above bedrock was traced. A channel, running from an east to west direction (downslope) was made in the floor, its sides smoothed and bridged at two points with flat stones. Another two channels were found running parallel to this one on the north and south, unfortunately not very well preserved. These were also bridged over by the plaster floor at some points and may have functioned as drainage channels. On the west side of the area, a cavity, roughly rectangular, with a square ashlar stone (0,42×0,40×0,18m) in the middle was revealed and close to it, on the south, a circular hearth was found lined with clay and heavily burnt.  Two Plain White sherds were found with traces of a reddish substance on the interior.

As already noted last year, it is clear that the fortress was reconstructed at some point to add the formidable ashlar tower onto the existing circuit wall. The old wall was built of smaller sized zones, placed alternately with flat worked stones, while the new wall added to support the tower was made of large unworked stones, filled in with smaller ones and its faces dressed with ashlars.

The team tried to investigate how the old wall joined the new part on the east side, as the two were not on the same axis; normally there should have been a joint, possibly at an angle to each other. Unfortunately, in this exact spot, a large crevice was bulldozed out, causing a serious disturbance that did not allow  them to determine this issue. In fact, the damage was so great that the wall was denuded of its structure down to bedrock and a huge collapse of large stones was scattered around it and down the slope.  As in previous excavation seasons on the fortress, there is a total lack of finds and only small fragments of ceramics, mainly from small vessels occur. It is to be noted, however, that a bronze arrowhead was found on the surface after the winter rains, outside the excavated area.

Although the damage to the monument proved to be quite disruptive, the architecture and design of the fort are particularly impressive. It is evident that monumentality was a consideration but not the only factor for its construction, as it was further strengthened and embellished, meaning that defence was clearly another fundamental consideration at the time. In addition, both the plan, construction and additions indicate considerable awareness of military tactics and warfare.

Given the scarcity of other such structures in Cyprus, one wonders first whether it could be the product of local expertise or an adaptation of a foreign prototype and second, but obviously not any less significant,  who was the enemy? These are issues that need to be further investigated both by continued excavation in search for more evidence and, in combination with the results from the recent excavations at the Barsak fortress nearby as well as the settlement remains at Djirpoulos and Ampelia.

On the days when the fort on the plateau at Nikolides was inaccessible due to shooting exercises, excavation continued at Djirpoulos.

The first aim was to complete the plan of the building on the NW and SE sides and slowly establish in the long run, whether there was a single complex or separate buildings.

A new wall (802) parallel to 403 was located on the NW side forming a small room or corridor where a clay lekane, a pithos, a large storage jar and charcoal were found. Further excavation in this area revealed the continuation of wall 403. This wall continues to the NE (401) and turns at 90 degrees (400) to form an interior space. Wall 403 is interrupted by the Medieval irrigation channel which continues from NW to SE, already found in 2016.

The channel was lined with gypsum and blocked with an upstanding stone on the eastern side. As the gypsum flooring was not preserved intact, further excavation below revealed the remains of the ancient wall, while wall 802 was also affected by the construction of the channel. On the south of the Medieval channel, the floor of plaster was preserved with a flat stone in situ, possibly used as a grinding surface as well as a sling stone.  On the north side of Wall 802, a clay hearth was located, roughly circular, around which burnt cooking ware, an upturned lekane, pithos fragments and a stone grinder were found as well as ashes and charcoal. Most interestingly, a small copper nodule with silver plating preserved on its surface was also found in the water sieved contents of the soil sample from the hearth.

A long wall (811), most probably the extension of Wall 203, was located, thus joining this year’s excavation to the rest of the building found in 2016. A floor of compact earth was revealed on the north side of Wall 811 with traces of fire. Charcoal, a small piece of slag and a fragmentary wall bracket indicate perhaps both domestic and workshop activities. This floor possibly dates to phase 2.  On the south side of Wall 811 large storage jar and pithos sherds with wavy ridges, fragments of cooking jars and basins were noted and on the floor, which was only partially preserved, a flat circular ceramic object, possibly a slow wheel was found.

Walls 803 and 804, parallel to each other, possibly repeat the architectural plan of the building found in 2016 with long narrow rooms or corridors on the NW part of the building. The upper layer, below the thick deposit of greenish clay representing erosion and abandonment, consisted of  compact earth mixed with plaster, possibly the collapse of the roof and/walls. Below, a layer of stones, possibly represents the collapse of the lower part of the walls and on their removal, a floor of plaster was revealed extending towards the stone channel noted in 2016. The plaster floor belongs to the earlier phase of the building as the wall built on top (803) indicates.

Two new walls forming the corner of an interior space (814, 815) possibly also belonging to the older phase were found in the space between 803 and 804. On the south side of these walls, stone grinders, large sherds of pithos, cooking ware fragments and charcoal were retrieved. Some White Slip I sherds and small fragments of Mycenaean vessels were found above the plaster floor.  Close to the stone channel a small irregular cavity in the floor contained ochre, some small animal bones and fragments of White Slip bowls.  On the exterior of wall 804, below the thick greenish erosion deposit, some reddish clay and unfired ceramic fragments confirm the function of the buildings as workshops and domestic installations, as already noted in 2016.