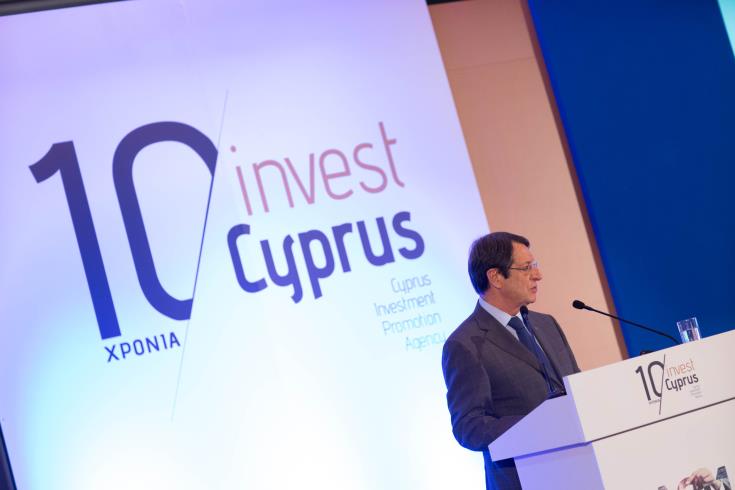 Cyprus had to implement difficult and costly decisions that have put the economy on a positive path, President of the Republic Nicos Anastasiades has said, noting that red tape remains one of the country’s greatest problem.

Addressing the Invest Cyprus (Cyprus Investment Promotion Agency) Annual General Meeting, Anastasiades recalled that five years after the 2013 economic crisis, Cyprus is back on a positive track with economic growth in the region of 4%, registers fiscal surpluses, brought unemployment down to 7%, while the economy`s credit rating returned to invest-grade status.

“To achieve these results, we had to implement bold decisions, many of which had a high political cost, which we did not weigh,” the President said.

He recalled that Cyprus had to rationalise public expenditure, adopt tax incentives to foster growth and to attract investments but acknowledged we have not been successful in reducing red tape, despite the implementation of structural reforms.

“Red tape constitutes one of our country’s greatest disadvantage. I hope the political powers will understand that leaps are necessary and that we need to reform the public service in an effective way,” Anastasiades added.

Furthermore, he pointed out that no one would expect that Cyprus would exit the crisis of the magnitude of 2013 in a way that no wounds would remain open.

“We are focusing on addressing problems of vulnerable groups of the population with additional social welfare measures for the fairer distribution of growth, achieved through the cooperation of public and private sector,” he said.

“The government’s efforts in the last six years, prudent economic governance, putting the banking sector on a healthier footing and attracting investments were the key elements that turned the economy to growth,” he said, adding that notable investments with added value were the instrumental for the return to economic growth.

On his part, Angelos Gregoriades, President of the Cyprus Investment Funds Association, said Cyprus has the capacity to operate as an attractive base for investment funds and fund managers.

Referring to the investment funds sector, Gregoriades said in the last years investment funds in Cyprus have increased by 70% while funds under management reached €5.7 billion marking an increase of 90%.

By In Cyprus
Previous articleReport: Man detained for 45 days for case punishable with a fine
Next articlePenelope to bring some rain and storms to Cyprus

The US Food and Drug Administration approved Johnson & Johnson’s single-shot Covid-19 vaccine for emergency use, beginning the rollout of millions of doses of...
Read more
Local

A man who entered the premises of the Cyprus Broadcasting Corporation yesterday, shouting abuse at journalists over 'El Diablo' (The Devil), the song selected...
Read more
Local

A seventy one year old man in Limassol is in custody following the discovery of videos and photos of children and minors sexual abuse...
Read more

A man who entered the premises of the Cyprus Broadcasting Corporation yesterday, shouting abuse at journalists over 'El Diablo' (The Devil), the song selected...
Read more
Local

A seventy one year old man in Limassol is in custody following the discovery of videos and photos of children and minors sexual abuse...
Read more
Local

No deaths for a third day running and 243 new cases were recorded in Cyprus today, a drop in number in comparison to yesterday's...
Read more