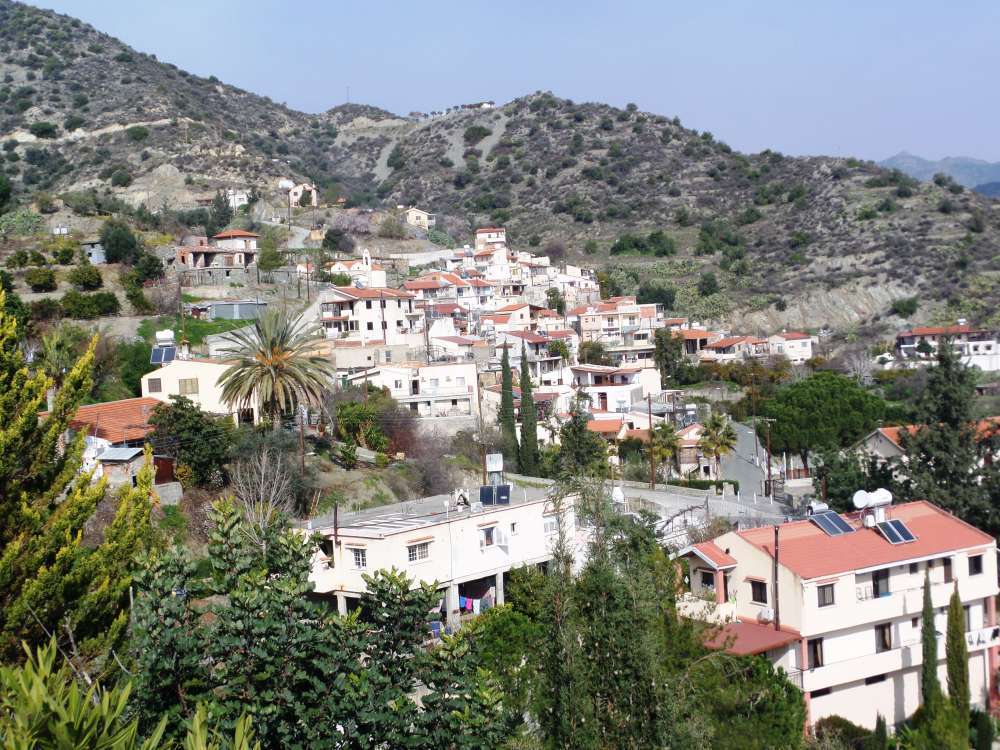 Dierona is a pure Greek village in the district of Limassol and, more specifically, in the geographical region of Pitsilia. It is located approximately 20 km northeast of Limassol next to Arakapas, which is at a distance of approximately 1 km to the south. It is connected to Arakapas through an asphalt road as well as to the main street of Nicosia – Limassol via Germasogeia.

Dierona is situated on a semi-mountainous region to the right of the river Germasogeias at an average altitude of 460 meters above sea level. Its main soils are of immature silicon formed on igneous rocks, mainly serpentines, fords, granite and anchovy. It annually rains there with a rainfall of about 600 millimeters. Citrus is mainly cultivated in the village, while Dierona as well as the neighboring Arakapas are well known for mandarins production. Few olives and forage are also cultivated, while some carob and almond trees are grown in the village area. Stock raising is very limited in the village since only few goats and a small number of poultry are being raised. Furthermore “Pitsilia Integrated Rural Development Project” incorporates providence regarding Dierona village, which has already benefited by the project; improved rural roads, terraces, drilling, reservoir and irrigation of approximately 400 acres of land. In 1984 earthen dam was erected within the village.

Village’s main church is dedicated to the Archangel Michael. He had also being worshiped in another abandoned large church located outside the village, for which we do not have any information regarding its building year. Gagnon notes that, before 1936, he had seen icons of the abandoned church in the new one.

It is claimed that Dierona was one of the feuds belonging to the Knights Templar during the Frankish Administration. After the dissolution of Knights Templar order the village came under the possession of the Knights Hospitallers order. Within the same period the village was known as Ierona (sanctuary) and is marked on the map of Kitchener. On the Mas Latri (1862) map one can see the current settlement called Pano Ierona along with an indication of 500 residents, while at the same time one can also see Kato Ierona in the southwest, which is more likely to be just toponym and not the second settlement. Besides, the census tables refer to the total population of Pano and Kato Dierona in just one case (1881) during the British Administration. In another case (census 1931) it is mentioned as Dierona and Madres. However it seems that there were not two separate settlements; although Pano and Kato Dierona were administratively placed in Episkopis’ nachie (apartment), during the census of 1881 they are presented as one village on the population table. Also, on the households table there totally were 58 residential and 3 uninhabited houses. It seems that the names Pano and Kato Dierona were referring to the village’s neighborhoods, as it is customary for the mountainous villages of Cyprus to be separated in two neighborhoods.

Church:
The Chapel of Prophet Elias