Dialogue between government and foreign investors to be institutionalised, President says 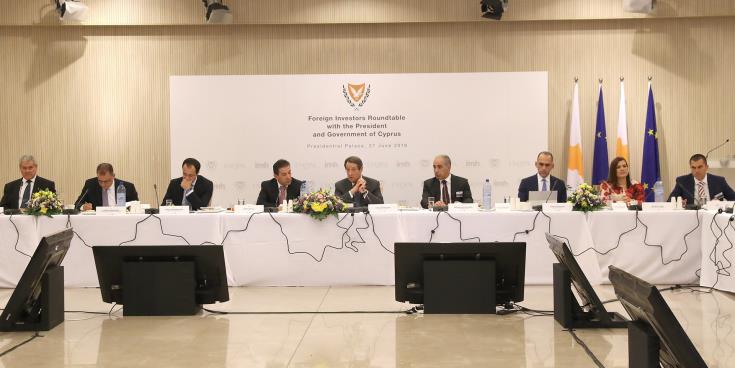 President Nicos Anastasiades announced on Thursday that a consultative dialogue between the government and foreign investors will be institutionalised, expressing the belief that the inventiveness of the private sector and its significant contribution to the economic recovery of Cyprus, as well as establishing synergies between the private and public sector, can reinforce the position of Cyprus as a stable and competitive destination for doing business.

The President was addressing a roundtable meeting with foreign investors, which took place at the Presidential Palace, with the participation of the Ministers of Foreign Affairs, Economy and Energy, the Government Spokesman and the Deputy Ministers of Shipping and Tourism.

“We look forward to hearing and evaluating your assessments as to ways which would improve the general business and entrepreneurial environment, the competitiveness and the ease of doing business in Cyprus, particularly in the very important sectors which you represent, such as finance, communication technology, energy, real estate and leisure, shipping, trading and infrastructure,” Anastasiades told foreign investors.

He said that this event offers the opportunity to convey the government’s sincere gratitude “for your vote of confidence, positive contribution and strong support in our economy, either through direct investments or by establishing regional and international headquarters on the island.”

However, what is most important is the fact that this event constitutes a significant pillar of our whole framework of actions on maintaining and broadening the conditions under which high growth rates can be generated, he added.

Anastasiades noted that it was paramount, amongst others, to “ensure that every investor trusts the economic environment in which he operates, through maintaining a stable, transparent, credible and competitive tax and legal regime, adopt measures, including structural reforms, which facilitate economic and investment opportunities and receive suggestions on issues which relate to the above-mentioned, as well as on further advancing the competitiveness of our country.”

He went on to say that “the aforesaid forms part of our principle that it is only through a constructive dialogue, an exchange of views and ideas with all social partners, and in particular with highly – successful foreign investors and private companies, that we will be able to adopt new policies or measures which will reinforce the outlook and prospect of our economic environment.”

“This is all the more applicable in your case, since you do not only have a first-hand experience of Cyprus’ economic and business environment, but it is also through your initiatives and your multi-million investments that you have proved to be one of the most important components of the economic recovery, the growth and the job creation we are witnessing,” Anastasiades added.

He stressed that “our consultative dialogue will be institutionalised, including adding foreign investors who are active in other sectors of our economy, since I truly believe that the inventiveness of the private sector and its significant contribution to the economic recovery of Cyprus, as well as establishing synergies between the private and public sector, can reinforce the position of Cyprus as a stable and competitive destination for doing business.”

Anastasiades said that he was looking forward to a productive exchange of views and the identification of new policies, measures and investment initiatives that would enhance competitiveness, development and sustainable growth in Cyprus, noting that “we are here to listen and to be heard.”

“We are investing in your wisdom, in your initiatives”, he added , noting that “we shall have the chance to listen from you, the creators, what it is that we can do more for those who are the main actors in achieving the progress that has been created so far.”

By In Cyprus
Previous articleEurostat: Half of trips by Cyprus residents within country
Next article“The worst is still to come”: sizzling Europe battles wildfires, health risks