Despite ‘wonderful’ meeting, Trump and Erdogan fail to resolve conflicts 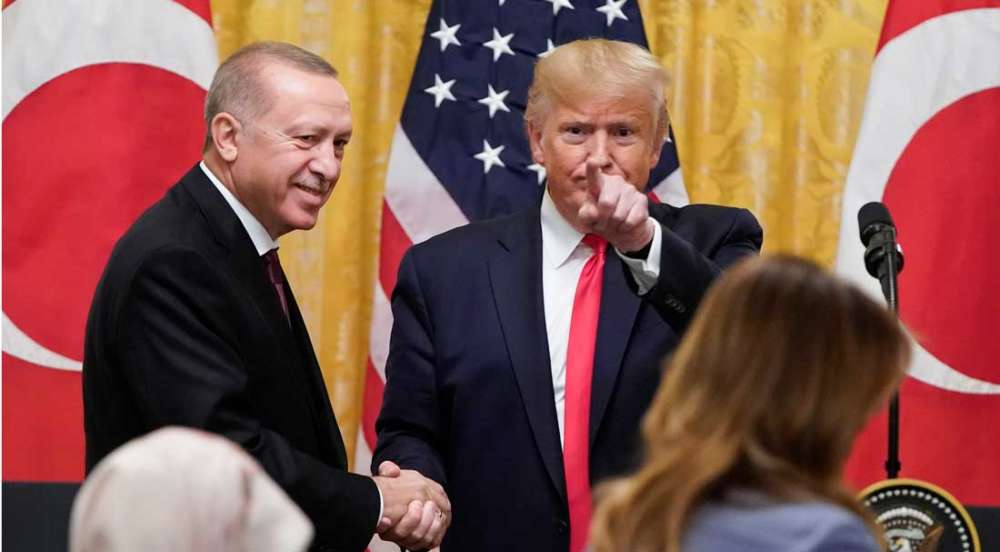 U.S. President Donald Trump on Wednesday pushed Turkish President Tayyip Erdogan to walk away from the purchase of a Russian missile defense system, calling it a “very serious challenge” to bilateral ties, even though he described a meeting between the two leaders as “wonderful.”

After the much anticipated meeting at the White House to address a crisis in relations, Trump said he was “a great fan” of the Turkish leader and that they had a “productive” encounter.

But both leaders fell short of explaining in concrete terms how they would overcome the mounting differences they have on numerous issues, from Erdogan’s incursion in Syria against America’s Kurdish allies to Turkey’s purchase of the Russian S-400 missile defense system.

“Turkey’s acquisition of sophisticated Russian military equipment, such as the S-400, creates some very serious challenges for us and we are talking about it constantly,” Trump told a joint news conference.

“We talked about it today, we’re talking about it in the future, hopefully we’ll be able to resolve that situation.”

Minutes after their news conference, the White House released a statement using firmer language than the two leaders, who boast of having a warm personal relationship while their governments are largely on icy terms.

“In order to achieve progress on other fronts, it is vital that we resolve the issues involving Turkey’s purchase of the Russian S-400 air defense system, strengthening our defense partnership,” it said.

Washington says Ankara’s purchase of the Russian system is not compatible with NATO defenses and also poses a threat to the F-35 ‘stealth’ fighter jet Lockheed Martin is developing. It is concerned that Turkey, a bulwark against the Soviet Union during the Cold War, is deepening ties with Moscow at the expense of its partnership with the United States.

Turkey had shrugged off threats of U.S. sanctions and began receiving its first S-400 deliveries in July. To punish Turkey, the United States has banned sales of F-35s to the country and removed it from a multinational program to produce the warplane.

On Wednesday, both leaders said they will work to resolve the issue, without saying how. “We’ve asked our secretary of state and minister of foreign affairs and our respective national security advisers to immediately work on resolving the S-400 issue,” Trump said.

Erdogan said the two countries could only overcome the dispute through dialogue. “We are in agreement to further Turkish-American ties on a healthy ground. We have agreed to open a new page in our relationship,” he said.

Despite the tensions on policy issues, Trump gave a warm welcome to Erdogan. It was in sharp contrast to anger in the U.S. Congress over Ankara’s offensive into Syria to drive out a Kurdish militia that has been Washington’s main partner in the fight against Islamic State.

“We’ve been friends for a long time, almost from Day 1. We understand each others’ country. We understand where we are coming from,” Trump told Erdogan as they sat next to each other in the Oval Office. “They’re highly respected in their country and in the region,” Trump said of Erdogan and his wife, Emine.

Trump has come under intense pressure from his fellow Republicans for withdrawing U.S. troops from the area and clearing the way for Turkey’s incursion. On Wednesday, Erdogan said Turkey was the best partner for the United States to help fight Islamic State.

“Turkey and the United States can work together to finish Islamic State and bring peace to Syria. The most reliable U.S. partner in the region to do this is Turkey,” Erdogan said.

At a speech later in Washington, Erdogan said he asked Trump to cease support for the Kurdish YPG militia, who are seen as hostile by Ankara but form the backbone of the SDF, the main U.S. partner in Syria fighting against Islamic State. He did not say how Trump responded.

A day ago, both senior administration officials and a State Department official in separate briefings told reporters that Washington had no intention of ending its partnership with the SDF.

Trump brought in five Republican senators to the White House to speak with Erdogan about the Syrian Kurds and the delivery of S-400s. Following the meeting, Lindsey Graham, a Republican senator close to Trump and who advocated imposing sanctions on Turkey over its incursion, said the discussion at the White House with Erdogan was “candid and frank.”

“I’m hoping to salvage this relationship, but only time will tell if that is possible,” Graham said in a statement.

Erdogan was critical of the U.S. Congress, particularly of a House of Representatives vote last month in favor of a non-binding resolution recognizing the killings of 1.5 million Armenians a century ago as a genocide, a symbolic but historic vote denounced by Turkey.

At his speech later, he called the House resolution as “shameful” and “against historical realities.”

By In Cyprus
Previous articleMogherini: EU is standing united in solidarity with Cyprus
Next articleRevised provisions lead to a rising number of rejected naturalisation applications