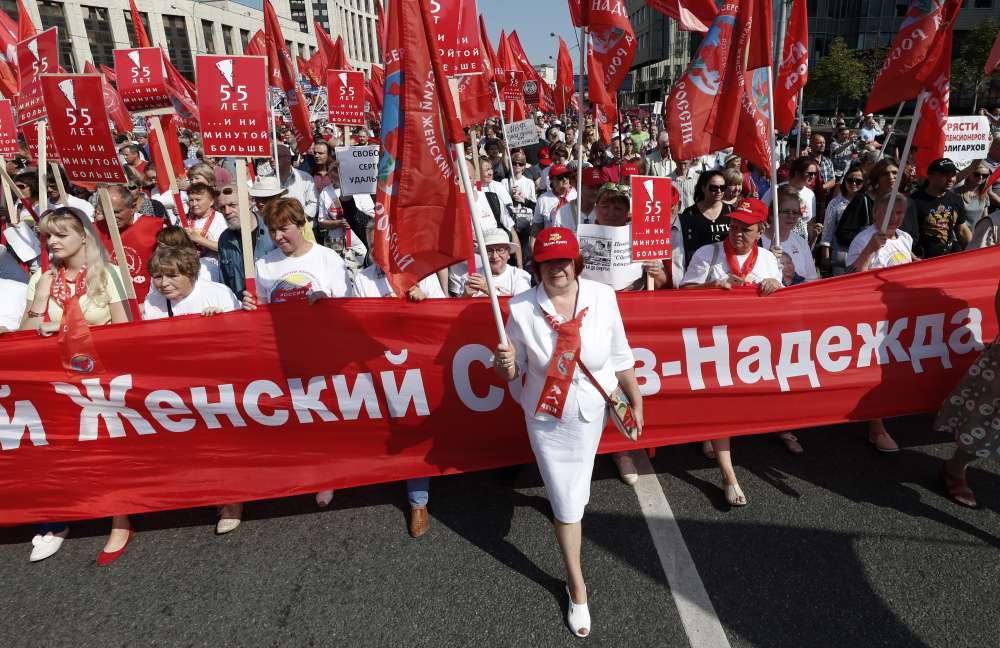 Thousands of people across Russia joined protests on Sunday against government plans to raise the pension age, despite recent promises by President Vladimir Putin to soften the unpopular measure.

Sunday’s protests show that the proposed policy remains a politically sensitive issue for the government despite concessions offered by Putin in a televised address on Wednesday.

During the speech, Putin took personal responsibility for the reform for the first time and described it as a financial necessity. He ended his address by asking the Russian people for their understanding.

Around 9,000 people gathered just a couple of kilometres from the Kremlin, according to White Counter, an NGO that counts participants at rallies, but Moscow police put the numbers at 6,000.

Many carried the red flags and banners of the principal organiser of the protest, the KPRF Communist Party.

A large banner reading “We do not trust United Russia”, Putin’s ruling party, was held up by the crowd and featured a drawing of a red fist punching the white polar bear logo of Putin’s party.

He went on to list his party’s proposals for raising money for the state budget, focused on taxing Russia’s so-called oligarchs, instead of raising the retirement age.

Speakers also voiced their support for the party’s candidate in the Moscow mayoral election, which will be held on Sept. 9.

A separate gathering in the city, organised by the Just Russia party, attracted a further 1,500 people protesting against the pension reforms, Moscow police said.

In his address on Wednesday, Putin watered down the original draft pension reform legislation, introduced by the government on June 14, which opinion polls showed was opposed by 90 percent of Russians and which has provoked a string of protests in recent weeks.

Polls by the Levada Centre show Putin’s personal approval rating has fallen around 10 percentage points since the pension reforms were proposed, although it still stands at around 70 percent.

Putin, who was re-elected in March, offered to cut the proposed retirement age for women to 60, from a retirement age of 63 first proposed by the government. Russian women currently retire at 55.

Putin said that the proposal to raise the pension age for men from 60 to 65 would remain unchanged.

Raising the retirement age would allow the government to pay out bigger pensions, Putin said, describing their current size as modest. The government says the average monthly pension will be 14,414 roubles ($212) by the end of the year, compared with 13,339 in July, as calculated by the Federal Statistics Service.

Last year, a government provision set the average cost of living for pensioners at 8,496 roubles.

In St Petersburg, the Fontanka newspaper said that around 1,500 people gathered to protest, while the Interfax News Agency said 1,200 joined a protest in Novosibirsk and 250 in Vladivostok.

In Yekaterinburg in the Ural mountains, around 450 people took part in a demonstration entitled the “Regiment of Shame”, during which protesters held portraits of politicians who have voiced their support for pension reform, local newspaper Nasha Gazeta said.

In Russia’s south, there were protests in the Black Sea port of Novorossiisk, Astrakhan, Rostov-on-Don and in the capitals of the Caucasus republics of Karachay-Cherkessia and Kabardino-Balkaria, according to Interfax.

People also took to the streets in the town of Simferopol in Crimea, the Black Sea peninsula annexed by Russia from Ukraine in 2014, Interfax added.

Another series of protests, this time organised by Russian opposition leader Alexei Navalny, is due to take place on Sept. 9. Navalny was jailed for 30 days on Monday for breaking protest laws, a move he said was aimed at stopping him from leading the scheduled rally against pension reform.

By In Cyprus
Previous articleIndia’s President arrives for official visit to Cyprus.
Next articleNew yellow alert as heat wave to continue on Monday