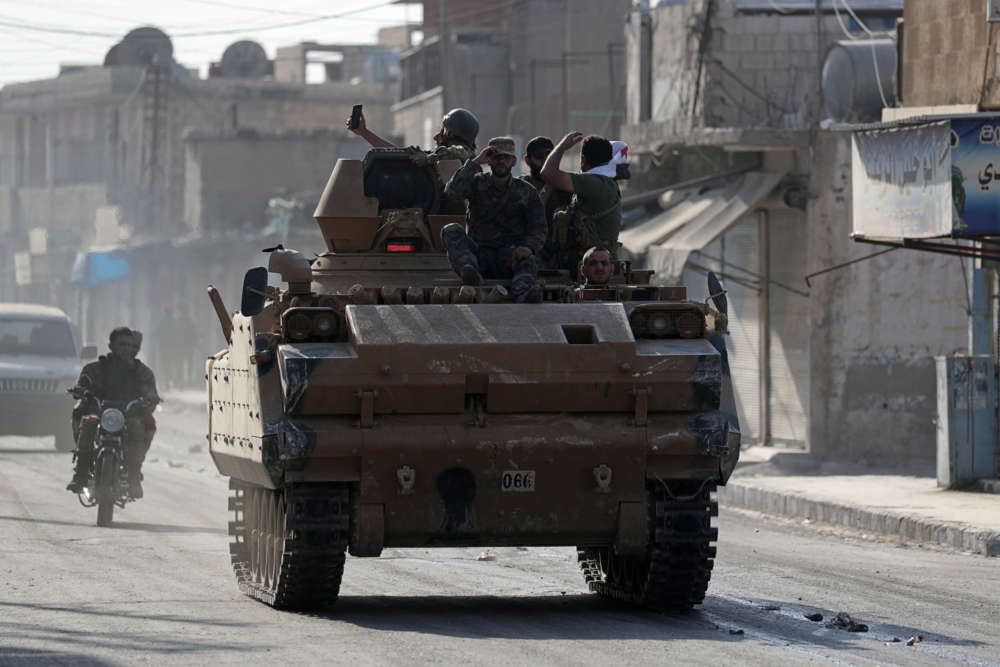 The U.S.-led NATO alliance has resolved to maintain military support for its ally Turkey despite anger over its operation in Syria and its ensuing border deal with Russia, five senior diplomats said.

Spain had threatened to withdraw its Patriot missiles from Turkey in protest at Turkey‘s cross-border offensive that NATO allies say risked jeopardising the fight against Islamic State militants but which Ankara said was to fight terrorism.

At a NATO defence ministers meeting on Thursday, the first high-level alliance meeting since President Tayyip Erdogan launched his operation in Syria on Oct. 9, Spain’s Margarita Robles said Madrid would not withdraw. It would offer Ankara another six-month extension of the batteries, if requested.

The shift was part of a change in tone that underscores how, despite alarm at Turkey‘s behaviour in Syria, NATO is determined to keep Turkey close, diplomats said.

In NATO’s inner sanctum, the North Atlantic Council, Turkey‘s Hulusi Akar maintained a defiant tone on Thursday evening, maintaining his country had the same right to strike deals with Russia as it did with the United States. Yet only a small group of countries led by France were fiercely critical.

“There’s a concerted effort not to make things worse,” one NATO diplomat told Reuters. “Turkey, after (U.S. President Donald) Trump, has put a renewed strain on the alliance. But Turkey is too important to lose.”

Host to U.S. nuclear warheads at its Incirlik air base and with the second-largest military in the alliance, Turkey gives the alliance a strategic presence, notably on the Black and Mediterranean seas.

NATO is also seeking an image of unity when it holds a summit in London on Dec. 4 to celebrate 70 years since its founding in Washington, hoping to shore up confidence shaken by Trump’s portrayal of the alliance in crisis, diplomats said.

Once seen by some as a Cold War relic until Russia’s 2014 annexation of Crimea, NATO needs Turkey on side as it confronts militant attacks in Europe and seeks to defend against the threat of ballistic missiles from Iran to North Korea.

NATO Secretary-General Jens Stoltenberg said the alliance had overcome differences in the past, notably during the U.S.-led Iraq War in 2003, which France and Germany opposed.

“It’s not the first time we have different views in NATO,” he told reporters.

Still, Ankara’s offensive against Kurdish forces, which once fought along side the United States against Islamic State, and an ensuing deal with Russian President Vladimir Putin to patrol northern Syria, brought to a head a host of disputes.

“KEEPING THE FAMILY TOGETHER”

A purge of Western-educated Turkish military officers after a 2016 coup attempt, Ankara’s purchase of a Russian air-defence system and authoritarianism under Erdogan mean Turkey would not meet alliance’s membership standards if joining today.

Erdogan’s comments in September that it was unacceptable for Turkey not to have its own nuclear weapons also made allied diplomats uneasy. Turkey has signed two treaties that ban all nuclear detonations for any purpose.

U.S. Secretary of Defense Mark Esper told the amphitheatre-like North Atlantic Council chamber that Turkey‘s operation was “unwarranted” and the latest sign that the Ankara was heading in the wrong direction.

However, in its 1949 founding treaty, NATO has no mechanism to expel an allied member. Turkey joined NATO in 1952. Some allied diplomats have lamented privately there is nothing that allows a suspension or sanctions against an offending member.

There is also a degree of confidence in the alliance that Russia, which Western leaders accuse of a covert campaign to destabilise the West, could never offer Turkey the kind of collective security guarantees that NATO can.

Ultimately, allies agree that Turkey is crucial to the alliance, given its strategic position between Europe and Asia.