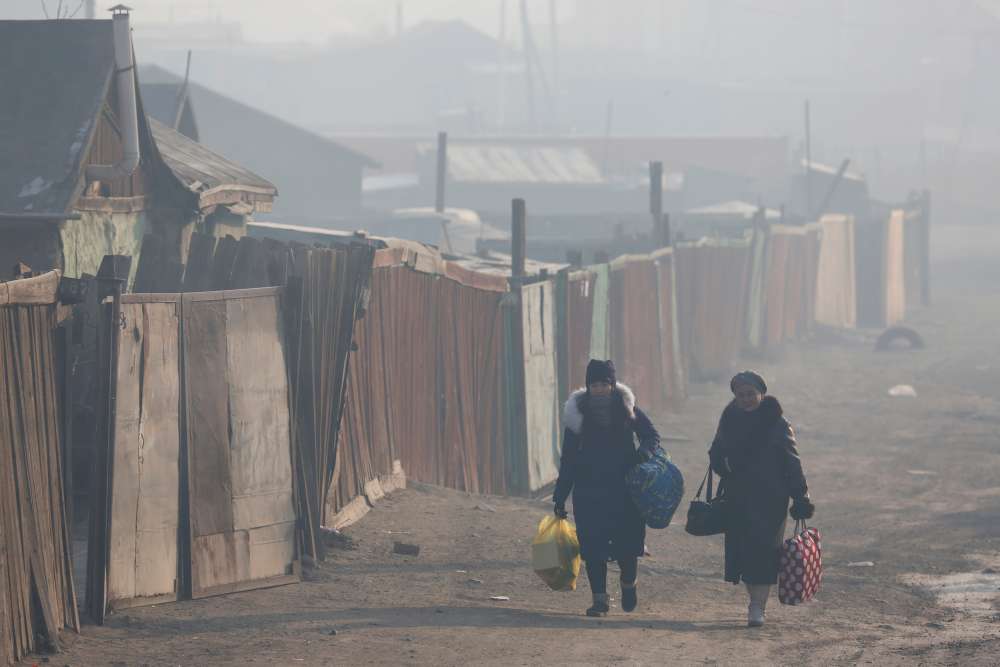 Mongolia has extended school winter holidays in the world’s coldest capital and many families have sent children to live with relatives in the vast, windswept grasslands to escape choking smog and respiratory diseases such as pneumonia.

The temperature is expected to drop to minus 32 degrees Celsius (minus 26F) in Ulaanbaatar on Monday night, as residents burn coal and trash to try to keep warm and concentrations of smog particles known as PM2.5 routinely exceed 500 mg per cubic metre, 50 times the level considered safe by the WHO.

Mongolia, a former Soviet satellite landlocked between Russia and China, has invested public money and foreign aid to tackle pollution, but improvement has been slow, with residents saying inaction has been compounded by a corruption scandal that has paralysed parliament.

In a crowded township more than 40 miles from Ulaanbaatar, Jantsandulam Bold’s five grandchildren are breathing more easily after fleeing the capital.

“Fresh air and sun are most important for kids to grow healthy and robust,” says Jantsandulam, 57, making milk tea for her grandchildren in her home, a thickly padded felt hut known as a “ger”, or in Russian, a “yurt”.

“This little one had flu when he came here but the fresh air has treated him well,” she said, pointing at her five-year-old grandson.

The children are nearing the end of a two-month break, with schools due to reopen next Monday.

About 60 percent of Mongolia is covered by grassland, where the mining of copper, gold, coal and other minerals provides employment, while the Gobi desert envelops the South. But almost half the population live in Ulaanbataar.

Reuters calculations based on U.S. Embassy data show annual average PM2.5 concentrations hit 100 micrograms in Ulaanbaatar in 2018. They soared to 270 in December. PM2.5 in China’s most polluted city of Shijiazhuang stood at an average 70 micrograms last year, down 15.7 percent from 2017. The World Health Organisation recommends a concentration of no more than 10 micrograms.

The WHO said 80 percent of Ulaanbaatar’s smog was caused by coal burning in “ger” districts, where thousands of rural migrants, used to a nomadic lifestyle, have pitched huts. It estimates air pollution causes more than 4,000 premature deaths a year.

A joint study by the U.N. International Children’s Emergency Fund (UNICEF) and Mongolia‘s National Centre for Public Health said children living in one smog-prone district of Ulaanbaatar had 40 percent less lung function than those living in the countryside.

“Air pollution aggravates respiratory diseases and children under five are most vulnerable as their organs are still not mature,” said Bolormaa Bumbaa, a doctor at Bayangol District’s Children’s hospital in Ulaanbaatar.

Families have already set up a pressure group known as Moms and Dads Against Smog, but after the protests they organised in Ulaanbaatar were ignored, the group decided to focus on encouraging residents to take action to protect themselves, said Mandakhjargal Tumur, a group coordinator.

“I don’t believe the government will do enough to reduce pollution in coming years,” she said. “That’s why we are now focusing on raising awareness.”

At the Bayangol hospital, Ulzii-Orshikh Otgon, 34, was forced to bring her 10-month-old daughter Achmaa in with pneumonia for the second time in a month.

“I believe it’s because of the pollution,” she said, adding that home air purifiers did little to help.

“Just by opening the door, our home fills with smog,” she said while breastfeeding Achmaa in the waiting room.

Doctors advised her to take her children out of Ulaanbaatar but she has no relatives in the countryside and rent is expensive.

“Decision makers have said for years they are fighting pollution,” she said. “They just wasted billions of tugriks on useless stoves and processed coal, which don’t change anything.”