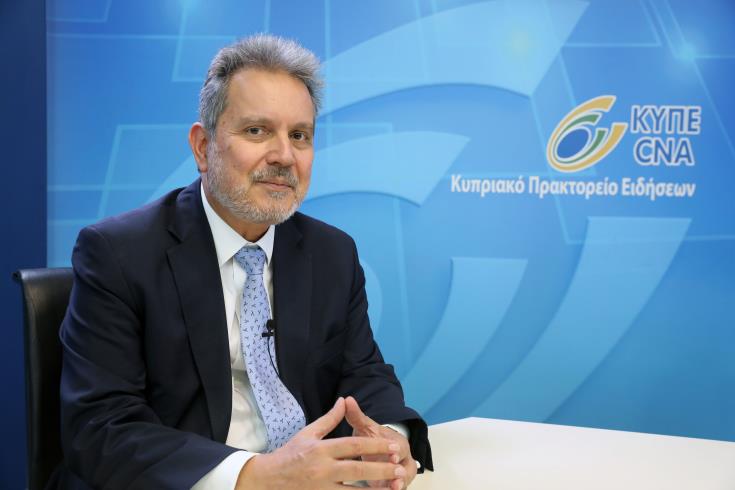 If the Turkish side changes the status of Varosha, then it will be extremely difficult, if not impossible, to reach a Cyprus settlement, the Ambassador of Greece to Cyprus, Theocharis Lalakos, has told the Cyprus News Agency (CNA), just before leaving his post in Nicosia to undertake his new duties at the Foreign Ministry in Athens.

In an interview with CNA, Lalakos said that the latest Turkish actions in Varosha have gone much too far, noting that there was a very clear reaction by the international community, which denounced and deplored them.

Asked if the Turkish side’s attempts to open part of the fenced off city of Famagusta can be prevented or reversed, the Greek Ambassador said that he considers that this could be achieved. However, in order to do so, “the international community must maintain its firm position, opposing any change in the status of the fenced off area of Famagusta, in the way Turkey seeks to achieve this,” he added.

Lalakos said that this position of the international community “is something that we achieved through a lot of hard work. Nicosia worked for it, but also Athens helped very much, with the international contacts we had throughout this time. This is an issue on which we continue to focus our attention. It is necessary to constantly remind this pending issue and we will see if the Turkish side decides to freeze its plans,” he noted.

Αsked if it is possible for Turkey to proceed with the illegal annexation of the occupied areas of Cyprus, Lalakos said that even though we must not rule out anything beforehand, as regards Turkey’s behaviour towards Cyprus, his assessment at this stage is that instead of annexation, Turkey would pursue an arrangement that would result in the international recognition of the “Turkish Cypriot entity” while enabling Ankara to exert as much as possible control over the entire Republic of Cyprus, “with everything that this entails, not only for the national interests of Cyprus or Greece, but also for the position of Cyprus and the functioning of the EU.”

He went on to say that this is something “that we continue pointing out to our European and other interlocutors.”

Referring to efforts to solve the problem of Cyprus, Lalakos underlined that a change of the basis on which previous negotiating efforts took place, as the Turkish side demands, cannot be accepted.

Lalakos stressed that Greece wants Cyprus to become a normal state without guarantors and without occupation troops. Furthermore, he stressed that Turkish occupation troops which are currently on the island must leave within a fixed timetable. “This is not something that can be left for review after 10 or 15 years. It must be agreed upon and concluded within a reasonable period of time,” he noted.

The Ambassador stressed that the Cyprus problem is a national issue which is on the top of Greece’s agenda, and stressed that Greece is the country which supports more than any other in the world the independence of the Republic of Cyprus.

He underlined that the Cyprus problem will continue to be Greece’s first priority “until we manage to have a just, viable and functional settlement.”

Lalakos noted that during the last years the Turkish side insists on pursuing a settlement outside the framework that has been agreed with a great deal of effort, within the framework of the UN process, both at the Security Council and with High Level Agreements between the leaders of the two sides.

The Greek Ambassador said that the Turkish side – Ankara and the Turkish Cypriot side – openly question the work that has been done, comprising the basis on which any new negotiating effort began up until now. “And we saw this happening in an explicit way during the informal five-party meeting in Geneva,” he added.

Lalakos said that we haven’t seen a change in the Turkish stance since then, noting that both Nicosia and Athens have not altered their insistence either not to accept a change of the negotiating basis.

He noted that Turkish moves as regards Varosha have gone much too far, and that the brutal and provocative violation by Turkey of what has been agreed caused the clear reaction of the international community, the UN and the EU and almost all countries, which denounced and deplored these efforts.

Lalakos expressed the conviction that all international players realize that a change in the status of Varosha would make the settlement of the Cyprus problem extremely difficult, if not impossible, because it changes any balance that there may be at the negotiations, in a dramatic way, and therefore it will be extremely difficult to have a final agreement.

The Greek Ambassador said that his country would prefer the system of guarantees to be abolished, and to have another protection system with a view to address any security concerns of both communities on the island, that will not include anachronistic treaties of guarantee and will not provide the right of unilateral intervention to any party.

Lalakos also stressed that no occupation troops can be stationed in a reunified Cyprus.

He noted that Athens and Nicosia are in constant coordination, with meetings that take place regularly at the highest level and which were not interrupted despite the COVID-19 pandemic, and the restrictions. He assured that this will continue.

Lalakos said that Greece is interested in having a relation with Turkey based on the respect of the international law and the Treaties that have been signed which are not perfect for Greece, but must be respected.

“We want dialogue (with Turkey), but we will never make concessions as regards our sovereign rights and the major national issues, including the Cyprus problem,” he underlined.

The Greek Ambassador said that a solution to the Cyprus problem would certainly improve the relations between Greece and Turkey, however problems will not cease to exist and must be solved in order to have normal relations with Turkey.

Asked about the issue of possible migration flows from Afghanistan, the Greek Ambassador said that Greece and Cyprus already host a lot of migrants and refugees and must be prepared to address any new flows. Preparations have begun with close coordination between the two countries and also in the EU framework, he noted.

Moreover, he stressed that the two countries share a common approach as to how to address their energy needs in the Eastern Mediterranean basin, in cooperation with other countries which respect the international rules.

He highlighted the pivotal position which the two countries have as regards major energy plans in the region, the connection of electrical grids and plans for natural gas pipelines, as the East Med.

Asked about the trilateral schemes of cooperation which Cyprus and Greece have established with countries in the region, the Greek Ambassador referred to the 3+1 scheme (partnership among Cyprus, Greece and Israel with the participation of the US in certain meetings), noting that it “has not progressed to the extent that we would like to, but it is progressing and covers a lot of fields in which some years ago we could not have imagined that we would cooperate at a regional level.”

He added that the US interest signifies the broader interests of third countries in these trilateral cooperation schemes, noting that if they were not successful, at least to a certain extent, surely they wouldn’t have attracted this interest.

Lalakos noted that what is important at this phase is to proceed with developing these schemes and broaden the fields of cooperation in a realistic way, in a way that will yield results.

He went on to say that these schemes are not short-term projects and are not based on the personal relations between leaders, but reflect the common interests of the countries involved, something proven by the fact that cooperation proceeds irrespective of the government in power in each country.

Asked about cooperation in extinguishing forest fires that broke out during the summer, the Greek Ambassador thanked the Cyprus Fire Service and Civil Defence Department for their contribution in fighting the recent devastating fires in Greece.

Moreover, he stressed that cooperation in the field of fire-fighting must have a regional and international dimension, and noted that one of the actions that will be taken will be to set up bases for fire-fighting aircraft, helicopters and other equipment in various countries, for joint efforts whenever this is necessary.

Replying to a question about the bilateral relations between Cyprus and Greece, the Greek Ambassador highlighted the very close cooperation between the two countries, noting that there is room for improvement as regards financial exchanges, trade and tourism. Moreover, he referred to the effort which is underway with a view to revive the ferry service between Cyprus and Greece.

Cyprus has been divided since 1974, when Turkish troops invaded and occupied 37% of its territory. Numerous UN-backed talks to reunite the island have failed to yield results. A 5+1 Informal Meeting that took place in Geneva, on April 27-29, failed to find enough common ground to allow for the resumption of formal negotiations in relation to the settlement of the Cyprus problem.