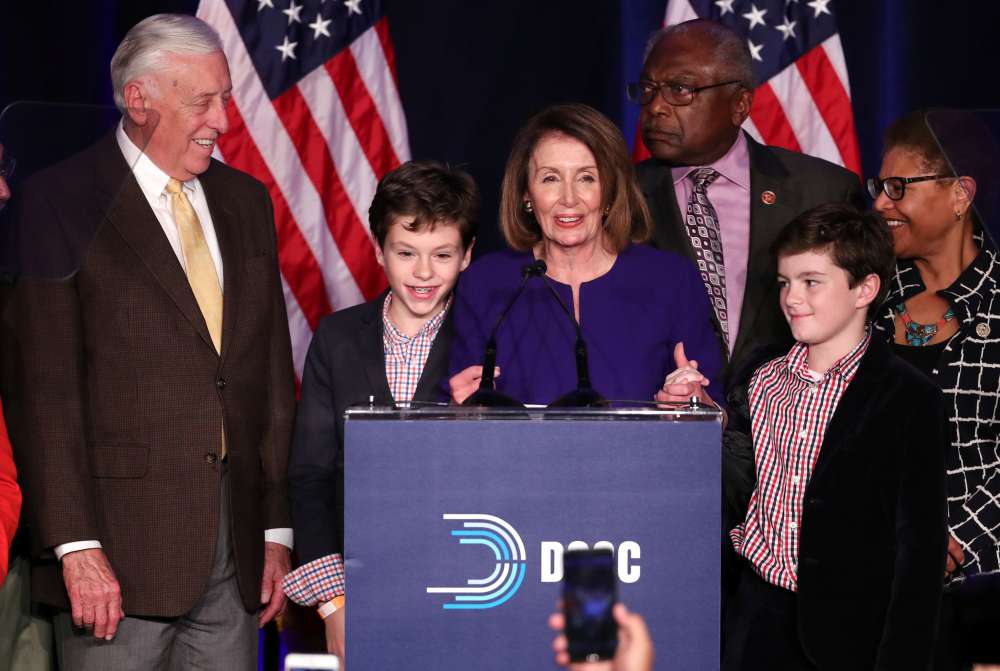 Democrats are poised to regain control of the House of Representatives in the US midterm elections, a momentous win that will enable them to block much of Donald Trump’s agenda and hold him accountable with investigations.

The election was described by analysts as a referendum on the direction of America.

Democrats needed to flip 23 seats to take control of the House of Representatives, and looked set to surpass the 218 needed to win back the chamber from Republicans, breaking one-party rule in Congress after eight years.

Speaking in Washington, senior Democrat Nancy Pelosi said the party would use its newly won House majority to pursue a bipartisan agenda.

“Thanks to you tomorrow will be a new day in America,” she said.

Earlier in the evening, the White House spokeswoman, Sarah Sanders, sought to downplay Democratic gains, saying: “Maybe you get a ripple, but I certainly don’t think that there’s a blue wave.”

But Democrats racked up upsets across the country. Incumbent Randy Hultgren lost a traditionally Republican suburban district to Lauren Underwood, a 31-year-old African American nurse who ran a campaign focused on healthcare. Military veteran Max Rose pulled off an upset in a conservative district on Staten Island in New York, and the deep red state of Oklahoma elected Democrat Kendra Horn to a district centered around Oklahoma City.

Elsewhere, Democrats Sharice Davids and Deb Haaland made history by becoming the first Native American women elected to Congress and Alexandria Ocasio-Cortez of New York became the first woman in her 20s to win a seat and was joined by 29-year-old Abby Finkenauer in Iowa.

#US #Midterms2018 | First two Muslim women elected to US Congress

However, Republican control of the Senate will allow it to block House-passed Democratic initiatives on everything from healthcare to the potential repeal of tax cuts. And while Democratic results in the House showed signs of being the forecast “blue wave”, there were also disappointing losses in the Senate and the failure to win key governor’s offices in states like Florida and Ohio.

The elections carry significant ramifications for what remains of Trump’s first term.

With a majority in the House, Democrats are expected to launch a flurry of investigations into the president and his administration. The White House’s legal team is reportedly bracing for potential inquiries that include whether Trump obstructed justice in the Russia investigation, the misuse of taxpayer dollars by several cabinet officials, and hush money paid to women to keep silent about their alleged affairs with Trump before he was elected president.

The Democratic victory would also stonewall much of Trump’s agenda. Republicans have vowed to pursue further tax cuts and changes to popular government programs, such as Medicare, Medicaid and social security. They have also pledged to repeal and replace Barack Obama’s healthcare law, should they remain in power.

The increased Republican majority in the Senate, however, will make it easier for Trump to continue to appoint judges and remake the nation’s judiciary branch in a more conservative mold.