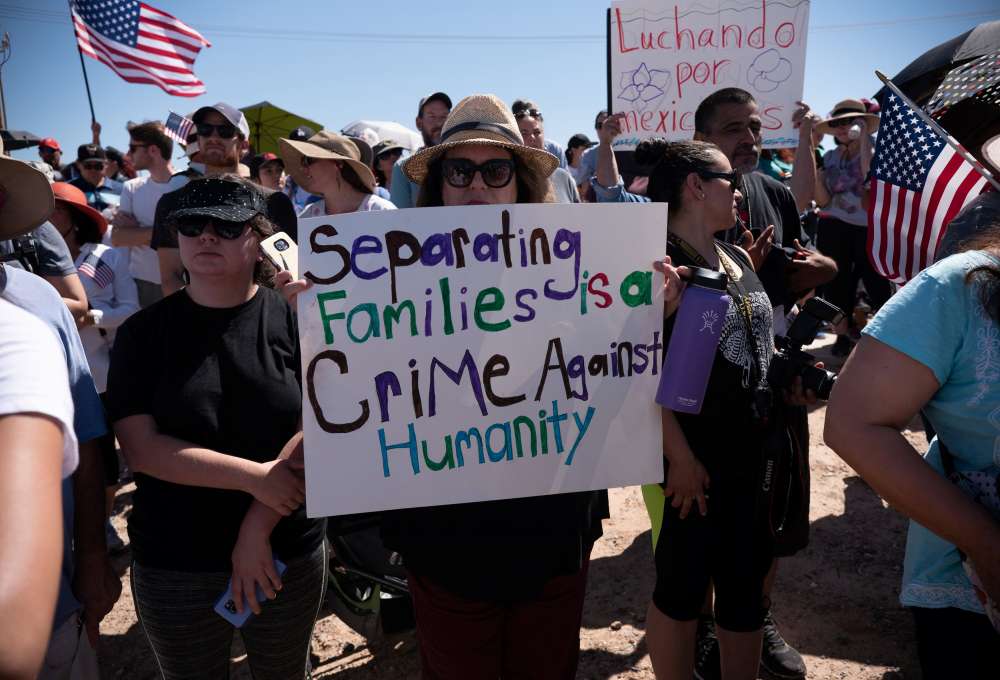 Democratic lawmakers joined protesters outside immigration detention facilities in New Jersey and Texas on Sunday for Father’s Day demonstrations against the Trump administration’s practice of separating children from their parents at the US-Mexico border.

“This must not be who we are as a nation,” said Representative Jerrold Nadler, one of seven members of Congress from New York and New Jersey who met with five detainees inside a facility in Elizabeth, New Jersey, including three who said they had young relatives removed from their care after seeking asylum at the border.

The events came as news stories highlighting the family separations intensified political pressure on the White House, even from some of President Donald Trump‘s fellow Republicans.

US officials said on Friday that nearly 2,000 children were separated from adults at the border between mid-April and the end of May.

In May, US Attorney General Jeff Sessions announced a “zero tolerance” policy in which all those apprehended entering the United States illegally, including those seeking asylum, would be criminally charged, which generally leads to children being separated from their parents.

Administration officials have defended the tactic as necessary to secure the border and suggested it would act as a deterrent to illegal immigration.

But the policy has drawn condemnation from medical professionals, religious leaders and immigration activists, who warn that some children could suffer lasting psychological trauma. The children are held in government facilities, released to adult sponsors or placed in temporary foster care.

In South Texas on Sunday, several Democratic lawmakers, including Senator Jeff Merkley, visited a Border Patrol Processing Center in McAllen to call attention to the policy, while Representative Beto O’Rourke, who is running for the US Senate in Texas, led a protest march to a temporary detention facility for immigrant children set up near El Paso.

O’Rourke told the demonstrators they had to bear the burden of “what we now know to be happening.”

“I want that burden to be so uncomfortable for so many of us that it forces us to act, it places the public pressure on those in positions of public trust and power to do the right thing for our country,” O’Rourke, who is seeking to unseat Republican Senator Ted Cruz, said to applause.

Some moderate Republicans have also called on Trump to stop the separations. Senators Susan Collins and Jeff Flake wrote to White House officials on Saturday seeking more information on the policy.

“It is inconsistent with our American values to separate these children from their parents,” Collins said on CBS’ “Face the Nation” on Sunday.

Trump has sought to blame Democrats, saying their support for passage of a broader immigration bill would end the separations.

White House adviser Kellyanne Conway said on NBC’s “Meet the Press” on Sunday: “As a mother, as a Catholic, as somebody who has got a conscience. … I will tell you that nobody likes this policy.”

“You saw the president (say) on camera that he wants this to end,” she added.

A spokeswoman for Melania Trump told CNN on Sunday that the first lady “hates to see children separated from their families” and hopes lawmakers from both parties can agree on immigration reform.

In an opinion piece in the Washington Post, former first lady Laura Bush, wife of the previous Republican president, George W. Bush, said she lives in a border state and appreciates the need to enforce and protect the U.S. borders.

“But this zero-tolerance policy is cruel. It is immoral. And it breaks my heart,” Bush wrote, adding the images were “eerily reminiscent of the Japanese American internment camps of World War II, now considered to have been one of the most shameful episodes in U.S. history.”

Democrats have accused the president of effectively turning the children into political hostages to secure stricter immigration measures, such as funding for a U.S.-Mexico border wall.

“Stop lying to the American people. This is your policy,” Democratic U.S. Representative Hakeem Jeffries said in New Jersey.

Democrats in the U.S. House of Representatives will introduce legislation this week aimed at stopping separations, mirroring a similar Senate bill sponsored by Democrat Dianne Feinstein. But neither bill has much hope of securing enough support in the Republican-controlled Congress, let alone surviving Trump‘s veto pen.

Roy Garcia, 43, attended the New Jersey protest with his wife, Linda, and their sons, 8-year-old Julian and 11-year-old Sebastian.

“It’s hard for me to enjoy Father’s Day knowing what’s happening to other children and families,” he said. “It’s heartbreaking.

By In Cyprus
Previous articleA big win, but did it shake the earth?
Next articleCeramics Exhibition