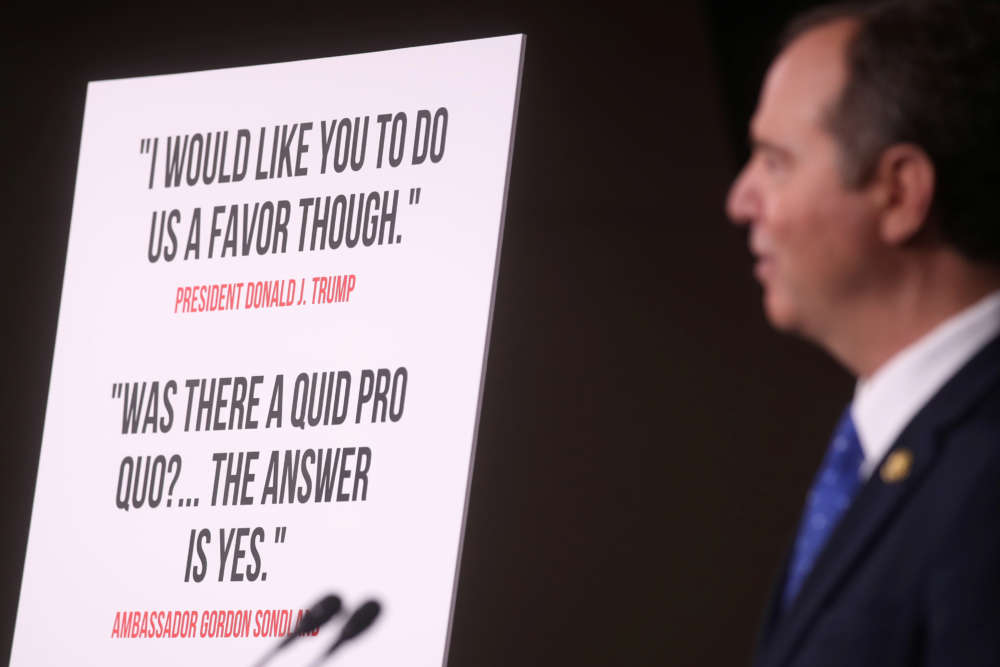 U.S. President Donald Trump solicited foreign interference to boost his re-election chances, undermined national security and ordered an “unprecedented” campaign to obstruct Congress, Democrats said on Tuesday in a report that lawmakers will use as the basis of any formal impeachment charges.

In the 300-page report, Democrats leading the House of Representatives Intelligence Committee leveled allegations of sweeping abuse of power by Trump, saying he used U.S. military aid and the prospect of a White House visit to pressure Ukrainian President Volodymyr Zelenskiy to undertake investigations that would benefit Trump politically.

Republican Trump, who will stand for re-election in November 2020, denies any wrongdoing and calls the inquiry a hoax.

The heart of the impeachment probe is whether Trump misused the power of his office to pressure Ukraine to investigate the son of former Vice President Joe Biden, a leading contender for the Democratic nomination to face Trump in the 2020 election.

The public release of the report is a milestone in a weeks-long investigation into whether Trump should be removed from office over his dealings on Ukraine. It summarizes hours of private testimony and televised hearings in which former government officials described a months-long effort to pressure Ukraine to carry out the investigations sought by Trump in July.

The report’s completions hands the process over to the House Judiciary Committee, which will now be responsible for drafting actual articles of impeachment should lawmakers decide to move forward. That panel will begin proceedings on Wednesday.

In the report, Democrats detail accusations that Trump obstructed their investigation, including refusing to provide documents and testimony from his top advisers, unsuccessful attempts to block career government officials from testifying and intimidation of witnesses.

The Democrats argue that “damage … will be long-lasting and potentially irrevocable if the President’s ability to stonewall Congress goes unchecked.”

Making their case to move forward with impeachment, the report said that “any future President will feel empowered to resist an investigation into their own wrongdoing, malfeasance, or corruption, and the result will be a nation at far greater risk of all three.”

In a news conference, House Intelligence Committee Chairman Adam Schiff described Trump as a “president who believes that he is beyond indictment, beyond impeachment, beyond any form of accountability and indeed above the law.”

Trump, who is in London for a NATO summit, repeated accusations that Democrats are using the impeachment process to engage in a politcally-motivated attack seeking to undo the results of the 2016 presidential election by removing him from office. Opinion polls show Americans are bitterly divided over impeachment.

White House spokeswoman Stephanie Grisham said Democrats had conducted a “one-sided sham process” that had failed to produce any evidence of wrongdoing by Trump.

“This report reflects nothing more than their frustrations. Chairman Schiff’s report reads like the ramblings of a basement blogger straining to prove something when there is evidence of nothing,” Grisham said in a statement.

Lawmakers and the public have heard testimony from current and former officials that military aid was withheld from Ukraine and that a White House meeting with Zelenskiy was conditioned on Kiev announcing a probe into Biden, as well as one into a debunked conspiracy theory about Ukrainian interference in the 2016 U.S. election.

The report was approved by the intelligence panel on a partisan vote on Tuesday evening. The vote was 13-9. It was not immediately clear how each member voted.

If the full House eventually votes to approve formal impeachment charges, a trial would be held in the Republican-led U.S. Senate, where a two-thirds majority of those present would be required to convict Trump and remove him from office.

The report suggested wrongdoing within the executive branch extended beyond Trump.

The report said many of Trump’s “closest subordinates and advisors,” including White House acting Chief of Staff Mick Mulvaney, Secretary of State Mike Pompeo and Secretary of Energy Rick Perry aided Trump’s efforts to pressure Ukraine and withheld information from Congress. Senior administration officials declined to testify in the proceedings.

The phone records were obtained from AT&T, the report says.

An AT&T statement acknowledged the company complied with a request.

“Like all companies, we are required by law to provide information to government and law enforcement agencies,” the statement said. “In all cases, we ensure that requests for assistance are valid and that we act in compliance with the law.”

A spokesman for Nunes did not respond to a request for comment.

The report also sought to push back at a frequent defence of trump by Republican lawmakers – that the political novice was simply doing what all presidents do.

“The President’s misconduct was not an isolated occurrence, nor was it the product of a naïve president,” the report argues.

Republicans, in an advance rebuttal report released on Monday, said Democrats had not established that Trump had committed an impeachable offence.

Trump and other Republicans have suggested that Biden and his son Hunter Biden, who was on the board of a Ukrainian energy company, should be investigated for corruption. The Bidens have denied wrongdoing.