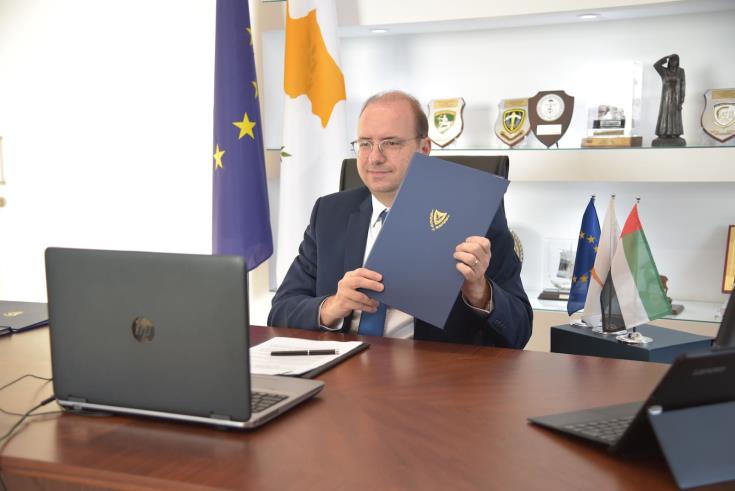 Enhancing our relations with Gulf states, which are developed militarily and have significant capabilities and defence equipment, is among our priorities, Cyprus Minister of Defence Charalampos Petrides has told CNA, noting at the same time that more prospects are opening up for regional cooperation following the recent cooperation between the United Arab Emirates (UAE) and Israel.

At the same time, Petrides assured that apart from a defence and military cooperation with the UAE, the Ministry of Defence is working in the direction of similar cooperation agreements with other Gulf states, with mutual military and diplomatic benefits and a common goal, which as he underlines is for “the Eastern Mediterranean to become a maritime region of peace, stability and prosperity for everyone.”

The Minister of Defence, who was asked by CNA to say what cooperation agreements are expected apart from the one with the UAE, said that “enhancing and expanding defence and military alliances has multiple benefits for the Republic of Cyprus on a diplomatic, security, defence and interstate relations level.”

“We seek a long-term cooperation in areas of common interest with neighbouring countries and European and other friendly countries who show an interest in developments in the Eastern Mediterranean,” he noted.

In this context, Petrides added, “enhancing our relations with Gulf states, countries which are developed militarily and have significant capabilities and defence equipment, is within our priorities.”

He referred to the signature on January 12, of a memorandum of defence and military cooperation with the UAE, which confirmed “our excellent bilateral relations.”

“This was a particularly important development, as it is the first cooperation memorandum between the two countries in the area of defence and security,” he pointed out.

Petrides added that the agreement provides for joint exercises, training programmes and consultations, promoting the operational cooperation between the two countries’ armed forces.

He also said that the UAE are interested in the Eastern Mediterranean and have excellent relations with other partners of Cyprus such as Greece, France and Egypt, adding that following the recent agreement between UAE and Israel “even more prospects for regional cooperation arise.”

The Defence Minister noted that in future we can expect to see exercises and activities with the participation of forces both countries and added that “at the same time we are working in order to have similar cooperation with other Gulf states, with mutual military and diplomatic benefits.”

“Our common goal is for the Eastern Mediterranean to become a maritime region of peace, stability and prosperity for everyone,” he stressed.
Petrides also said that a revised military agreement with France signed in Paris in 2017 which has been in force since last August “serves the same goals.”

“Defence cooperation with France is particularly important for the Republic of Cyprus,” he stressed, adding that what has been agreed is been implemented gradually and he gave the examples of joint exercises and training of Armed Forces personnel.

Asked about steps to upgrade the military infrastructure of Cyprus, Petrides said that preparatory work had taken place which was slowed down due to the pandemic, but expressed his belief that “we will make up for lost time.”
(CNA)