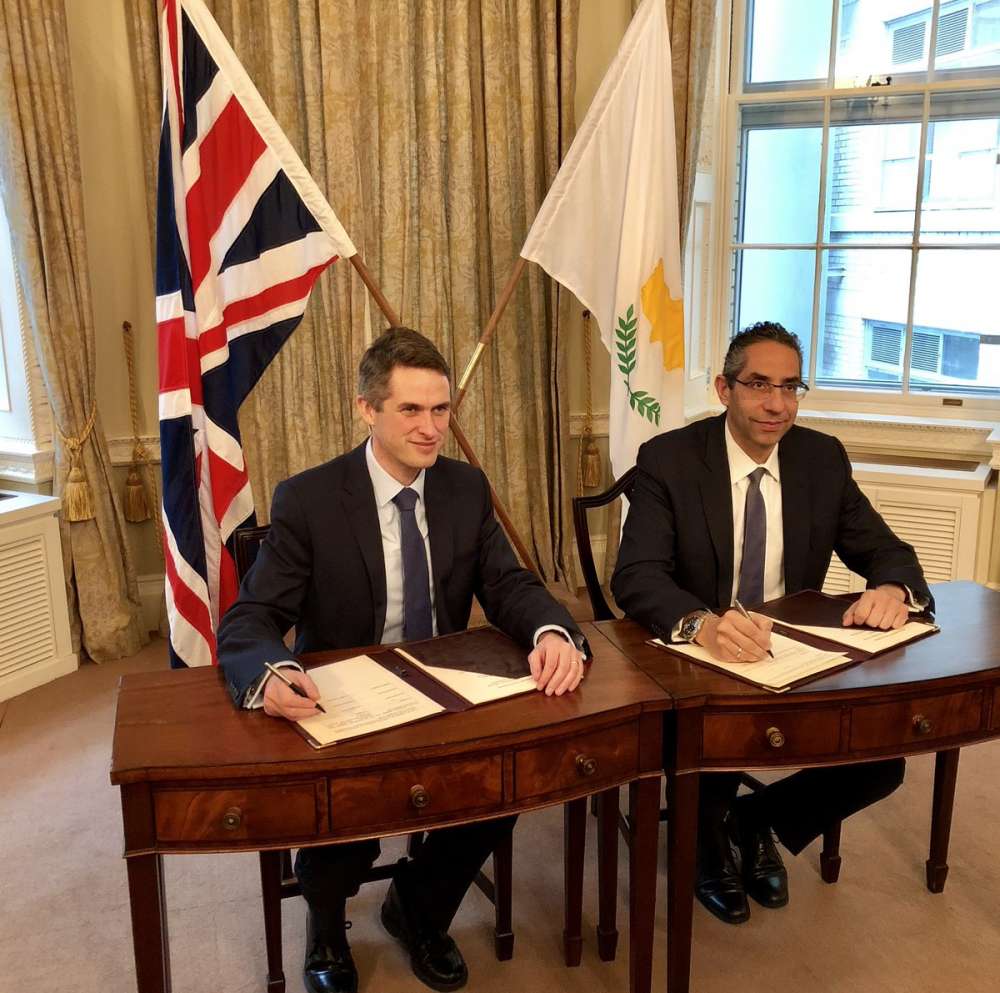 Cypriot Minister of Defence Savvas Angelides has said that the government’s “strategic objective” is to “transform the Eastern Mediterranean from a region of conflict into one of stability, security, development and prosperity.”

He was addressing an audience of diplomats and defence and security experts at London’s RUSI on Wednesday afternoon, on the first of his two-day official visit to the UK capital.

Signing this morning of an MoU on Enhancement of #Defence & #Security Cooperation between #Cyprus ?? Defence Min @AngelidesSavvas & #UK?? Sec of State for Defence Gavin Williamson MP @GavinWilliamson is tangible evidence of willingness to strengthen & deepen ties in these fields pic.twitter.com/8YnF0y2ATL

The Minister underlined the “catalytic” role that Cyprus has to play in the wider Eastern Mediterranean, acting as “a natural bridge” between the EU and the region.

“Cyprus strives to play a constructive role in the region, by being part of the solution and not part of the problem,” noted Angelides.

Referring to the hydrocarbon reserves discovered in the Cypriot Exclusive Economic Zone and their exploitation under the shadow of Turkey’s provocative actions, he stressed that they constitute a significant factor in guaranteeing the EU’s future energy security, through diversification of energy supplies.

“One of the strategic priorities of the Republic of Cyprus has been for the EU to focus more attention on the energy dynamics of the Eastern Mediterranean. The European Commission is already well aware of this dimension, since it has included the Eastmed pipeline in its priorities,” said the Defence Minister.

He also made special reference to the tripartite partnerships with neighbouring countries that enhance both Cyprus’s and the EU’s status in the region, as well as the partnership with international energy giants such as ExxonMobil, ENI, Total, Noble and Shell.

“Their presence and operations in the Cypriot maritime zones are a vote of confidence both to the prospects of new hydrocarbon discoveries and to the Government of the Republic of Cyprus itself,” Angelides said.

He added: “Cyprus has managed to become a pillar of stability in the Eastern Mediterranean through a network of tripartite partnerships and synergies, our active role in the security initiatives of the European Union as is the case with PESCO, but also with other initiatives such as MED 7, which include a wide range of areas, from political and economic cooperation to security, culture, innovation and education.”

On the matter of Turkey’s provocations, he commented that “it is clear that the strategic and geopolitical importance of Cyprus creates opportunities for alliances; alliances which will allow us to achieve our goals and address the challenges of Turkey on a diplomatic level.”

On the Cyprus issue he reiterated “in the strongest terms” the Cypriot government’s commitment to work for the reunification of Cyprus and its people through a comprehensive settlement of the Cyprus problem, in line with international and EU law.

“We clearly argue that a solution must not be based on the anachronistic system of guarantees of the previous century and thus we cannot accept the continued presence of foreign troops on the territory of the Republic of Cyprus and this is an argument that is universally accepted with the exception of Turkey of course. We are a member of the EU and thus the future defence and security architecture of the island should be consistent with the broader foreign security and defence actions of the EU,” said the Minister.

On his meeting with his UK counterpart he commented: “My presence and my meeting with my counterpart of UK is tangible evidence of our close and friendly relations and constitutes proof of the willingness of our countries to further strengthen and develop our relations in the fields of security and defence.”