Defence Minister: ‘Conclusions of the European Council send a clear message to Turkey’ 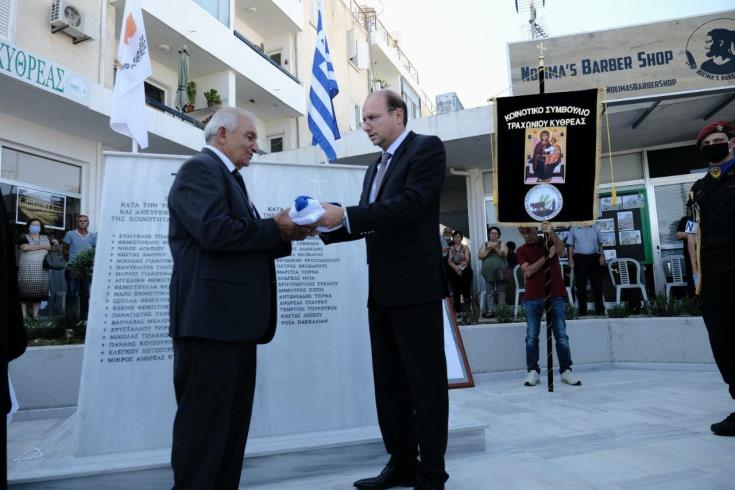 The conclusions of the European Council on October 1st send a clear message in all directions, confirming the full solidarity and determination of the European family to support Cyprus and Greece, said Cypriot Minister of Defence Charalambos Petrides in a speech, during a monument unveiling event for the fallen of Trachoni Kythreas community during 1974 Turkish invasion.

“It is a fact, that Turkey has to face up to its responsibilities as regards its next actions,” he noted.

Petrides noted that  at the Summit of European Leaders on October 1, the Turkish violations of the sovereign rights of the Republic of Cyprus were condemned, emphasizing that the delimitation of the Exclusive Economic Zone must be addressed through dialogue and negotiations in good faith and with full respect of law.

He added that European leaders had called for a speedy resumption of negotiations, under the auspices of the United Nations, in the framework of the Organization and in accordance with Security Council resolutions and European Union principles, with a clear reference to the return of the fenced off area of Varosha to its legal inhabitants.

The Minister  said that efforts to resume talks were constantly falling on deaf ears, with Turkey causing increasing problems, that prove the lack of any good will on its part to work in order to achieve a solution to the Cyprus problem.

In February 2020, the European Council placed two persons under restrictive measures, in relation to Turkey`s unauthorised drilling activities in the Eastern Mediterranean. On October 1-2, 2020, EU leaders strongly condemned violations of the sovereign rights of the Republic of Cyprus, saying that they must stop. The European Council also called on Ankara to accept the invitation by Cyprus to engage in dialogue, with the objective of settling all maritime-related disputes between the two countries.

The EU also warned to invoke, inter alia, Article 29 of the Treaty on European Union (TEU), in case of renewed unilateral actions by Turkey and said it would review the matter this December. Article 29 of TEU allows the Council to adopt sanctions against governments of non-EU countries, non-state entities and individuals.