Defence Minister: Aim is to continue the Republic’s energy programme 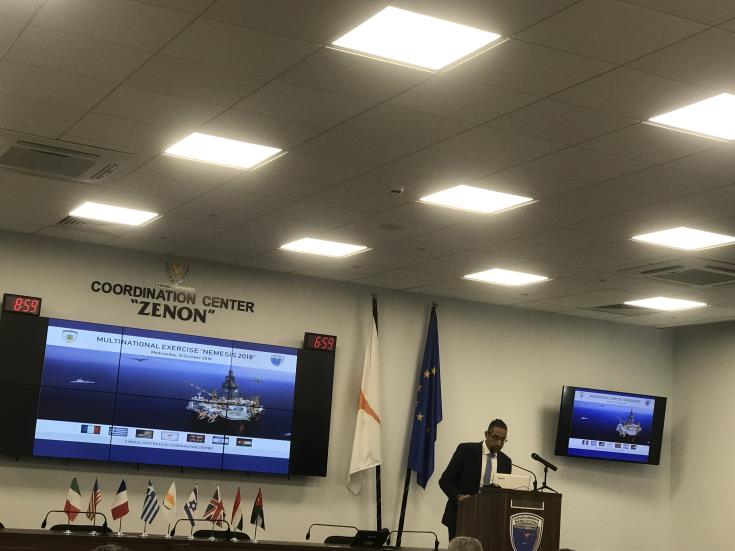 The aim of the Ministry of Defence, in cooperation with the country’s services, is to proceed with the energy programme of the Republic of Cyprus, without any hindrance, Minister of Defence Savvas Angelides said on Wednesday.

Speaking in Larnaca during the “Nemesis 2018” multinational exercise, which is being carried out in the Republic’s exclusive economic zone, Angelides said that the aeronautical forces of Cyprus and other countries are participating in the manoeuvres, as well as private companies.

“The aim of the exercise is to develop effective cooperation and coordination between these groups, in order to address dangers either on commercial ships and platforms, with scenarios that have to do with tackling terrorism, or accidents with mass rescues and sea pollution,” he explained.

Asked about this exercise, which is being carried out for the fifth consecutive year, Angelides said that “these recurring manoeuvres have essentially established us as a country that can offer the experience” and that there are other countries “interested in acquiring this experience to address the dangers.”

He also said that Cyprus’ aim was to develop relations with neighbouring countries with the purpose of strengthening security in the region, which in turn led to growth.

Commenting on the presence of Turkish “Barbaros” ship in Cyprus’ exclusive economic zone and the significant presence of naval forces belonging to large countries, Angelides said everything was running smoothly and that “we are working collectively with all the services of the Republic of Cyprus so that the Republic’s energy programme proceeds without hindrance.”

Commander of the Search and Rescue Coordination Centre, Commodore Constantinos Fytiris, said “Nemesis” was being conducted for the fifth consecutive year and that every year participations increase.

Fytiris said Cyprus, Greece and France always participate in the exercise, and that this year the United States, Great Britain and Israel are participating, while Egypt, Italy and Jordan have sent observers.

By In Cyprus
Previous articleRussia opens terrorism investigation after teenager blows himself up
Next articleDherynia, Apliki checkpoints to open at noon on November 12