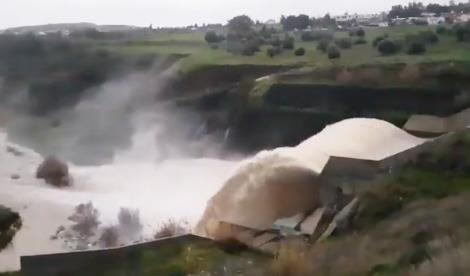 Cyprus’ dams are now officially more than half full after an inflow of 10.5 million cubic metres (mcm)in the past three days.

That is more than three times the levels on the same day last year when depleted water stocks stood at only 15% of capacity with 43.3 mcm and many dams almost completely empty,

Germasoyia dam, which last night became the latest to overflow, had only 510,000 mcm on this day last year — equivalent to only 3.8% of capacity.

Roussis said that this January has seen the best ever inflow of water into damsfor a month. A total of  103.4 mcm has flowed into the dams from January 1 to January 20, bettering the record set in January 2012 with 92.6 mcm but for the entire month.

According to the latest figures posted on the department’s web site on Monday, Asprokremmos -which is Cyprus’ second largest dam is 71.8% full.

By In Cyprus
Previous articleCypriot bank has properties on the market also in Greece
Next articleAyia Napa golf resort will have irreversible consequences on environment, study says