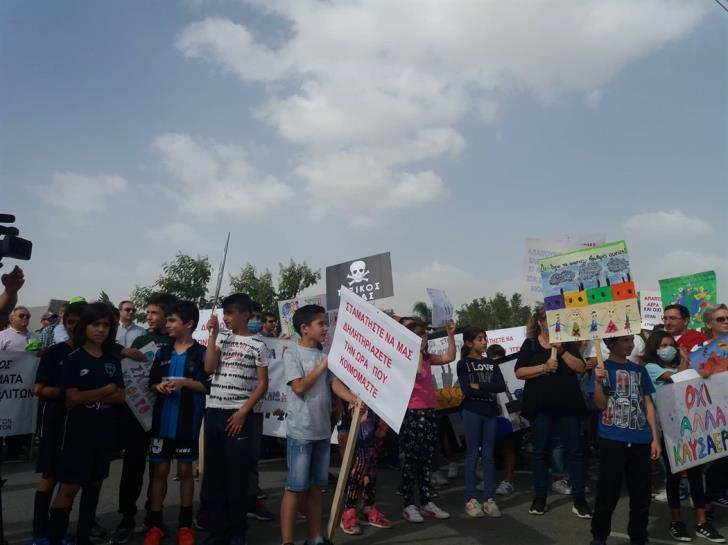 Residents of the Ayios Constantinos and Eleni parish in Dali have decided to take matters into their hands after years of having to live with  stench  and a choking atmosphere. The parish in question is literally surrounded by five industrial zones, with two of these described as a nuisance.

As a first step of the planned mobilisations, a proposal for a one-hour abstention from classes at the 3rd Elementary School was suggested for Tuesday, November 19, a proposal which is pending approval from the Parents’ Association due to meet on Monday.

The school, which is attended by 443 pupils, is located within periphery of the industrial districts of Latsia, Geri, Tseri, Idali and Pera Chorio, while some of the factories are only 290 metres from residences, which adversely affects the air quality that the local residents breathe. This is the only region in Cyprus which is surrounded by five industrial zones.

Speaking to Phileleftheros newspaper, the President of the Parents’ Association of the Third Elementary School of Idali, Kyriakos Kyriakou, made it clear that children’s health is not negotiable. As Kyriakou mentioned, children breathe harmful substances in the air on a daily basis which derive from the operations of asphalt production plants in the area.

Kyriakou explained that the problem has affected the area for five years, a period during which the residential and industrial zones have become one, and despite occasional interventions, actions and complaints, there is a lack of political will to resolve this serious problem which affects the quality of life and health of the local residents.

It is noted that the matter is now before an Inter-Ministerial Committee which was set up in early October and consists of four Ministries, while the issue has been addressed by the Environment Committee of the Parliament in the past.

An indication of the unbearable situation is the fact that local residents are even thinking of selling their homes and moving to another area, and especially since despite protests, no authority has taken stance.

It is worth noting that houses in the area existed before the factories since the area has been residential since 1973. However, the stakeholders ignored the situation and issued licenses to operate factories in the area, with the result of having noisy industries within residential zones, condemning residents to inhaling bad substances on a daily basis.